'Snowpiercer' an apocayptic metaphor chugging to the silver screen

No one seems to know if or when the movie Snowpiercer will open in the U.S. Having read the graphic novel, I hope it will – and soon. Snowpiercer’s road to American pop culture has been a long, strange journey. It began as a French graphic novel that South Korean director Joon-ho Bong loved, so he turned it into a 125-minute movie with an international cast – and dialogue that was 80-percent English. And that cast really is something: In addition to Korean actors Kang-ho Song and Ah-Sung Ko (The Host), Snowpiercer stars Jamie Bell (Billy Elliot), Chris Evans (Captain America), Tilda Swinton (Chronicles of Narnia), Ed Harris (The Right Stuff) and John Hurt (everything from Alien to V for Vendetta).

And apparently it’s good. Harvey Weinstein bought the American distribution rights after a special screening at the Berlin Film Festival, and Snowpiercer received five nominations from the Asian Film Awards. The film has already earned $60 million from its Korean release, and is scheduled to open in China in March.

But the movie’s American release ran into a snag, according to variety.com: Weinstein wanted to cut 20 minutes out of Snowpiercer, and the director demurred. Eventually a compromise was reached, whereby Weinstein won’t cut the film, but it will receive only limited release. Someday.

I suppose it’s only fitting that Snowpiercer the movie has a strange and possibly pointless journey, because that’s essentially what the graphic novel is about!

Snowpiercer 1: The Escape, which shipped in January, is the story of the remnants of humanity after a cataclysm has frozen the Earth entirely – temperatures remain more than 100 degrees below zero, except where those remnants live. Which is on a train.

And not just any train. The luxury liner Snowpiercer, according to advertising before the cataclysm, was to run non-stop on its own tracks with everything on board that you could want – food (grown or raised on board), drinks, drugs, sex. The train’s 1,001 carriages are pulled by a perpetual-motion machine, which gets its energy from the train’s own movement, provided the train keeps moving. And it is uniquely adapted to plowing through ice and snow because …

… well there’s no good answer for that. The Snowpiercer just happened to be precisely suited to survive the kind of cataclysm that occurred, ready and waiting for the elite to board her – and survive. How convenient!

That might have been the plan – we never find out – but if it was, the lower classes didn’t want to die, either, and thousands crammed on board before the train left the station (what station, in what country, is never specified). And as a result of all the great unwashed in the back end of the train, those in the front take great care to engineer a society in which they remain on top (in roomy first class, at the head of the train), with the middle class in the middle cars (where the hydroponic and meat-raising carriages also are) and the “Third Class” passengers in the “tail-end” – in filthy, crammed conditions in carriages that weren’t designed for passengers. 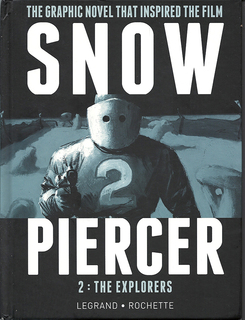 Meanwhile, the narrative is carried forward by a Tail-Ender named Poloff, who makes a desperate attempt to break into the Second Class cars by going “outside” and breaking through a bathroom window before he freezes to death. He is quickly arrested, but for some reason the elites want to interrogate him personally. The graphic novel is, essentially, his trip (and that of a woman who tries to help him) from the tail end of the train to the front, and all the mysteries, marvels and miseries he witnesses en route.

Meanwhile, the Snowpiercer barrels blindly on through the snow, with no destination and no hope, on a dead world. Is that also a metaphor, perhaps of the human condition? If so, what does it say of us that the train’s occupants pray uselessly to “St. Loco,” the god of the train?

All of which makes for a rich, albeit cold, stew. The characters are as familiar as today’s headlines, but there’s an alienness to it, too – not just the bizarre landscape the train hurtles through, but the UK-style artwork (and probably UK translation, given the slang). Written by Jacques Lob and Benjamin Legrand, and drawn by Jean-Marc Rochette in a style that reminds me of Judge Dredd, Snowpiercer 1: The Escape (Titan, $19.99) is the first English translation.

There is a sequel, scheduled for Feb. 26 release. Snowpiercer 2: The Explorers (Titan, $24.99) is about a second train, which the first train didn’t know about. The second book is a bit more action-oriented, but contains many of the same allegorical elements. But, if anything, it is even more downbeat than the first, so be warned.

Running even farther afield, according to reports, is the Snowpiercer movie. While the premise remains intact, it appears the film follows an attempted revolution by the tail-enders. (You can see a trailer for the film at http://www.youtube.com/watch?v=e-XG4BKGHx4). There was actually a revolt of a kind in the graphic novel, but it occurred before the story begins, and is couched – like almost everything in Snowpiercer – in a he said/she said from different viewpoints. For example, the elites refer to the (failed) mass effort by Tail-Enders to force their way into better carriages as “The Wild Rush,” while the Tail-Enders refer to it as “The Massacre.”

I’d recommend reading Snowpiercer as prep for the movie, but I can also recommend it on story grounds. It’s the sort of book that could launch a thousand college papers and coffee-shop conversations – or a personal journey of one’s own.

Thanks, Richard I changed it. Although "Sowdriver" sounds like an excellent book as well, or a band name.

"Snowpiercer" itself sounds like a good read too. I'll have to keep my eye out for it.

Geez! I should proofread once in a while! Thanks guys!