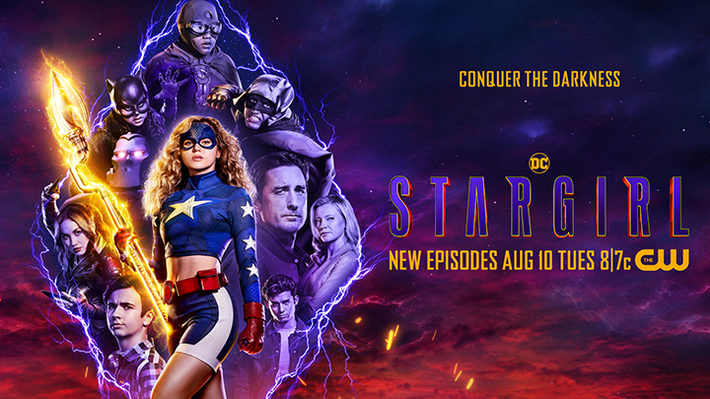 I did a search, and I didn't see a Stargirl thread... so here's one, fresh for Season 3!

In my opinion, it's an excellent superhero show, full of optimism and humor, with writing that's still sharp and from the heart. It's chock full of Easter eggs for DC fans -- especially Earth-2 fans -- and is presenting us with a young version of the Justice Society -- first with Stargirl and STRIPE, but also Wildcat, Dr. Midnight, and Hourman, with likely new additions Shiv and Artemis, and hopefully Jade and Obsidian will show up (or in Jade's case, return). Plus we've got the Shade, Eclipso, various members of the Injustice Society, and now Starman/The Star-Spangled Kid!

In the next post, I'll be discussing my thoughts on the season 3 premiere. Going to have to break out the spoiler emojis for that one. But if you're not watching this, and DC superhero shows are your thing, I urge you to give it a try! It's a ton of fun.

So we've got three main dramatic throughlines to Season 3, as I see it.  And the season's title, Frenemies, fits all three of these plots to a T. So let's have some spoiler space and talk about them.

...the death of the Gambler, who fought the team in an earlier season. This will probably be a basic murder mystery plot, with enough red herrings and misdirection to make the team (and other cast members) distrust each other, or in some cases heighten their existing mistrust.  Which brings me to the second throughline:

Courtney's insistence on forgiving her former enemies. Shiv, Artemis, The Gambler, Shade, Huntress, Sportsmaster -- they're all former enemies or rivals of one sort or another. Some have done worse things than others. Some of their reform is more sincere than others. But Courtney right now has an open-door policy on second chances. Is that laudable? Sure, she's got a big heart. Is it realistic? It's not likely that all of these bad pennies will turn up good. Is Courtney doing harm to her existing friends by forgiving these people? In some cases, yes.

Shiv, particularly, committed a transgression that isn't Courtney's to forgive. She leaked Yolanda's nude photos topless photo to the school. In welcoming Cindy into the JSA, Courtney is ignoring the real hurt Cindy caused, and ignoring genuine pain on Yolanda's part. That's going to cause conflict. I'm sorry it's not between Courtney and another character, however, as Yolanda already left the JSA last season.

And third, which I mentioned in another thread, is the return of Sylvester Pemberton -- Starman. I think Joel McHale is perfect in the role -- he makes a show of genuinely trying to be a better person, and he says he's giving up the staff for Courtney, but he's still considers Pat subservient to him, and his actions with the staff -- putting a display case right next to his bed -- is a far cry from wanting to distance himself from it. So we've got a returned-from-the-dead hero alive again under mysterious circumstances, coming back and starting to take the hero's place while his former sidekick is overjoyed to see him -- but still feels a little uneasy.

I think that's because we're about to watch The Return of Barry Allen, but played out with the Stargirl cast instead. I'm looking forward to it immensely.

Well thought-out post. I agree with everything you said (except I'd change the word "nude" to "topless" regarding Yolanda's photo (singular). But you're right: Shiv's transgression isn't Courtney's to forgive.

I commented elsewhere that Starman is thoroughly unlikeable (and yes, Joe McHale is perfect in the role). He completely disregards Courtney's feelings and lies to her. He's not much better with Pat, ignoring what he says, talking over him and referring to him as "sidekick" (even going forward) rather than "partner."

Thanks. Yeah, you're right about the circumstances of Yolanda's photo. I'll change that. And Joel McHale in this role is a real advantage here -- but it highlights another difference between Sylvester and Barry.  Readers had always -- or almost always -- seen Barry as kind and level-headed and inspirational. Besides being a hero, he was just a really good guy.  Whereas with Sylvester, we've already seen him as ego-driven and self-centered. So the audience might not have the shock of a hero falling off his pedestal that we did in the comics. On the other hand, we'll have Luke Wilson on hand to really sell the disillusion and heartbreak that represents.

I thought it was odd (and intentional?) to not show his body. I suspect that he wasn't the victim.

I never thought I'd see Dolores Winters in a TV series.

"The Return of Barry Allen"? It's "The Golden Age"!

"I commented elsewhere that Starman is thoroughly unlikeable (and yes, Joe McHale is perfect in the role)."

As of last night's episode, we now know exactly is going on with Starman.

One episode to go!

A Heartfelt Tribute to the Stargirl Series

Aww. That kinda choked me up.

A Heartfelt Tribute to the Stargirl Series

I enjoyed the series' final episode. I think it ended well.

Randy Jackson replied to Captain Comics's discussion Bond #4: 'Diamonds Are Forever'
"I do agree with you Commander that the Moore films tended to be sillier and relied more on stunts…"
4 hours ago

Jeff of Earth-J replied to Jeff of Earth-J's discussion Tales to Astonish
"THE INCREDIBLE HULK #102 - "Big Premiere Issue!" The conclusion of this story takes me…"
6 hours ago

Steve W replied to Steve W's discussion A Cover a Day
"Allow me to introduce another nurse. Here's Linda Lark."
7 hours ago

Jeff of Earth-J replied to Steve W's discussion A Cover a Day
"Before someone beats me to it..."
8 hours ago