'Stumptown' comes from a writer with long history of writing strong, interesting women

Oct. 3, 2019 -- On Sept. 25, People who gave the debut episode of Stumptown a try met an unusual woman, one whose life is a mess, but whose ability to manage violent, unpredictable situations is nonpareil.

Dex (it’s short for Dexedrine, which is a hint of how odd her life has been) Parios is a combat vet, in her mid-30s but acts younger, takes care of her mentally challenged brother, drinks and gambles too much and sleeps around to self-medicate her PTSD. In the first episode she sort of falls into doing a P.I. job for the owner of a Native American casino, one to whom she owes money.

Dex really isn’t that strange to comics fans, though, because she began her life on the printed page, created by one of the best writers – and writers of women – in the biz. His name is Greg Rucka, and he’s responsible for Tara Chace of Queen and Country, Carrie Stetko of Whiteout (they made a movie about her), Rowan Black of Black Magick (they need to make a movie about her), Forever Carlisle of Lazarus and Renee Montoya of Gotham Central (after the character migrated from Batman: The Animated Series). He co-created Batwoman (who is getting her own TV show) and wrote an acclaimed run on some female character named “Wonder Woman” (who I think also got a movie).

Stumptown is Rucka’s latest offering at Oni Press, a small publisher which specializes in quirky, character-driven and often very good material in which the Big Two comics publishers (Marvel and DC) have little interest. Oni is also where Whiteout and Queen and Country first appeared. Rucka and Oni are a good fit.

So are Dex and TV. I had a strange sense of déjà vu watching the first episode, which I couldn’t put my finger on. Then it came to me: The Rockford Files. The two shows star characters of different sexes, who have had different lives and were written in different eras, but the blue-collar grunge is there, the back-to-the-wall stubbornness, the collection of friends on society’s margins, the big heart hidden by cynical dialogue.

My observation was confirmed by writer Matt Fraction on the second page of the foreword to Stumptown, Volume 1: The Case of the Girl Who Took Her Shampoo (But Left Her Mini), which collects Dex’s debut, four-issue miniseries from 2009. (The first page explained how Fraction named his son, in case you were wondering.) "Stumptown begins with Jim Rockford and The Rockford Files at its heart,” Fraction pronounces confidently, before going into a glowing recitation of Jim Rockford’s many sterling qualities, including that he’s the kind of pal who’d help you move a couch. 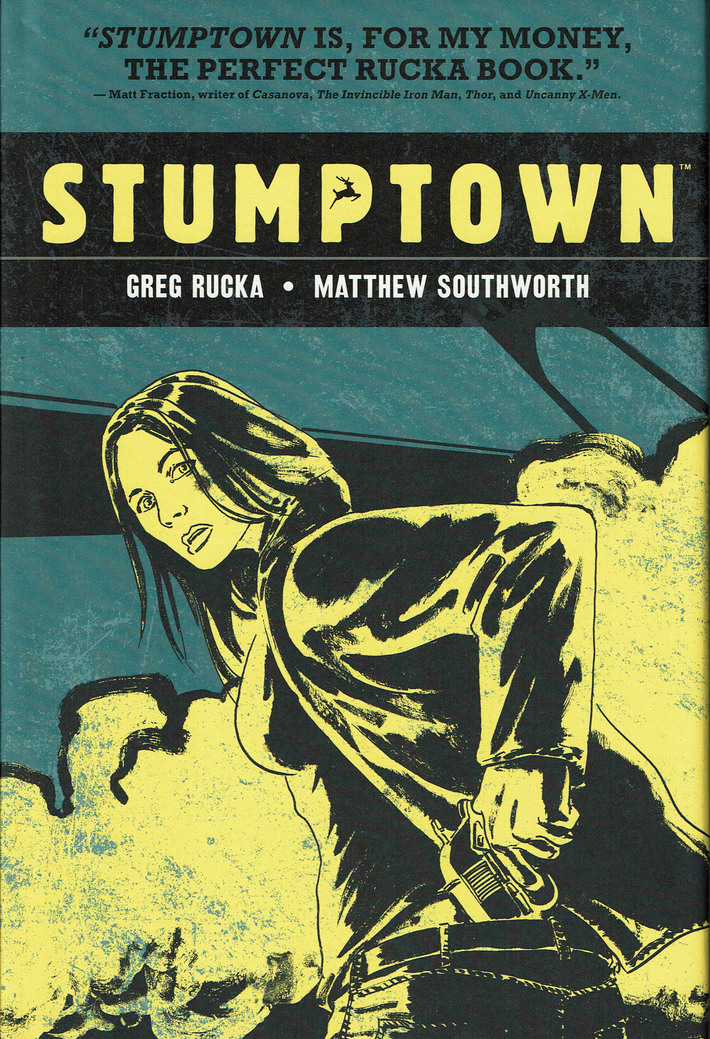 Stumptown: The Case of the Girl Who Took Her Shampoo (But Left Her Mini) collects the first story, which was adapted for the first episode of the TV show.

I really wasn’t sure where Fraction was going with this, but he’s a good writer (Hawkeye, Immortal Iron Fist, Sex Criminals) and I generally enjoy the journey to wherever he ends up, which usually feels accidental (but you know he’s planned it meticulously). He’s a comic book writer; his analogies are bound to be arcane and his logic not necessarily linear.

“Jim Rockford wasn’t magic,” Fraction continues, “he wasn’t particularly gifted as a crime solver or visionary in his methodology.  … Jim had his old man, a loose confederation of pals on either side of the law, and his own unwavering, unending, ineffable sense of right and wrong.” Which, you know, isn’t really much of a recommendation.

“And thus the magic of Dex,” he finally concludes, “our detective hero and the heart of ‘Stumptown’ itself, bubbles up from the grafting of the Rockford template to a Ruckan woman.”

Oh, so that’s where he was going. Feels like an accident, doesn’t it? (It’s not.)

Stumptown the TV show is blessed by having Cobie Smulders in the lead role. She’s already familiar to a generation of fans as Maria Hill in the Marvel Cinematic Universe and as Robin Scherbatsky in How I Met Your Mother. Comedy, drama, dramedy – Smulders has a broad range, and she brings every bit of her talent to bear as Dex Parios.

But Stumptown has its negatives, too. Oddly, one of them is that it’s on a big network, ABC.

For one thing, that means it needs network-sized ratings to survive. Take Supergirl as an example of this problem. The show debuted on CBS, but was going to be canceled due to low ratings. Instead it moved to The CW, where it’s one of the strongest shows CW has. The ratings didn’t change much – but the network, and the expectations, did.

Also, the premiere episode of Stumptown sometimes feels like a network show. I’m not sure how to define that, except to compare it to the terrific shows all over the streamers in this era of “Peak TV.” Shows like The Expanse on Amazon and Stranger Things on Netflix. These shows take their time, trusting that the audience won’t get bored and change the channel. They are often set elsewhere or elsewhen, opening up story possibilities that a show set in modern-day Portland won’t have. They take chances with their storytelling, killing off popular characters or abruptly changing the status quo.

Meanwhile, Stumptown is in a hurry. In some scenes, clumsy exposition dumps are saved only by Smulders and her fellow actors. And the first episode speeds through the entire first Stumptown story, which ran four whole issues on the comics.

That’s burning source material way too quickly. There’s not a lot of it. 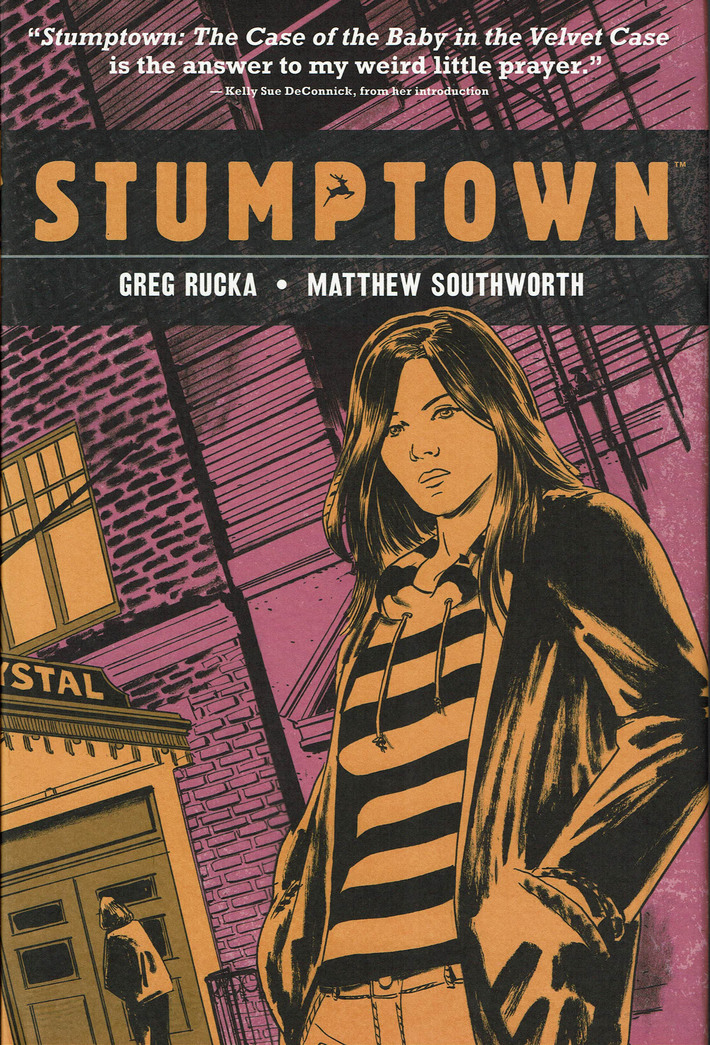 Stumptown: The Case of the Baby in the Velvet Case collects the second story in the comics.

That’s a grand total of 19 comic books, and the TV show has already run through four of them. At this rate, they’ll have to start dreaming up their own stories around episode six.

Which will be a shame, because the comics are written so much better. There are lots of twists and turns in the The Case of the Girl Who Took Her Shampoo (But Left Her Mini) comic book story that stun and surprise, most of which the TV show left out. We never meet, for example, the gangster whose children are at the root of the comic book story, and ends up owing Dex a favor. (That might be important later.) And we never meet those children, Oscar and Isabel, on TV. In one memorable scneen that sort of defines all three characters, the gangster calls thick-skulled Oscar “a thug” (he’s impressively incompetent) and clever Isabel “a deviant” (she’s gay, or maybe bi).

Now don’t you want to meet them? Sorry, only in the comics.

Stumptown the comics also give us more time with Dex, which is downright fun. Well, except for the part where she gets beat up, and shot, and taken for a ride. That’s not pleasant, but it’s part of the premise – Stumptown isn’t CSI, and Dex doesn’t have a police department behind her, and she’s usually in over her head. The danger is very real, and unfortunately Dex has the scars to prove it.

The comics also give us the artwork of Matthew Southworth, which is a huge plus as well. He can’t give us Cobie Smulders – he’d probably be a rich man if he could – but his artwork portrays the grunginess of the non-rich, non-touristy parts of Portland perfectly. He brings Dex’s grubby world to life so well you occasionally feel like you need a bath.

So yeah, Stumptown the TV show is pretty good, and will probably get better over time. But go ahead and read the comics, too – they’re already terrific, and maybe if we support them, Rucka will write some more. The world (and ABC) can always use more Stumptown.

I saw the Stumptown pilot and was suitably impressed. And yeah, the pilot covered the entirety of that first miniseries, but I don't know that you could get many more TV episodes out of it. A rule of thumb in scriptwriting is that a page of script equals about a minute of on-screen action; ergo, the average 47-48-minute TV episode (what's left after commercials, credits and promos) has a 47-to-50-page script.

How that works for translating comics to screen, I don't know. But since comics are less text-heavy than scripts, it wouldn't surprise me that it might take four 22-page comics to make one TV script. Although, as you point out, there's a significant amount of material that didn't make it on the air.

And hey -- they're supposed to be dreaming up their own stories for the TV show! Here's to a decent run!

Yep, with this show, I'm definitely more interested in them just taking the comic's situation and characters and running with them than in reproducing the various mysteries faithfully. I'm just happy to have a new Rockford-style show to enjoy!

I'm not attached to the comic's story arcs, either. I've only read the first volume (which I enjoyed, just haven't gotten back to the series). I like the show. I'm watching the third episode right now!

Permalink Reply by Doctor Hmmm? on October 10, 2019 at 12:08pm
I don't know the first thing about the comic. But this is a fun show full of actors I like. I hope Donal Logue will be a recurring character, even if ... strike that, ESPECIALLY if his character is an asshat.
I'm in.

Four episodes in, and I'm loving this every bit as much as I expected. Looks like Donal Logue is being set up to be a recurring character, but not a regular. I'm surprised at the most recent jailbreak development...I expected a slower burn with that storyline.

Regardless, I'm in for the duration, and hope it gets a full-season pickup.