The first photos of Melissa Benoist as Supergirl were released Friday, just as production begins on the CBS pilot, which is based on characters from DC Comics.

The costume (pictured) was designed by three-time Oscar winner Colleen Atwood, who also designed the suits for two other DC Comics television properties, “The Flash” and “Arrow” of the CW.

Atwood, who’s been nominated for Academy Awards an additional eight times, was also the costume designer behind “Into the Woods,” “Snow White and the Huntsman,” “Alice in Wonderland,” “Memoirs of a Geisha” and “Chicago,” among others.

“Supergirl,” in contention for the 2015-16 season, follows Kara Danvers/Kara Zor-El (Benoist, “Glee,” “Whiplash”), Superman’s cousin, at age 24, when she decides to embrace her superhuman abilities and be the hero she was always meant to be, after leaving Krypton and hiding her powers.

Helen Slater, who starred in the 1984 “Supergirl” feature, and Superman vet Dean Cain (“Lois & Clark: The New Adventures of Superman”) are set for secret roles.

The project hails from exec producers and writers Greg Berlanti (“The Flash,” “Arrow”), Ali Adler and Andrew Kreisberg. Sarah Schechter will also serve as an exec producer, and Glen Winter will direct the pilot. Berlanti Productions and Warner Bros. Television will produce.

Our satellite has four leads, meaning we could theoretically record up to four shows at a time (not that there's ever been that many good shows on at the same time).

Makes sense that LoT would be last in a potential crossover. Strategically, the strong show (or comic book) should always lead into the weak one.

Superman to appear in the first two episodes of Supergirl's second season.

It's not Season One, but just in case you haven't seen this picture: 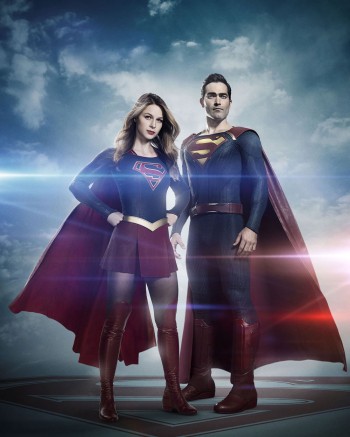 If you missed my column, LoT Season 2 will give us the Justice Society of America (or at least five of 'em), and a corresponding villain team named ... wait for it ...

Legion of Doom. I kid thee not.

Winner of the 2016 People’s Choice Award for

Deleted Scenes and a Gag Reel!

BURBANK, CA (June 2, 2016) – A new Super Hero will soon be flying into homes as Warner Bros. Home Entertainment releases Supergirl: The Complete First Season on Blu-rayTM and DVD on August 9, 2016. Delivering 10.9 million Total Viewers weekly, Supergirl is the #2 series on CBS amongst Men 18-49, just behind The Big Bang Theory and a Top 5 series on the network with Men 18-34, Men 25-54 and Tweens 12-17*. Fans can purchase the set which, in addition to all 20 exhilarating episodes, contains over an hour of extra content, including the 2015 Comic-Con panel, featurettes, deleted scenes and a gag reel. Supergirl: The Complete First Season is priced to own at $49.99 SRP for the DVD and $54.97 SRP for the Blu-ray including Digital HD. Supergirl: The Complete First Season is also available to own on Digital HD via purchase from digital retailers. Born on the doomed planet Krypton, Kara Zor-El escaped at the same time as her cousin, Superman, but didn’t arrive on Earth until years later after being lost in the Phantom Zone. Raised by her adopted family, the Danvers, Kara grew up in the shadow of her foster sister, Alex, and learned to hide the phenomenal powers she shares with her famous cousin. Years later, at age 24, and now living in National City while working as an assistant for Catco Worldwide Media mogul Cat Grant, Kara has spent so many years trying to fit in that she forgot to ever stand out. All that changes when she decides to embrace her superhuman abilities and become the hero she was always destined to be. With the help of Daily Planet photographer James Olsen, her bioengineer sister Alex, and the research of the super-secret, off-the-grid Department of Extra-Normal Operations (DEO), who are tasked with keeping the Earth safe from aliens, Kara takes to the skies to protect her world. (TBC)

With Blu-ray’s unsurpassed picture and sound, the Blu-ray release of Supergirl: The Complete First Season will include 1080p Full HD Video with DTS-HD Master Audio for English 5.1. The 4-disc Blu-ray will feature a high-definition Blu-ray and a Digital HD copy of all 20 episodes from season one.

11. Strange Visitor from Another Planet

13. For the Girl Who Has Everything

14. Truth, Justice and The American Way

The first season of Supergirl is also currently available to own on Digital HD. Digital HD allows consumers to instantly stream and download all episodes to watch anywhere and anytime on their favorite devices.  Digital HD is available from various digital retailers including Amazon Video, CinemaNow, iTunes, PlayStation, Vudu, Xbox and others. A Digital HD copy is also included with the purchase of specially marked Blu-ray discs for redemption and cloud storage through participating UltraViolet retail services including CinemaNow, Vudu and Flixster Video.

Warner Bros. Home Entertainment (WBHE) brings together Warner Bros. Entertainment's home video, digital distribution and interactive entertainment businesses in order to maximize current and next-generation distribution scenarios. An industry leader since its inception, WBHE oversees the global distribution of content through packaged goods (Blu-ray Disc™ and DVD) and digital media in the form of electronic sell-through and video-on-demand via cable, satellite, online and mobile channels, and is a significant developer and publisher for console and online video game titles worldwide. WBHE distributes its product through third party retail partners and licensees.

DC Entertainment, home to iconic brands DC (Superman, Batman, Green Lantern, Wonder Woman, The Flash, etc.), Vertigo (Sandman, Fables, etc.) and MAD, is the creative division charged with strategically integrating across Warner Bros. and Time Warner.  DC Entertainment works in concert with many key Warner Bros. divisions to unleash its stories and characters across all media, including but not limited to film, television, consumer products, home entertainment, and interactive games.  Publishing thousands of comic books, graphic novels and magazines each year, DC Entertainment is one of the largest English-language publishers of comics in the world.

Supergirl and all related characters and elements are trademarks of and © DC Comics.

The Baron replied to Jeff of Earth-J's discussion Dark Shadows
"Re-watching Journey to the Center of the Earth (1959).  I always forget that the…"
3 hours ago

Richard Willis replied to Jeff of Earth-J's discussion Sandman (TV)
"I didn't time them, but I only felt one was shorter than the others."
3 hours ago