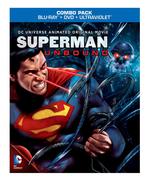 SUPERMAN: UNBOUND, the next entry in the popular series of DC Universe Animated Original Movies, arrives TODAY, May 7, 2013 from Warner Bros. Home Entertainment as a Blu-ray™ Combo Pack, DVD, On Demand and for Digital Download.

Based on the Geoff Johns/Gary Frank 2008 release "Superman: Brainiac," SUPERMAN: UNBOUND finds the Man of Steel aptly handling day-to-day crime while helping acclimate Supergirl to Earth’s customs and managing Lois Lane’s expectations for their relationship. Personal issues take a back seat when the horrific force responsible for the destruction of Krypton – Brainiac – begins his descent upon Earth. Brainiac has crossed the universe, collecting cities from interesting planets – including Supergirl’s home city of Kandor – and now the all-knowing, ever-improving android has his sights fixed on Metropolis. Superman must summon all of his physical and intellectual resources to protect his city, the love of his life and his newly-arrived cousin.

Just saw this. While I enjoyed the story, I didn't like some of the shots Director James Tucker decided to go with, assuming that it was all Mr. Tucker's idea. Some of the slow motion shots at the end just make Superman's arms and body look distorted and funny. The animation seems different also, almost as if they cut corners to get this released quick.

I hope Flashpoint comes out better.

The Batman movies are really good with the exception of Gotham Knight. Didn't really like that one. Obviously the Dark Knight Returns and Justice League: Doom are good, I thought, and you may want to check out.

Batman: Year One, while good, I thought could have been better with a more hardened Batman voice.

I also didn't care much for Gotham Knights (if that's the one with 3-4 stories, in manga style). I don't have Justice League: Doom, so I may check that one out. There was a Batman one where the clips I posted had a Batman voice I didn't care for, and that may be the one you mentioned -- didn't it have the Robocop guy as the voice? Whoever it was, it was too high-pitched; it almost made the dialogue comical.

Was Geoff Johns and Gary Frank’s 2008 “Superman: Brainiac” an original graphic novel or did it collect a storyline from the regular series (and, if the latter, which issues if you know)?

I bought the DVD but haven’t watched it yet; I don’t know if I’ve read the comic or not.

"Superman: Brainiac" is a storyline collected from a regular series: Action Comics #866-870.

Ah, thanks! I have read it, then. (I just couldn't recall which story it was under the title "Superman Unbound." I may pull it out and refresh it in my memory before watching the animated movie; I do like to compare and contrast a movie to its source.

I watched Superman Unbound and I realize now why I didn’t remember the original comic book story. It tells an origin story for Braniac that is completely at odds with the one I had thought was currently “in continuity” (whatever that means anymore). It’s quite possible DC changes universes on me when I was looking the other way, but as far as I was concerned, the DCU of Action Comics #866-870 was still essentially the same one we knew as “post-Crisis [on Infinite Earths].

DC has pulled this kind of thing before, notably with Supergirl. How many so-called “post-Crisis” versions of Supergirl have there been? Three? More? These versions of Supergirl weren’t contradictory, though; they were serial. Branic’s new origin in Superman Unbound, however, is completely at odds with his previous origin (still in effect as far as I know). I think old philosophy that the comic book readership turns over completely every four years or so might not be too far off the mark after all. It doesn’t apply to anyone on this board, obviously, but how many people do you know who started reading comics in 1985 that are still reading them today? 1990? 2000?

There’s not room on Earth-J for two versions of Branic (not in the same universe, anyway), so I simply chose to ignore Action Comics #866-870.

I have one more thing to say about Superman Unbound. We bought a copy of the DVD as a birthday gift for a six-year-old at the same we bought c copy for ourselves. I could have done without the scene of Lois Lane giving Braniac the double finger (that is, flipping him off with both hands). Tracy and I looked at each other and neither one of us had to say, “We gave this to Blake?” Tracy suggested the scene would have been just as effective had Lois turned her back in disgust.

Commander Benson replied to PowerBook Pete, the Mad Mod's discussion Anything, Everything, or Nothing At All
"It's been irritating, but we've always been pretty confident that her disability will…"
22 minutes ago

Philip Portelli replied to PowerBook Pete, the Mad Mod's discussion Anything, Everything, or Nothing At All
"Thanks, Commander! All the best wishes to Mrs. Benson! I know how frustrating it can be!"
33 minutes ago

Philip Portelli replied to Steve W's discussion A Cover a Day
"Neal Adams did a series of covers for the Tarzan paperbacks re-issued in the mid-70s."
36 minutes ago