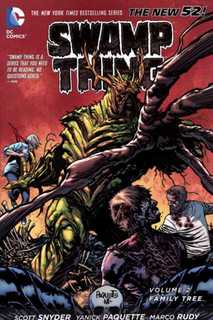 The New 52 Swamp Thing saga continues. The first part of the collection takes the regular series from Issues #8 - 11, where the main focus is Swamp Thing's battle with the forces of the Rot under Sethe's command. Swampy arrives girded for battle, complete with antlers and wings (don't remember ever seeing those before!). As usual his main goal is to rescue Abby, but of course that requires battling a huge army of rotten flesh puppets. When he reaches Abby she has been transformed into a kind of Rot avatar, so he has to fight her as well. Finally he reminds her of her humanity and breaks her (literally) out of her shell.

Abby takes the weakened Swamp Thing back to the swamp, where he reveals a nascent Parliament of Trees. They apparently are not gone forever, since he reached into the Green to save their essences. This sequence also features two other callbacks to the classic series: the appearance of Un-Men, and...wait for it...the reappearance of Anton Arcane.

After yet another battle, Arcane beats a strategic retreat back into the Rot, via some kind of portal. Abby urges Swamp Thing to stay away. But Animal Man shows up with his family and says that they need to enter the portal together, right away.

As always, Issue 0 is a retelling of the character's origin. Snyder uses the opportunity to weave Anton Arcane and Abigail into the entire history of the character, as the Rot does battle with the Green (and the Red) throughout time. Annual #1 serves as an introduction to the Rotworld saga, but the main story tells about the first meeting of Dr. Alec Holland and Abigail Arcane. Holland has forgotten it, for reasons that are explained in the story, and the Parliament of Trees allowed him to forget, regarding his love for Abigail as a weakness. I guess it was a successful strategy, because Holland directs his anger at Arcane, rather than the Parliament.

Snyder's writing brings the horror origins of the series back to the forefront, with able visual assistance from regular artist Yanick Paquette (guest artists Kano and Becky Cloonan also did a fine job on the zero issue and the Annual, and Francesco Francavilla illustrated one regular issue). Paquette frequently uses unusual panel design, which is especially good at depicting the chaos of battle. And there is a lot of fighting: one thing that sets this treatment apart from the typical Vertigo style is the emphasis on action. More action, less talking, less nudity, no profanity.