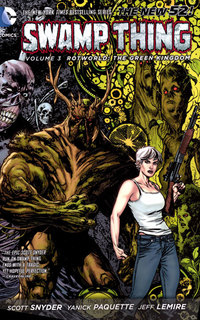 Scott Snyder's run on Swamp Thing comes to an "epic" end here ("epic" is DC's current favorite adjective, and it is a fair description of this story arc). The collection also includes two Animal Man issues which are necessary for the full story. When we last left the Swamp Thing (avatar of the Green) and Animal Man (avatar of the Red) they were about to enter a portal to go into the Rot and bring the battle to the Rot homeland. This turns out to have been a bad idea: it was Anton Arcane's plan to lure them in, so he could keep them there (where time moves differently than in the real world) while the Rot takes root in the world.

The two heroes return to a world transformed, where the Rot has infected nearly everything, including the superheroes. The next several issues are taken up by the odyssey to Anton Arcane's castle in Blestemat, in Europe. Abigail Arcane, Swamp Thing, and Amimal Man all make their way there, because it is the location of the Parliament of the Rot. Abby arrives first, alone, and makes her secret way into the castle to face Arcane. Buddy Baker and Alec Holland each arrive about the same time, with armies of superheroes. The War of the Rot involves all of these players, facing a group of superheroes transformed by the Rot.

So they must find a way to defeat powers like the Flash, Wonder Woman, and Superman. But ultimately they must get past Anton Arcane, the current Avatar of the Rot, and the architect of the Rotworld. The battle is epic--there's that word again--and includes such unexpected events as Frankenstein becoming a Green Lantern (I'm guessing that wasn't reflected in the Green Lantern titles, but it would be cool if it was).

In the end the life forces find an unlikely ally. The Parliament of the Rot regret their choice of Anton Arcane to be their avatar: the Rot never wanted to upset the balance of nature. Rotworld was purely Arcane's mad idea. So when Swamp Thing and Animal Man travel to the Rot again to help Abby in her struggle with Arcane, they get unexpected help. Abby finally accepts the mantle of Avatar of the Rot, a role which she has tried to escape for her whole life. This completely transforms her in both her role and her appearance, which seems likely to have an impact on the series going forward.