I forgot to mention the guest appearance of a blue beetle, just not the Blue Beetle.

The cover is an homage to that of original series #9, acknowledging the series "roots" (pun very much intended) while simultaneously indicating things would never be the same again.

(It's not an exact copy of the pose, but "After B.W." follows the signature which informs my assessment.)

I can't believe I thought I could lead (co-lead) this discussion as well as one on Adam Strange simultaneously. My original plan had been to get to this point in both discussions at the same time. The Swamp Thing collides with the Zeta-beam, which somehow throws the language translation aspect of the beam temporarily out of whack. The use of language this issue is interesting, although "Rannian" is still very much based on the structure of English. Knowing English sentence structure (where nouns and verbs and adjectives tend to fall within sentences) and being able to pick out a few proper names here and there make it possible to translate what the characters are saying. ("Adam, are you hurt?" "He's awake. You may see him now.") Of course, Alan Moore uses words in this invented language consistently, and you can bet he's worked out an entire syntax.

I am currently reading Fredric Wetham's Seduction of the Innocent and I cannot help but think of the chapter "Retooling for Illiteracy" in which he maintains that many-if-not-most of his patients don't read the words, anyway, but rather follow the pictures, maybe picking out a familiar word here or there, which hinders the process of learning to read. To my mind, however, this is a mark of good comic book storytelling on the part of the artist.

I felt like this was a well executed Adam Strange story that included a cameo by Swamp Thing. I kind of wish Moore had been able to continue it elsewhere(I'm not aware of any references to it outside of Robinson's Starman). I also think he does a great job of conveying that Rann and Thanagar are alien places.

Conveying alien places as well as making the reader understand the these Thanagarians are not benevolent. A lot can be illustrated with a grimace or threatening posture.

I wouldn't want them to feel captive but I'd love to know a pair of intelligent water beasts.

The only issue would be finding Thanagarians to feed them.

I wouldn't want them to feel captive but I'd love to know a pair of intelligent water beasts.

There was a three-issue Adam Strange series published in 1990 (by Richard Bruning and Andy Kubert), roughly at the same time as issues #93-95 of this Swamp Thing series.

I don't think that it was ever in continuity, but it follows from the status quo established in these Swamp Thing issues and takes it to situations that we would not expect from usual Adam Strange stories.

I felt like this was a well executed Adam Strange story that included a cameo by Swamp Thing. I kind of wish Moore had been able to continue it elsewhere(I'm not aware of any references to it outside of Robinson's Starman). I also think he does a great job of conveying that Rann and Thanagar are alien places.

Yet another great chapter.

The uniforms of the two hawkwomen in this reminded me of a Fred Hembeck gag from an old issue of the Comic Buyer’s Guide. I couldn’t find a pre-digitized image, so I photographed the page in the Hembeck Omnibus. It should be “magnifiable. 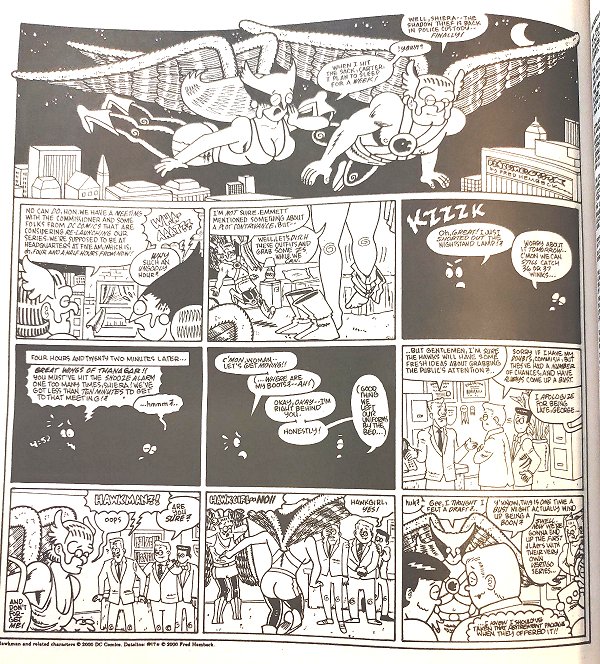 The Thanagarians' decline into corruption began with the Equalizer Plague (Justice League of America #117 "For I Have No Wings Yet I Must Fly!"), Hyanthis taking over, the war with Rann and the Hols' exile (Showcase #101-103) and Hawkmann battling his own people starting in World's Finest Comics #256 through these issues of Swamp Thing and then right into Shadow War of Hawkman!

Danny Horn reminds me of another potential member of the Parliament of Trees, the Bog Beast, mentioned offhandedly in his latest installment of his Superheroes Every Day blog, "The Other It" (about Theodore Sturgeon's "It").

The original printing of "Smalsh-Yegger" #58 contained an eight-page preview of the new Spectre series by Doug Moench and Gene Colan mentioned a few pages back. The Thanagarians continue to negotiate for Zeta Beam technology. It is Swamp Thing who suggests they may intent to use it to attack Earth. Speaking of Alan Moore and his presentation of alien worlds, why wouldn't a planet in a binary system have a "second noon"? Rann is slowly dying from a nuclear war centuries ago, but it is Swamp thing, not that Thanagarians, who ultimately ends up saving it. Adam Strange agrees to deliver a message to Abby and points Swamp Thing in a direction to resolve the issue keeping him from returning to Earth. An EYKIW regarding Adam Strange's purpose on Rann is introduced as Alanna announces she is "massient."

I'm not sure how Adam's presence alone could resolve Rann's fertility issues. Unless the Ranniabs and Adam have very different ideas about relationships, his "effect" would be pretty much limited to Alannah alone.

Not to mention, Adam is hardly treated like the "Champion of Rann" and more like a joke!

Richard Willis replied to Wandering Sensei: Moderator Man's discussion What Comic Books Have You Read Today?
"Lee Houston, Junior said: In case you're unaware of this, the Funky Winkerbean strip…"
2 hours ago

Richard Willis replied to Peter Wrexham's discussion Celebrity Mastermind - "The History of DC Comics"
"Luke Blanchard said: Famous Funnies started in 1934. Eastern Color was a printer which had…"
4 hours ago

The Baron replied to Captain Comics's discussion Bond #5: 'From Russia, with Love'
"And also explains why he looks completely different every few years.  Either that, or…"
12 hours ago

Irma Kruhl replied to Steve W's discussion A Cover a Day
"Sue and Sally Smith, Flying Nurses #54 (the last issue of the series)"
12 hours ago