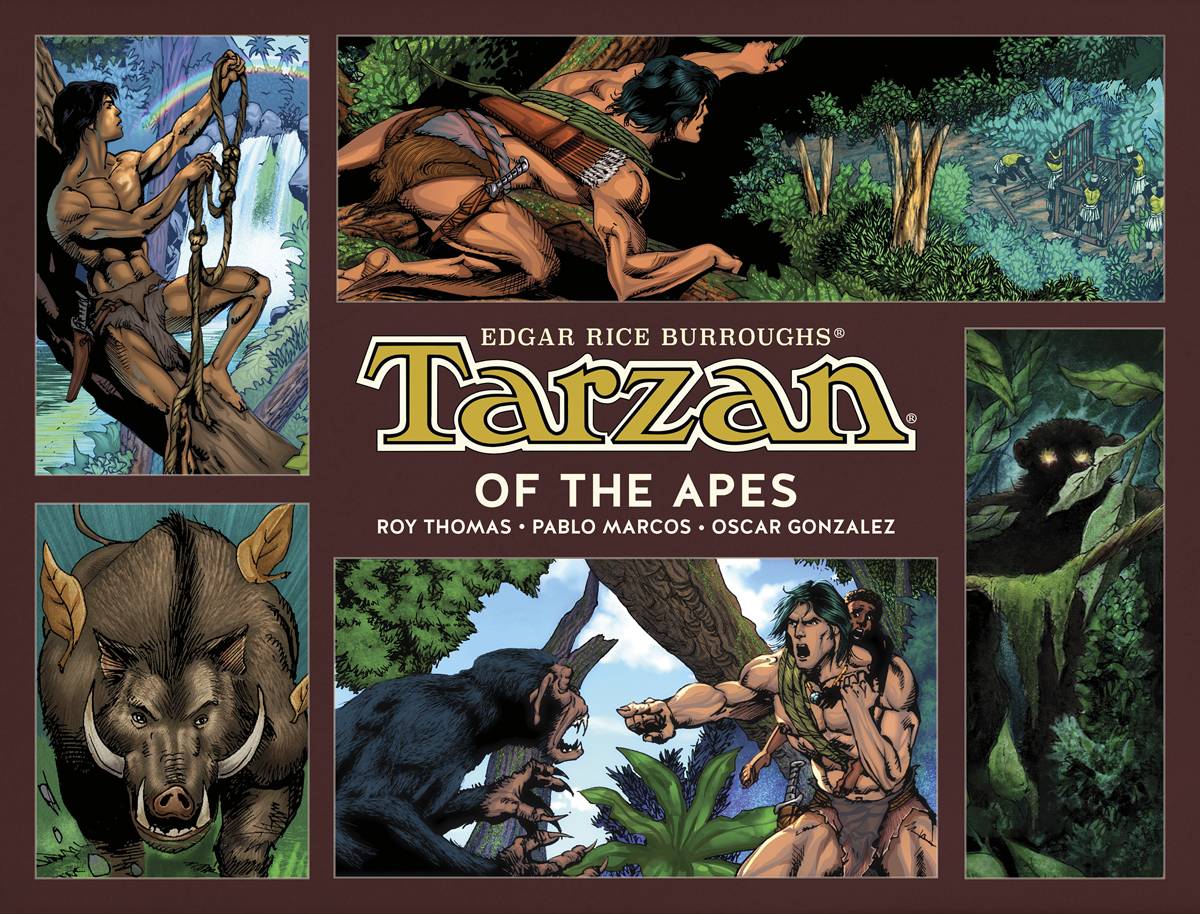 This shipped right on time last Wednesday, and I took a day off from my various "projects" to read it today. It is a beautifully rendered adaptation of ERB's first Tarzan novel, but an adaptation with a twist that makes it unique. If you're like me, you already have Tarzan of the Apes adapted into comics form by either Hal Foster or Russ Manning or Joe Kubert (and, if you're a lot like me, you have all three). So what makes this one different? The format, for one thing, but what I was getting at is the content.

After Tarzan became a success, ERB wrote Jungle Tales of Tarzan, a dozen short stories of Tarzan's youth inserted between chapters 20 and 21 of the first novel. Some of these short stories have been adapted into comics before, but what Roy Thomas and Pablo Marcus have done is to insert them into their proper place in the overall narrative. This volume adapts the first 20 chapters of Tarzan of the Apes and the first five stories from Jungle Tales of Tarzan. Future volumes will adapt the remaining seven stories and the rest of the first novel. To give you an idea of where the adaptation is in the narrative, this volume ends with strip #127 and Jane makes her first appearance in #243.

Manning wrote a piece about his favourite interpretations of Tarzan which Erbzine has placed online here.

I only sometimes like Marsh's art. It's too static and stripped down for me. The stories of his era can be dull too. But his nature art can be good, and his depictions of rural Africans look authentic to my uninformed eye. His art might look better in B&W. There are examples of it in B&W here.

I find it striking that Manning liked his work because I see their approaches as very different. Alex Toth had a high regard for Marsh too, but in his case I can see the similarity in approach.

Paul Norris also drew Tarzan comic books for Western. His work is close to Manning's, but less glossy and perfect. I very much like the story I have.

Travis Herrick (Modular Mod) replied to Alan M.'s discussion So, What Are You Reading These Days? (besides comics)
"Currently reading Jack of Spies by David Downing. This takes place before WWI, and Jack McColl is a…"
4 hours ago

Captain Comics replied to Captain Comics's discussion Bond #5: 'From Russia, with Love'
"I'm so confused! I made sure to watch Dr. No, From Russia With…"
9 hours ago

Jeff of Earth-J replied to Captain Comics's discussion Bond #5: 'From Russia, with Love'
""We haven't gotten there yet!" I'm so confused! I made sure to watch Dr. No,…"
11 hours ago

Captain Comics replied to Captain Comics's discussion Bond #5: 'From Russia, with Love'
"You might find this interesting: I knew all of that except the part that it was SMERSH that were…"
12 hours ago

Lee Houston, Junior replied to Steve W's discussion A Cover a Day
"Hopefully this situation will turn out well in the end... (Image courtesy of the Grand Comics…"
12 hours ago