After being cancelled in 1972, the Teen Titans made a couple of appearances in Brave & Bold as its members went their separate ways. However during the 52 and 100 Pagers, several of their stories were reprinted, most with that gorgeous Nick Cardy art. After sales and letters of DC Super-Star #1 and Super Team Family #1 and #7 came in, DC was convinced to give the Fab More-Than-Four another shot, reviving the series with #44 (N'76).

They reunited Robin, Kid Flash, Wonder Girl, Speedy and Mal, supposedly not seeing each for two years. And not being with Speedy since his drug addiction from Green Lantern/Green Arrow #85-86 (S-N'71), despite their early 70s Teen Titans and B&B adventures! Kid Flash and Speedy immediately start rutting as soon as they see Wonder Girl who plays along. Mal is upset that he's been tending to the Titans HQ all by himself even though he volunteered to do so! He namedrops Lilith, Gnarrk, Hawk and Dove as "whatever Happened To...".

But their reunion was all a trap by DOCTOR LIGHT whose weaponry (and dumb luck, to be honest) allows him to capture Robin and Wonder Girl and escape. This causes the other three to snipe at each other and split up.

Doctor Light tortures them to get the coordinates of the Justice League Satellite (of Love) so he can destroy it with a giant, orbiting magnifying glass (no, seriously!) then captures Kid Flash and Speedy separately, gathers them up and polishes off the Flash way too quickly.

Mal, angry about being left behind, goes through the other Titans' trophy cases and gets a super-strength giving exo-skeleton (from Batman #192) and the costume, helmet and shield of the Golden Age Guardian, thus becoming the Guardian II (or III, depending on the Golden Guardian from Jimmy Olsen). He flies the Titans' mini-rocket to the JLA Satellite, distracts Doctor Light, frees the other Titans and saves the day. The Titans decide to stay together!

The story was uneven and the art was rough. No one looked good here. Kid Flash and Speedy were more concerned about scoring with Wonder Girl, Wonder Girl keeps forgetting that she has super-strength, no way Robin tells any of this to Batman and Mal...

Well, I liked Mal as Guardian but it took him two years to realize that he needed to step up his game to hang with the Titans? Really?

Mister Jupiter gets referenced but Aqualad does NOT!

The text page was interesting as it mentions Beast Boy though he wasn't a member. And hints that Hawk & Dove may have retired.

Next: Just Call Me Angel of the Mourning! OR Blow It Out Your Ear! 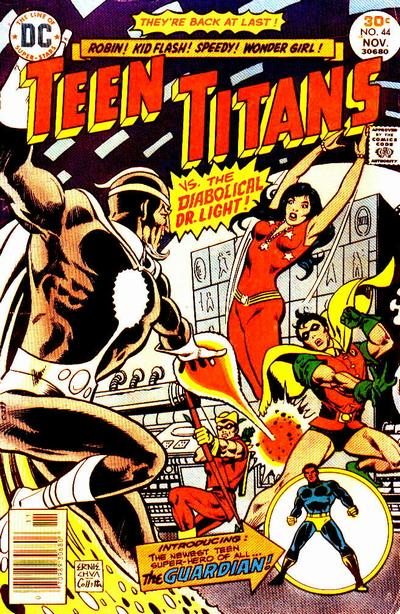 What a fun thread, thanks Philip. I was probably just the right age for these comics as I enjoyed these issues with an uncritical eye - I didn’t even notice back then that Gar Logan’s movie director was Julius Schwartz. On the one hand, well done Bob Rozakis for inventing some new villains, on the other...Flamesplasher? Captain Calamity?

Mind, Bob did come up with the Calculator.

My favourite members were Donna and Lilith, basically as a holdover from the spooky Haney days; going by her strength levels in the Titans West three-parter Lilith is among the strongest heroes around. Poor Garth, though, he really got the short end of the stick.

As for Mal, he still not had a sustained run as a costumed character - I rather liked the Geoff John’s take.

Thank you all for the kind words!!

#52 (D'77) starts where we left off with both teams facing each other as Lilith proclaims that she is the cause for all these disasters. Speedy immediately accuses the Titans' "resident witch" and the others of going criminal. This prompts a MASSIVE brawl whose highlight is Golden Eagle avoids getting hit by Bumblebee's ...butt! It's stopped by Wonder Girl and her magic lasso (more on that below). Under its influence, Lilith explains how she knows that Mister ESPer has been tapping into her mental powers to create these crises and have tracked him to Long Island, without explaining how they got there so fast!

The teams decide to split up so--

As the three teams depart, they say the last ones back buys dinner!

Aqualad summons a school of whales to push Long Island back into place with Beast Boy turning into a green whale with hair to help. (While "school of whales" is correct, the term more commonly used is a "pod of whales" and Aqualad should know that!). Golden Eagle and Bumblebee guide them from the air while Kid Flash and Dove feel left out!

Meanwhile the others confront Mister ESPer in mid-villainous monologue but he makes them brawl like they did before. And he is able to prevent Long Island from returning to its correct geographic place! Luckily Wonder Girl can still think straight and realizes that Lilith is the source of the Sinister Psychic's power and hurls Gnarrk into Lilith, killing her knocking her out! This frees the others and Long Island but Mister ESPer...vanishes in front of them without a trace!

Meanwhile meanwhile, at the Nassau County Jail, Bat-Girl and Harlequin discuss Robin and his relationship with the current Batgirl (see Batman Family) only to discover that Captain Calamity has...vanished! The trio take off on Robin's cycle with Harlequin being pulled along on her roller skates with nary a helmet or pads to be seen! On the still-torn Throg's Neck Bridge, they catch up to Captain Calamity and quickly recapture him as Robin proves that he is also...Mister ESPer!!! He had been creating "mental doubles" of himself in order to be in two places at once.

The Titans reunite for a huge pizza party that Robin grouses for having to pay for (as all the others roll their eyes!) and they take a photo of the occasion!

Wonder Girl saves the day twice this issue, despite getting smacked around by Lilith and Gnarrk.

I always wondered about her 'magic lasso' and if it's truly as magical as Wonder Woman's and where did it come from. My theory is that it's really a piece of WW's lasso as it is infinitely elastic.

Speedy is way abrasive, combative and obnoxious while Aqualad actually helps and not collapse!

Bat-Girl and Harlequin both have romantic designs on Robin!

There were plans apparently for a separate Teen Titans West book that never materialized (for reasons that will obvious next issue) that would have had Wonder Girl move to the West Coast while Bat-Girl returned to the East Coast. Perhaps two more heroes would have done this as well (Golden Eagle? Speedy?). Kid Flash would zip across the country and be on both teams!

The last time Bat-Girl worked with Robin was Batman #159 (N'63), eight months before Robin, Kid Flash and Aqualad meet in Brave & Bold #54 (Jl'64). Had she stayed around longer, could she, and not Wonder Girl, had been the fourth Teen Titan?

Next: The Beginning AND The End or Spare the Rod, Spoil the Titans 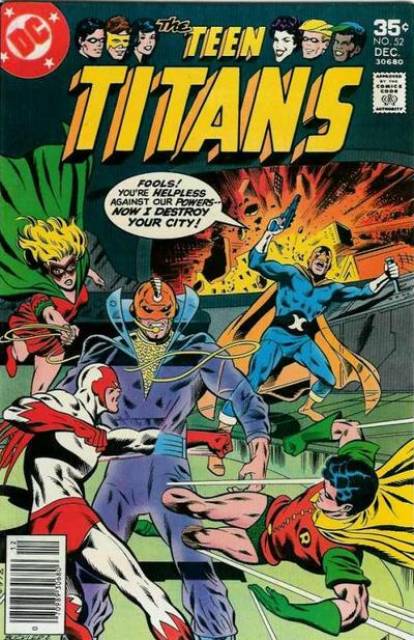 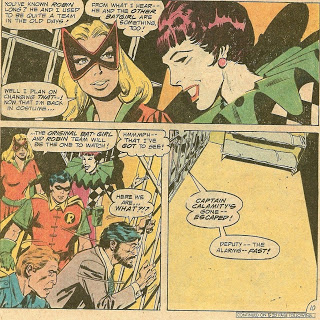 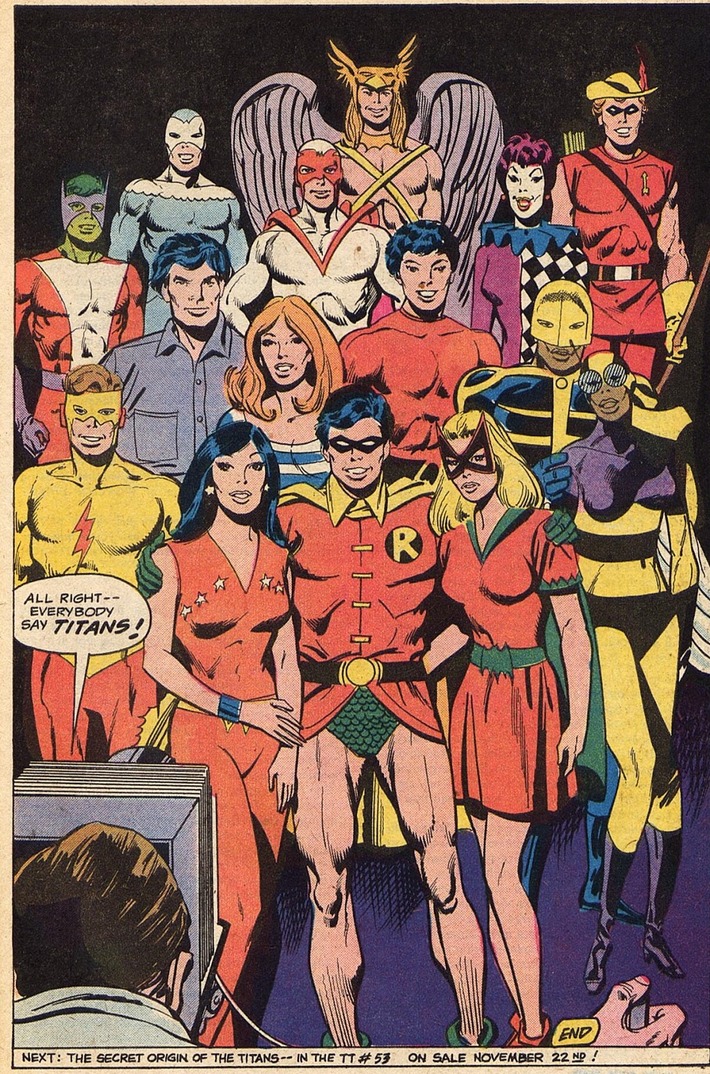 Great recap. That was such a busy issue, so much Marvel-style hero in-fighting, which I suppose supports the idea that DC wanted an X-Men-style book. I thought Don Heck and Bob Smith (Heck’s third inker in as many issues) did a pretty decent job I especially like page nine, dominated by the baddie... just done look at Speedy’s hat at top left!).

That photographer at the end who doesn’t fit in with the visual style of the rest of the book begged being looked up - presumably someone Bob Rozakis knew, the real Aaron Jarit apparently died in 2013 on our Earth.

Don Heck's work looked rushed and scratchy to me. I liked it a lot better during his run on Justice League of America.

Mister ESPer was certainly the most impressive looking villain this version of the Titans fought, certainly much more than when he originally faced Batman.

Also of note, the only Teen Titan West character on all three covers was Bat-Girl. Coincidence or foreshadowing?

I think that Bat-Girl's prominence here was mostly because he had intentions to use her more in Batman Family, altho ultimately, nothing really came of that.  If not for that connection, I'd have expected Aquagirl to have taken her spot in the Titans West roster, if only because she had been active more recently, and was beginning to appear in the Aquaman strip in Adventure right around this time.  Frankly, Tula was usually more interesting than Aqualad, but was handicapped by being a sidekick to the most useless Junior Partner in the DC Universe.  Since Bumblebee had already taken the "You Titans better stop disrespecting my man" role, I'm not sure what Tula could have done here, but I always found her conspicuous in her absence.  I also found it odd that Golden Eagle was able to recognize Bat-Girl at first sight, but only recognized Beast Boy as his TV character.  I guess Rozakis hadn't gotten the memo that Showcase #94 had established that the Doom Patrol had operated out of Midway City, Charley Parker's home town!

That's because Charley Parker only cared about Hawkman!

Come to think about it, we never heard Charley talk about Hawkgirl!

That's a very valid point that hadn't occurred to me.  Still, in order to have recognized Bat-Girl, he'd have to have been a big ol' super-hero fanboy!

Permalink Reply by The Baron 12 hours ago

Robin was "Mister Butt" even back then! 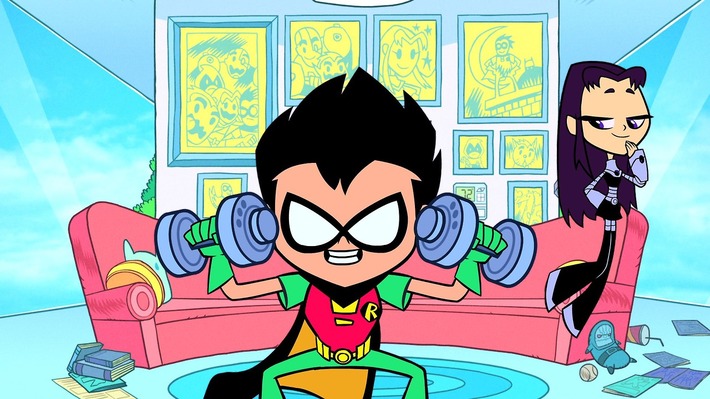 Well, they do go back a long time.