I have long felt that any good online discussion of a comic book series requires at least two active participants... not just two people posting, but two actually reading along... one to provide "play-by-play" and the other "color commentary." Tracy and I have considered leading a "husband and wife" discussion for some time, but we never could get the timing right. I first alluded to it in 2008 (I remember specifically), but I didn't announce the series. At the time it would have been Terry Moore's Strangers in Paradise, but that topic has now expanded to all the titles in the SIP-verse. With 3 issues in volume one, 13 in two and 90 in three (volume three comprising eight parts itself), Strangers in Paradise would be ambitious enough, but we also hope to cover...

We are approaching this with no set structure or timeframe involved. An issue at a time? A volume/series at a time? An issue a day? A volume/series/part a week? We don't know. All we know right now is that we plan to start with SIP v1 (the original three-issue limited series) sometime this weekend. the more people who participate the better the discussion is, so we invite as many of you to participate as possible, whether you read along with us or not. 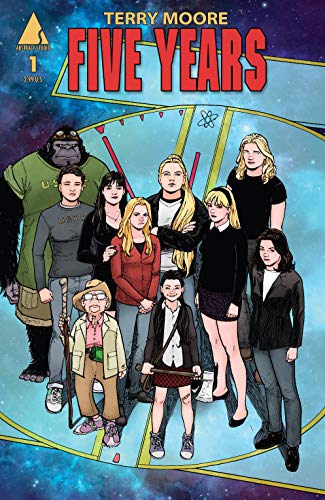 OK, now maybe you've reached a point at which you can tell me who's who on this cover.  I'm pretty sure that I've figured out which ones are Mike (It would be a twist if he wasn't the gorilla!), Sam, Francine, Katchoo and Zoe, but I'm stumped on the old person in the lower left and the four women on the right.

Several seconds of internet research leads me to believe that the old person is Libby, and the Amazon in the middle is Tambi Baker.

I know that the other three are Ivy, Julie and Rachel, but so far I haven't been able to work out which is which.

I'm thinking that the dark-haired woman in the lower right is Ivy Raven.  That leaves the Bronze Age Gwen Stacy looking chick and the blonde woman in the upper right.

Several seconds of internet research leads me to believe that the old person is Libby, and the Amazon in the middle is Tambi Baker.

I know that the other three are Ivy, Julie and Rachel, but so far I haven't been able to work out which is which.

It's harder tracking down these characters than I thought.  Library time's almost up, so maybe I'll get back to it later if I think of it.

Last guess for now:  The blonde woman in the upper right is Rachel, and Silver Age Gwen Stacy is Julie.

You anticipated me! All right, moving from left to right in a sort of drunkenly clockwise fashion we have: Mike, Sam, Francine, Katchoo, Tambi, Rachel, Julie, Ivy, Zoe and Aunt Libby as the Beaver. Now let's see what Tracy had to say about Strangers in Paradise XXV.

"In our house, if one of us knows more about the reading material than the other, and questions arise, the knowledgeable person says 'Keep reading'."

To be clear, I am the "knowledgeable person" in this scenario. :)

Tambi wasn't really concerned about their immunity in this case; her ultimate goal was to manipulate Katchoo into tracking down Lilith's phi papyrus to avert armageddon. To be fair, though, Katchoo should have seen through that.

"We got a double rainbow."

I thought that was on Skye. I walked across the road from our hotel to the stone pedestrian footbridge (which once was the main bridge) to watch the water flow. It was so swollen from the rain that the stream could be traced with the naked eye all the way back up into the hills. (I doon't think that would have been possible otherwise.) When I turned around to look back at the hotel, I saw that it was framed by a double rainbow. I had never seen a double rainbow before, so I rushed back to get Tracy and her cousins. We just had time to snap some pictures when I felt cold, thin needles on the back of my neck. Within 30 seconds it was pouring down rain. It was as if Scotland decided, "Okay, tourists. That's enough of a phot-op for you!"

"I guess her father has passed away."

I came to the same conclusion.

"I had to find out about the door and it wasn't revealed in the 10 issue series."

I wondered about that myself. Thanks!

UP NEXT: Five Years

I've been "sitting" on that cover since you started this thread.  It was one of the first things I saw when I looked Terry Moore up on-line, but I didn't want to post it until you reached this point.

STRANGERS IN PARADISE XXV OMNIBUS: I read this in a single sitting over the weekend and, man, did I miss a lot reading it initially in periodic monthly installments! This is so my favorite “independent” title. I like it more than Paper Girls, more than Stray Bullets. When I said (regarding the last issue) that I hoped that wasn’t the end, I didn’t know about Terry Moore’s follow-up series, Five Years: “One story. One world. Five years. That’s all we’ve got. Unless they can stop it.” Strangers in Paradise is basically reality-based; Echo is science fiction; Rachel Rising is fantasy; and Motor Girl is what it is. Moore brings these four diverse series together in XXV and creates the “Terryverse”; Five Years continues it.

By the end of XXV, the government has gotten ahold of a formula which could destroy all life. We’ve got five years, tops. If you’ve never read Strangers in Paradise before (or if you have, but haven’t read the other series), XXV really is a good jumping on point. You won’t be able to appreciate fully how well it fits together, but you’ll be able to appreciate it enough. It’s a fairly quick read, but fascinating, gripping. It will draw you in and won’t let go."

1) I did not remember re-reading this series one before three years ago.

2) Even though I labeled this post "SiP XXV Omnibus" I did not read the omnibus; I read it in individual issues. I probably titled it that because the omni had recently been released at that time and re-reading the series was the equivalent of reading the omni.

3) I have changed my classification of what genre each previous series is a sample of.

I was really quite excited when this series began. I liked the shorter series Motor Girl and SiP XXV, don't get me wrong, but I was really looking forward to seeing the five year countdown play out in real time. But here's a "spoiler" for ya: it didn't work out that way. Back on May 21, 2020 I posted my surprised reaction when I discovered #10 was to be the last issue. Then Bob posted a link to this video, released when Moore was working on #8, in which his wife "let's slip" that the series will be coming to an end with #10. (The video is 20 minutes long but she mentions it about a minute in.) I'm still curious as to how and why Bob knew about this video. Do you remember, Bob?

ISSUE #1: The series begin with a seven page sequence of Francine, Katchoo and the kids playing on a beach in Hawaii when the phi bomb explodes. Katchoo wakes up, disoriented by the nightmare and confused by the fact that she's covered in... popcorn? Sitting nearby, Francine's mother Marie says, "I've been throwing popcorn at you for ten minutes. You were having a bad dream. It's a good thing you woke up, I was about to throw the bowl at you."

Katchoo and Marie have a good relationship these days, playful, a far cry from when Marie was first introduced. Katchoo has been having these nightmares about the end of the world ever since she learned we're on a five year countdown. After a lightly humorous five-page scene, she goes to bed and wakes up at 3:00AM to another nightmare. She goes out on the porch for a cigarette, but is busted by Ashley and Koo (because of course they're up). Libby and Sam (and Mike) are also in Hawaii with them. the last two pages are narrated by Sam. Mike helped Sam get through three tours in Irag and now he's helping her get through this.

When I answered your question about the cover, I thought my post would be the very next one. I didn't see your next four until just now. You must have been posting at the same time I was answering. You got them all correct except you mixed up Julie and Rachel. (Note Julie's glowing eyes.) Unless you have an actual copy, you probably can't see Rachel's red eyes and the rope burn around her neck, but they're there.

No idea, now.  I must've just stumbled across it, somehow.

I'm still curious as to how and why Bob knew about this video. Do you remember, Bob?

So Rachel is the Gwen Stacy look-alike and Julie is the bigger woman in the upper right?

When I answered your question about the cover, I thought my post would be the very next one. I didn't see your next four until just now. You must have been posting at the same time I was answering. You got them all correct except you mixed up Julie and Rachel. (Note Julie's glowing eyes.) Unless you have an actual copy, you probably can't see Rachel's red eyes and the rope burn around her neck, but they're there.

"So Rachel is the Gwen Stacy look-alike and Julie is the bigger woman in the upper right?"

Correct. I thought my answer was going to be right below your question, so here it is again, closer together. John Dunbar replied to Commander Benson's discussion Deck Log Entry # 240 An Empty Chair
"Commander, my deepest condolences to you and Cheryl, your family, and Rick's family and…"
7 hours ago

Richard Willis replied to Steve W's discussion A Cover a Day
"I looked and looked for a cover with the Golden Age Green Lantern fighting a wooden robot. Came up…"
8 hours ago

Richard Willis replied to Steve W's discussion A Cover a Day
"so is Flash a puppet or a robot?  A puppet needs a puppet master and strings, a robot is…"
8 hours ago

Dave Palmer replied to Commander Benson's discussion Deck Log Entry # 240 An Empty Chair
"My sincerest condolences to you and your family."
9 hours ago

Travis Herrick (Modular Mod) replied to Alan M.'s discussion So, What Are You Reading These Days? (besides comics)
"I am currently reading Intellectuals and Race by Thomas Sowell. Dr. Sowell, took a couple of…"
9 hours ago

The Baron replied to Steve W's discussion A Cover a Day
"Featured on the cover:  Sakamoto, the Shinonome family cat, who can speak as long as…"
11 hours ago

Lee Houston, Junior replied to Steve W's discussion A Cover a Day
"Sorry to miss yesterday. Couldn't be helped, but to make up for it... While I would learn of…"
13 hours ago

Jeff of Earth-J replied to The Baron's discussion Movies I Have Seen Lately
"CASINO ROYALE: No Time to Die was, I think, the last movie Tracy and I saw in theater before…"
15 hours ago