I have all of the treasury-size books from Marvel and DC from back then -- got them off the rack, most were reprint, meant very little to me. Bought 'em because I bought everything. (Even the Rudolph ones!) It's really a joy to hear what they mean to others. Now I appreciate 'em more!

One of the things I appreciate most about the tabloid books is the sheer size of them. I was a much smaller person when I was 7 or 8 than I am now, but comics have stayed at relatively the same size. But tabloids bring me back to something approximating my original comics-to-human ratio!

To paraphrase Norma Desmond: "I am big....it's the comics that got small!"

Superman met the adult Legion for the first time in Superman #147 (1961). That was where the adult Legion of Super-Villains was introduced, which was why they were only seen as adults until Adventure Comics #372. That Saturn Girl was going to marry Lightning Lad was first shown in Action Comics #289 (1962), where Superman kisses Saturn Woman not realising she's married.

In Adventure Comics #354 Superman travelled into the future and had an adventure with the adult Legion. The story revealed what was to happen to more Legionnaires. In #355 they fought the Legion of Super-Villains after he went home. The stories read like imaginary stories, but they were supposed to be in-continuity, and later Legion stories by by Jim Shooter, Cary Bates and Paul Levitz treated them that way. Hence Matter-Eater Lad entered politics in Superboy #212 and Chemical King died in Superboy #228.

The cover of Adventure Comics #354 shows Superman looking at statues of Legionnaires who died in action. The Legionnaires shown are Ferro Lad, Chemical King, Quantum Queen, Reflecto and Shadow Woman. Of these characters only Ferro Lad had appeared; the story in which he died appeared the previous issue. There's a similar scene inside. Chemical King and Shadow Lass were introduced later in the 60s, and Quantum Queen also as a member of the Wanderers.

In the early 80s Gerry Conway and Roy Thomas did a "Reflecto" story. But Levitz and Giffen broke with adult Legion continuity in Legion of Super-Heroes #300. #299 teased that Shadow Lass's death was approaching: she and Mon-El went to the Science Asteroid, which the plaque on Shadow Woman's statue said she died saving; she put on white-make up (as the statue was coloured) and declared she was changing her name. In #300 the Science Asteroid is attacked, there's a full page of her being caught in an explosion... but at the end of the issue we learn she's survived, signally the break. Levitz did subsequently bring Polar Boy into the Legion, though.

I've always theorized that Polar Boy wasn't allowed to join for the same reason Bouncing Boy was: they liked Chuck, and didn't like Brek. They were teenagers, after all, and didn't make the best decisions.

If you look at it, it was shown that Dream Girl (IMO the most useless of the Silver Age Legionnaires) got in primarily because the guys thought she was hot. Matter Eater Lad had to talk his way in.

I've always theorized that Polar Boy wasn't allowed to join for the same reason Bouncing Boy was: they liked Chuck, and didn't like Brek. They were teenagers, after all, and didn't make the best decisions.

You've pointed that out before, and I've always felt it was a keenly perceptive observation on your part. That's why I've incorporated it into more than one of my Deck Log entries about the Legion. Most significantly, in my piece on Polar Boy's rejection for Legion membership. The salient portion reads:

Polar Boy has every reason to feel optimistic. He read the membership brochure. Under the age of eighteen---check. Courageous and of good character---check. A genuine super-power, which he can fully control---check and check! That’s why it comes as such a crushing blow when the Legionnaires reject him.

“Your power is unusual,” Sun Boy explains. “But it might freeze and disable us at a critical moment!”

That’s the Legion for you; everything is about them. Any reader over the age of six must have seen the lack of logic in refusing Polar Boy membership in the Legion. His power was the elemental opposite of Sun Boy’s and certainly would be useful against arch-villains. (Stan Lee certainly had that figured out when he introduced The X-Men later that same year, and included a teen-age hero with the same kind of powers.)

The matter of Polar Boy’s rejection suggests something. While the official qualifications for Legion membership were explicitly laid out in the first clause of the group’s constitution, it’s handy to assume that unofficial considerations were taken into account, too.

For one thing, it would explain why the Legion didn’t have four or five members from planets where all of the population possessed the same super-power. There didn’t have to be a codified prohibition against admitting other members with the same powers (and, as I have pointed out before, there wasn’t one), because that kind of thing sorted itself out during the Legionnaires’ closed-session deliberations.

“I’m not sure we need another shape-changer in the club.”

“I agree. Besides, Durlans are kind of creepy.”

“Tell me about it. Every time I take a sonic shower, I always get the feeling that Chameleon Boy is watching me, disguised as a soap dish or something. Ugh!”

“Then we’re all decided---rejected, right?”

It would also account for how some of the heroes with less-useful abilities made it into the group:

“Look, guys, all this Luornu Durgo can do is split herself into three girls---three normal girls without super-powers.”

I remember giving you credit for the same observation in the conclusion of my piece on Lightning Lad's culpability in the death of Zaryan the Conqueror.  And it deserves to be credited; what you point out---the natural biases of teen-agers---provides a plausible in-fiction reason for the eccentric behaviours of the Legionnaires.

(By the way, because I'm told some readers want to see such things, the article which I excerpted can be found here:  http://captaincomics.ning.com/profiles/blogs/deck-log-entry-112-so-... )

What happened to Polar Boy in LoSH #28, by the way, BROKE my HEART.

I've always had a soft spot for the Subs.  My first letter to the editor (not published) fiftyish years ago was a member by member reason why each of the Subs should be in the Legion.  Try fitting all of that on one postcard.

Commander Benson notes that it is Sun Boy who breaks the bad news to Polar Boy that his powers might go haywire at any time and disable the Legion.  Being charitable to the Legion, I think the implication is that Brek is younger than the typical Legionnaire and doesn't quite yet have total control over his powers.  However, it is a bit cheeky that it is Sun Boy delivering the bad news.  If his power went haywire at the wrong time, his teammates could be roasted, suffer heatstroke, be blinded, or suffer debilitating sunburns.

Actually, of the Silver Age Legionnaires, including those who did join after Polar Boy was rejected, the "haywire" danger applies to many of them, including the three founders (Cosmic Boy, Lightning Boy/Lad, Saturn Girl).  Others who could disable their teammates if their powers went out of control include Sun Boy (obviously), Star Boy, Element Lad, Lightning/Light Lass, Princess Projectra, Shadow Lass, and Chemical King. Post-Silver Age I believe the "haywire" powers excuse was used to reject future Subs Infectious Lass and Porcupine Pete.

There was an excellent Annual (IIRC) towards the end of the original run that kind of tried to revitalize the Sub's with the New Karate Kid and possibly that ' Starshine' cadet (quantum something?) - led by Cosmic Boy and Night Nurse/Girl that I thought showed promise.

I think the character you're thinking of is Comet Queen, who had a cosmic-Valley-girl style. There were two Kid Quantums, but I don't think either had appeared by that point.

I remember the Comet Queen group. There was a purple strong guy whose name I forget (Jed something?), and I think Cosmic Boy's younger brother. Were they being trained by Chuck and Luornu? It may have been Legion Academy.

Of course, I may be thinking of an entirely different Legion. That's a danger when you have multiple versions! 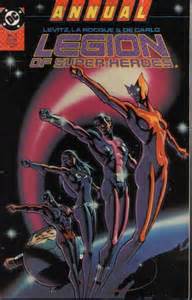 There was an excellent Annual (IIRC) towards the end of the original run that kind of tried to revitalize the Sub's with the New Karate Kid and possibly that ' Starshine' cadet (quantum something?) - led by Cosmic Boy and Night Nurse/Girl that I thought showed promise.