And here's the group I was thinking about. Purple guy (who is kinda grayish in this shot) was Jed Rikane, Power Boy, who could make himself super-dense. (Har, har.) Note presence of Comet Queen. 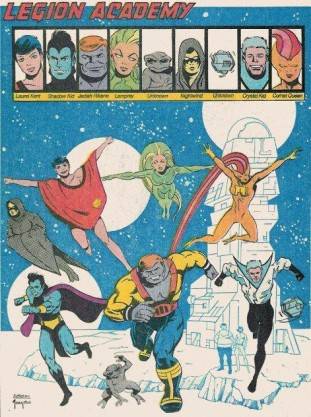 Cap, when you mentioned the Legion Academy, I immediately thought of this issue: 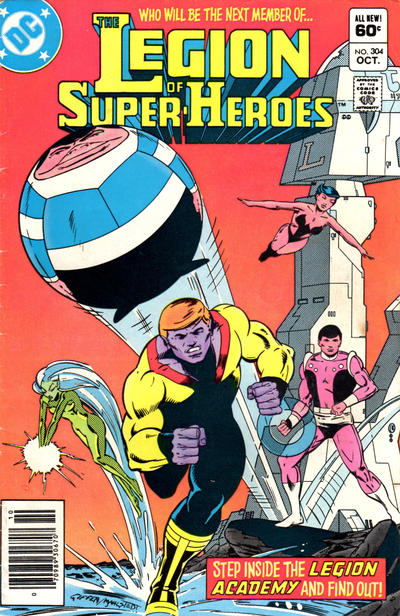 Notice above the heading it says "Who will be the next member of ...".    The Legion was down to "only" 21 members with the resignations of Karate Kid and Princess Projectra, following their wedding.  Instead of the usual open cattle call, the LSH looked only at the Academy students for their next members.  So who joined?

The answer was none of them, revealed on the final page.

Attending Legionnaires debated for three hours, continually bringing up names of dead LSH members and probability of fatal encounter while in Legion service.

At this point, 4 Legionnaires had fallen in battle:  Ferro Lad, Invisible Kid, Chemical King, and one of Luornu's 3 bodies, which is how she went from Triplicate Girl to Duo Damsel.

EDITED TO ADD:  In this story, the Academy kids demonstrate good use of their powers but it was noted they needed a lot of work on teamwork, as in combining each others' abilities.  We also saw a few instances of immaturity from them; at one point, the four ladies get in a brawl with each other in their dorm rooms (over whether or not Wildfire was a jerk, of all things).  The only one in this story who eventually joined the team (prior to 5YL) was Magnetic Kid, after Cos retired.

This is probably a good time to mention that I first started reading LSH in the mid 1980s.  Up to 1984 I mostly stuck to Marvel books although I was passingly familiar with DC.  I knew very little about the Legion, other than it was set in the future, had a lot of members, and was sometimes the subject of derision among Marvel loyalists.  My first issue was #309, part three of the four part Omen and Prophet storyline.  I was unimpressed with it and didn't buy another issue until after the series started reprinted the Baxter issues, my next issue being #329, which reprinted the 4th Baxter issue, featuring the death of Karate Kid.  I was no doubt mesmerized by this admittedly very busy cover by Eduardo Barretto. 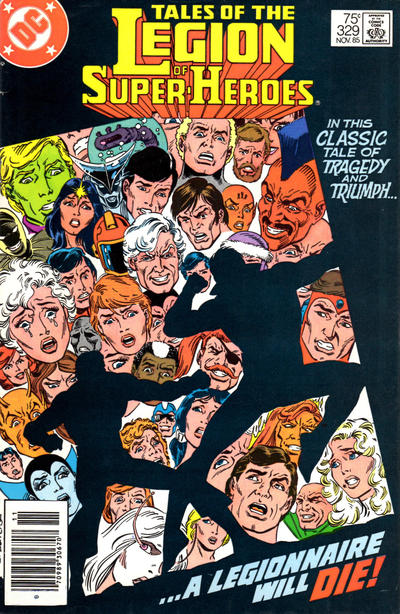 This issue and the next one made me a fan.  Val's death, and Jeckie's vengeance, made a powerful impression on me.  I was hooked, and from that point on became a lifelong fan of Paul Levitz, Keith Giffen, and Steve Lightle, and I tried to track down as many back issues as I could.  LSH 284-306 and the first 35 issue of the Baxter series are my all time favorite runs.  The original series lost a step when Giffen began swiping the from the South American artist Munoz and COIE really threw a monkey wrench into the series, although to be fair, Levitz tried gamely to make it work.

I'm not a big fan of the early stuff although it does harm a certain charm to it.  I don't care much for sometimes simplistic stories or John Forte's art.  It gets much better when Shooter started writing it and Curt Swan's art (especially with Murphy Anderon on inks) is always nice to see.  I haven't read most of the 1970's stuff and I really hope the series starts getting the Omnibus treatment so I can.  I liked Five Years Later although I've only read the first year.  The Post-Zero Hour stuff is pretty good.  Maybe I'm the only one, but I liked the Waid/Kitson series.

Sensei mentioned it in his OP and I agree - the concept has been hurt by not sticking with one version for very long in the past 20 years.  I'm hopeful that since there hasn't been an LSH book in a few years that the next time we get a series with a fresh new start, respectful of the history of the team, but not beholden to it.  Hopefully any new version doesn't hit the reset button in short order.

I thought that Jed Rikane guy would join, because they seemed to be pushing him. He was in virtually every Academy story -- not all of them were -- and he was always center of the group shots. And for some reason I thought there was an implication that I should know him, like he'd been mentioned in some early Silver Age story or was related to someone or something. But I didn't know him, and never figured out what the mystery was all about.

Commander Benson notes that it is Sun Boy who breaks the bad news to Polar Boy that his powers might go haywire at any time and disable the Legion.  Being charitable to the Legion, I think the implication is that Brek is younger than the typical Legionnaire and doesn't quite yet have total control over his powers.

That's charitable to the Legion, indeed, Mr. Palmer, as the story of Polar Boy's ill-fated attempt to join the Legion contains not a single hint that he cannot fully control his power.  To the contrary, in fact; after he totally he ices up the Legion meeting hall, Polar Boy immediately raises the temperature and removes the ice in the next panel.

That Polar Boy could not fully control his powers has been one of the rationalisations that Legion mavens have concocted over the decades to justify his rejection and, in particular, Sun Boy's comment.  Another rationalisation has been that Polar Boy was rejected because he was considered too young.

There's nothing in the story to support that contention, either.  Although Polar Boy was depicted as being noticeably shorter than the Legionnaires, or his soon-to-be Substitute-Hero teammates.  But that could easily have been the natural size for inhabitants of the planet Tharr in their mid- to older teens.  Still, one could extrapolate that Polar Boy was younger than the average Legionnaire.  But I feel this goes more to Randy Jackson's point that, for all their efforts to act as mature adults, the Legionnaires often gave way to typical immature teen-age thought processes.  In this case, they didn't want Polar Boy around because he was so small and, possibly, younger than the Legionnaires by a two or three years; and to the Legionnaires, it would be like having your kid brother tagging along whenever you tried to do something.

But, of course, they couldn't tell that to Polar Boy---the Legionnaires were representing themselves as being mature---so they blew him off with the "your power may disable us at a critical moment" bull.

There was a statue of "Power Boy" along with statues of other deceased Legionnaires in the Adult Legion story in Adventure 354, but it's only shown in one panel.  We only see Power Boy's boots, and while there's a wreath in front of the statue, nothing is inscribed on it.  He's not featured on the cover, unlike other heroes. 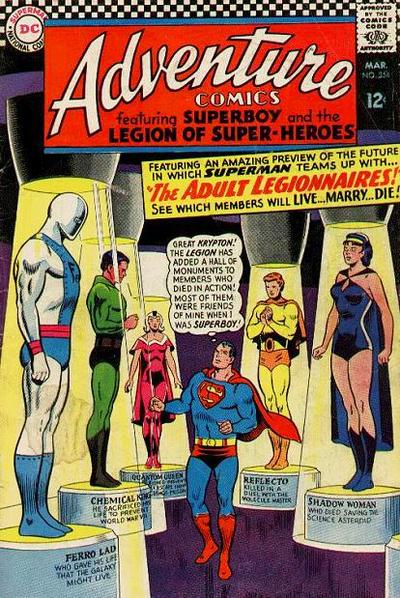 Hokey smokes, John Dunbar! That explains everything! I was probably the only long-time Legion reader who didn't remember that -- they kept dropping abstruse hints that just baffled me.

Also, that informs the Levitz story. Probably every reader expected Power Boy to join and die, and then Levitz deliberately wrote "better no new Legionnaire than a dead one." I'll bet that flipped out a lot of long-time fans as a deliberate variance from the Adult Legion story.

That's news to me, too. Thanks, John.

I got lucky; I googled "Jed Rikane Power Boy" and the first thing that popped up was the panel from Adventure 354 with his statue.  Having started to read the series in the 80s, to me Jed was merely one of a multitude of minor background characters in LSH.

Just last weekend I read the 5 Years Later issue #31. This is the story where we learned (20-some years ago) that Shvaughn Erin was actually Sean Erin, who was a male originally. Sean had been taking a pill called Profem to make himself into a female so that he could have a relationship with Element Lad.

It was unclear, but it seems that maybe Jan Arrah (Element Lad) knew about this ahead of time to at least some extent. Under the rule of the Dominators, Profem was suddenly unavailable, and Shvaughn was turning back into Sean. Jan is seen breaking into a pharmacy to see what Profem was made of, seeing if he could replicate it.

I remember reading this book in 1992--far less understanding times as far as the trans-community goes (including myself, I have to admit)--and being pretty heartbroken over it. This story was way ahead of its time. Watching Sean go through what he did (or what she did; pronouns can be tricky here), was seriously a hard thing to see. Watching Jan go through it too, and the confusion over what was the right thing to do, was also really hard. Keith Giffen, Tom and Mary Bierbaum, and Colleen Doran (with Curt Swan too!) told a great story that still sticks in my memory banks, and reads just as well today.

This is part of a much larger story, but it also stands on its own quite well.