I was born in 1969, making this show a little before my time.  Growing up, I didn't catch it in re-runs because we lived in the boonies and only had two channels.  It was the early 90s before I had access to  multiple cable channels.  I may have noticed it then but promptly dismissed it.  After all, as a good comics fan who grew up in the 80s, wasn't it my duty to be embarassed by this campy relic of a time long passed?

Flash forward to 2012.  The Cartoon Network here in Canada has this show on every night, so I decided to give Adam West and company a try.  I'm enjoying it more than I thought I would.  Sure, "campy" is the perfect description, and I find Burt Ward grating at the best of times.  I'm not sure Commissioner Gordon and Chief O'Hara would take a bathroom break without calling in Batman.  And sure, it's formulaic and repetitive at times.  But there's still something fun there.  And Adam West seems to be the only one playing it straight, respectful of the character and not chewing the scenery too much, at least not as much as the others.

For those of you who were there at the time, what did you make of it all then?  And how did it go from being such a craze to being cancelled so quickly?  Am I correct that it hasn't been released on DVD?  I don't ever recall seeing it anywhere.

The Riddler looks a little off but the Batman and Penguin figures are spot on!

Hopefully when they do the Joker, you can see the mustache painted white. ;-)

Which Mister Freeze would they make?

Or maybe he just wants to take credit for it, since it has become so famous.

I believe I read, probably in Star Trek Memories, that it was somehow staged so that they would do two versions, one with the interracial kiss, which is over-acted so heavily to show they are struggling against their will.  And then they were supposed to do a second version, which would be much more tame, and probably would not have included the kiss, and that's what the network was going to use... but according to Shatner's version, they either broke for lunch, or hammed it up, or broke character, or whatever, just to thwart the network suits who insisted on the second version, and in so doing, assured that they had to use the first and only version successfully shot. (If you can believe Shantner.)  I just don't recall accurately what he says they did to assure that.

Also, it occurs to me that had the network or anyone else who wanted to blunt the scene could of had the scene re-edited, so that as they clutched, and struggled against the power, cut-away to reaction shots of the other actors or characters, and cover up their big moment.  But whoever was assembling the show, put the master shot in, and the music cues to support it, and we have what we have...

The network wanted the kiss between Kirk and Uhura really toned down, if not eliminated. William Shatner, to his credit, opposed that so we have the scene today. Or maybe he just wanted to make out with Nichelle Nichols! ;-)

Why is Batman wearing a nappy?

Actually I'm a bit shocked that he's smoking at all! What's next? A line of Marvel's Cigar-Smokers (The Thing, Nick Fury, Wolverine, etc)? 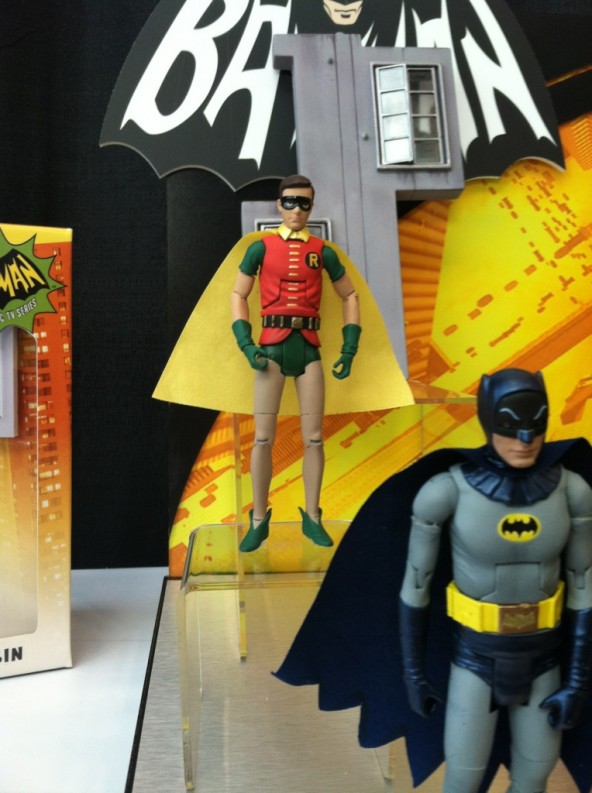 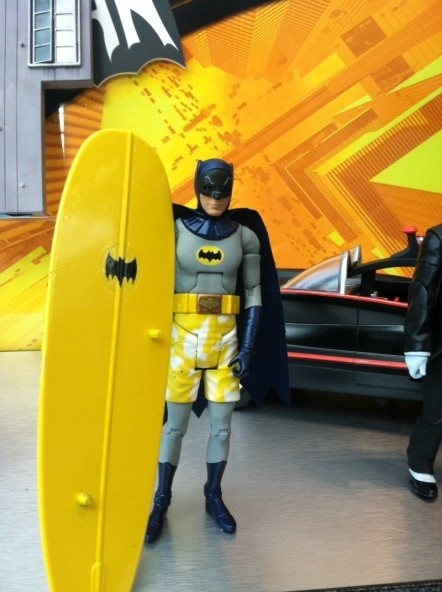 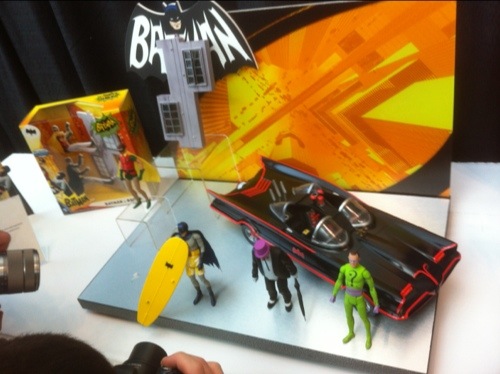 They NEED to build a BATCAVE playset!!!

As to the original question of how fans felt when the Batman TV show was originally aired, I was conflicted. In 1966 I was a senior in high school. Only two years earlier Julius Schwartz (and Infantino!) had rescued Batman and Detective Comics from their purgatory of silly stories under Jack Schiff. The Schwartz-edited stories were not grim and gritty, but they were a major improvement. I hated the impression the show gave that comics were for little children and idiots. OTOH, it was all we had at the time. I appreciated the Riddler, Penguin, and Catwoman shows better than the others. As was said, the Stanley Ralph Ross scripted ones were easier to take.

There was talk a few years ago that Fox were using some claim they had on Watchmen as a bargaining chip to get DC to budge on the Batman TV series.

The recent parallel is the Spider-Man movies. As I understand it, as long as Sony/Columbia continues to make them they retain the rights instead of the reverting to Disney/Marvel. They seem (at least publicly) to be smart enough not to strangle the golden goose.

Desilu was one of the most amazing production companies during its existence, especially as they were family-owned.

I think the reason Desilu gave the green light to Star Trek in the '60s was that family-owned companies can afford to make gut decisions, not having to squeeze the last penny out for stockholders.

.......probably would not have included the kiss, and that's what the network was going to use... but according to Shatner's version, they either broke for lunch, or hammed it up, or broke character, or whatever, just to thwart the network suits who insisted on the second version, and in so doing, assured that they had to use the first and only version successfully shot.

I recall an interview (I think at a convention) of Nichols where she told this story. They screwed up all the takes of the tamer version so that they ran out of time or money and had to use the version that aired. Of course, the version that aired showed Kirk and Uhura both being very uncomfortable with being forced to kiss each other, which probably made it more palatable to some demographics. Any other woman, Kirk would have been into it an a major way. Meanwhile, Shatner and Nichols had fun kissing more than 25 times.

Adam West was MY introduction to the very bizarre concept of "costumed crime-fighters" (super-heroes). As a kid, age 6-1/2, I wondered... "What's with the costume?" But then I got used to it.

Frank Gorshin, and to some degree, George Sanders, were SCARY. Even Julie Newmar, at least in her 1st story. The rest of the baddies, not so much, although Penguin trying to toss Bruce Wayne into a FURNACE was scary as hell. (And the irony of it was, he didn't know who the guy was!!!) Lorenzo Semple Jr. may have been the best writer & script consultant, as he somehow understood the "balance" of drama and weird humor.

But William Dozier HATED doing the show, it was pushed on him by his boss, William Self (the guy who had actually laughed his ass off at the Playboy Mansion watching the old serials). I strongly suspect Dozier may have felt that after all the hard work put in by so many that first season, that the show was still "TOO GOOD"!!! So he promoted his worst writer, Charles Hoffman, to story editor. Hoffman's scripts were not funny-- they were just "stupid". And a lot of people apparenty didn't know the difference.

Yes, Ross's scripts were probably the FUNNIEST. He did most of the Newmar Catwoman stories, and most of the King Tut stories, and the really goofy ones, with Shame. ("Are you sure he's Mexican?") The Shame stories are like watching NIGHT COURT. Like they wandered in from some other show entirely. George Sanders' story also feels lhat way-- only in his case, it's like it wandered in from some serious drama. Imagine if the entire series had been done like that!  (Come to think of it, THE GREEN HORNET-- was.)  Also, the 2nd Riddler story, the one with the abandoned power station generator death-trap, where he spends half the story thinking they're dead... that 2nd episode took place mostly AT NIGHT, and the director used a lot of shadows and offbeat camera angles. It was like a Jerry Robinson or Will Eisner comic! Imagine if the entire series had been done THAT way!!! Every time I re-watch it, I keep thinking, with only a LITTLE more effort, this could have been SO much better! Except, I'm convinced, Dozier preferred it just like it turned out. (GRRRR)

Isn't it mind-boggling that Desilu did both STAR TREK and MISSION: IMPOSSIBLE the same year???  According to the M:I book, they'd been doing pilot after pilot for several years without a single sale, and were running into financial danger. Until Lucille Ball practically BLACKMAILED the network execs into taking her new shows. ST & M:I fans owe it to Lucy for those shows ever getting on the air at all!

Which makes it all the more sad that she (foolishly) took her 2nd husband's advice 2 years later to SELL the studio to Paramount... That was the beginning of the end.

"Batusi" Batman and The Joker.  Still no sign of the Catwoman figure though. 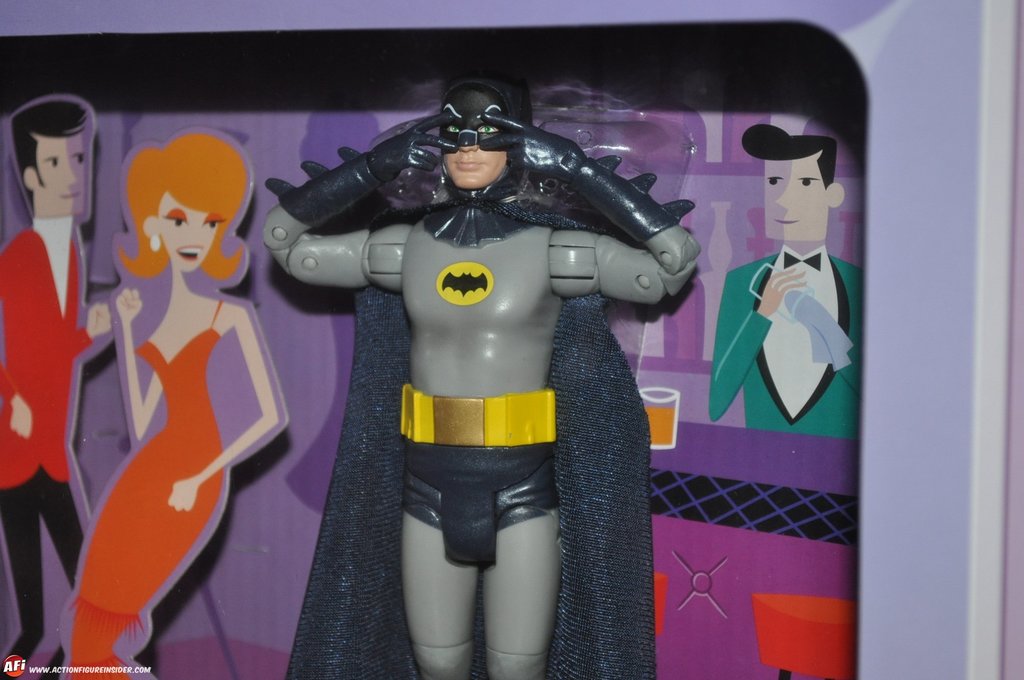 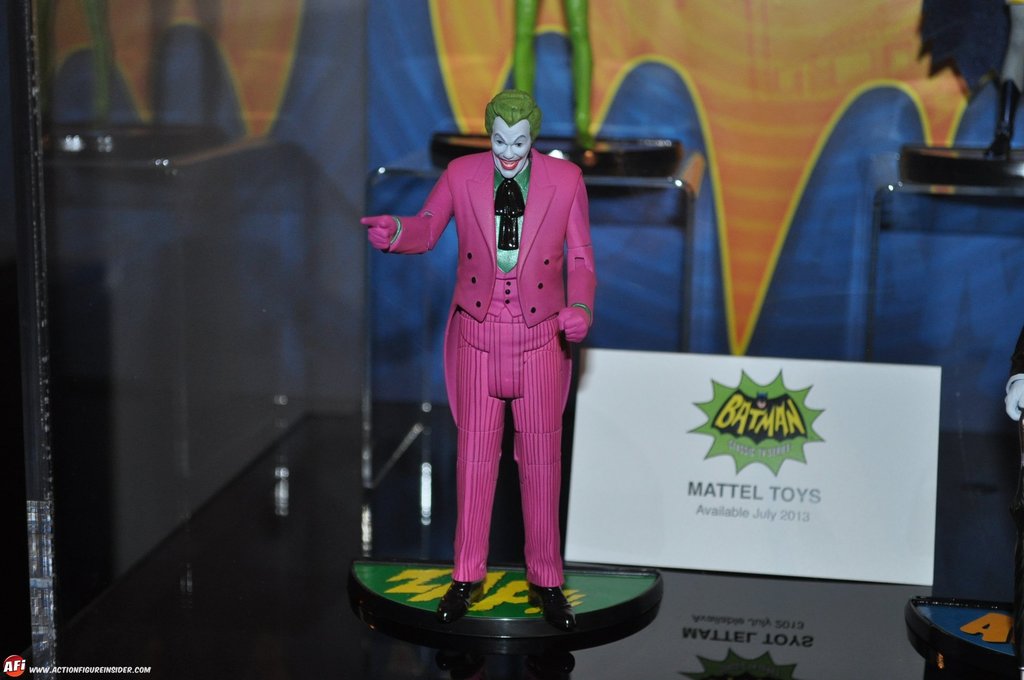 I have a feeling the Catwoman will fly off of the shelves. A Batcave set would be nice, at the time I thought it the coolest place on tv.

Steve W replied to Steve W's discussion A Cover a Day
"On a much happier note, I'm really pleased to hear your positive reactions to the proposal to…"
7 minutes ago

Steve W replied to Steve W's discussion A Cover a Day
"Devastated to hear the news of the sudden untimely death of the wonderful Olivia Newton-John, aged…"
31 minutes ago

Jeff of Earth-J replied to Jeff of Earth-J's discussion Swamp Thing
"ISSUE #118: This issue begins with Tefé in The Dreaming. She is 20 months old at this…"
1 hour ago

Richard Willis replied to Steve W's discussion A Cover a Day
"This character is called Gravedigger. He should have a shovel to dig his own grave. Nobody who…"
1 hour ago

Jeff of Earth-J replied to Jeff of Earth-J's discussion Swamp Thing
"ISSUE #117: Swamp thing, Abby, Tefé, Chester and a couple of characters from the annual…"
2 hours ago

JD DeLuzio replied to Steve W's discussion A Cover a Day
"1. I like classrooms, even if (I suspect) it will mean a lot of Archie covers. 2. So about those…"
4 hours ago

JD DeLuzio replied to The Baron's discussion Movies I Have Seen Lately
"We watched that as well on Prime. I think it works but, as you say, mostly because Dinklage and…"
4 hours ago

Philip Portelli replied to Steve W's discussion A Cover a Day
"Joe Kubert for September is ok by me!  But only if someone explains this cover to me! "
4 hours ago