The Adventures of Rose Tyler

Rose Tyler was the Doctor’s first companion of the new era.

Here are some highlights of her character arc.

FATHER’S DAY: The Ninth Doctor takes Rose to the day her father died.

RISE OF THE CYBERMEN / THE AGE OF STEEL: The Tenth Doctor and Rose meet other versions of her parents in an alternate dimension.

2.1 - INFAMY OF THE ZAROS: Earth is being invaded by an alien race. It ends up being the premise for an alien reality show, but the casualties are real.

2.2 – THE SWORD OF THE CHEVALIER: An historical about the gender fluid spy, the Chevalier d’Eon.

TURN LEFT / THE STOLEN EARTH / JOURNEY’S END: After first arriving on Donna Noble’s alternate reality Earth, Rose finally makes it back to her home dimension where she helps the Doctor defeat Davros. A human/Time Lord hybrid of the Doctor, created by an instantaneous biological metacrisis during a unique aborted regeneration, returns with Rose to Pete’s World.

“Rose Tyler’s world is ending. As she begins a desperate mission to find the one person who can make a difference, Rose discovers that it’s not only her universe at stake. Across alternate dimensions, parallel timelines – where divergences may be tiny or cataclysmic – every Earth is under threat. Time is running out, but Rose won’t stop searching until she finds the Doctor...”

“As his parallel universe darkens, Pete Tyler has found a chance of survival. Punch a hole through dimensions and someone can jump through - and maybe find a way to the Doctor’s universe.
On her very first trip, Rose visits an Earth that’s about to get colder. As a long night begins, Rose meets different versions of her parents. And one man who could help her search. His name is Clive…”

COMMENTARY: The Dimension Cannon tells the stories leading up to Rose Tyler’s return to the Doctor’s reality at the end of series four. Her first attempt lands her in a reality which was not invaded by aliens the three Christmases prior and which has never heard of the Doctor. She does track down her alternate reality “parents,” though, who broke up before they were married. Pete is a widow and Jackie has had two failed marriages. Rose brings them together, but the results are bittersweet because nothing can save their Earth once the Sun has been snuffed out. Rose does manage to save one person from this reality, however, a young man named Clive.

HA-HA-HA, Even YOU cannot challenge my Doctor Who Nerd might! ;)

I probably would have figured it out for myself if I would have taken a closer look at the cover art. 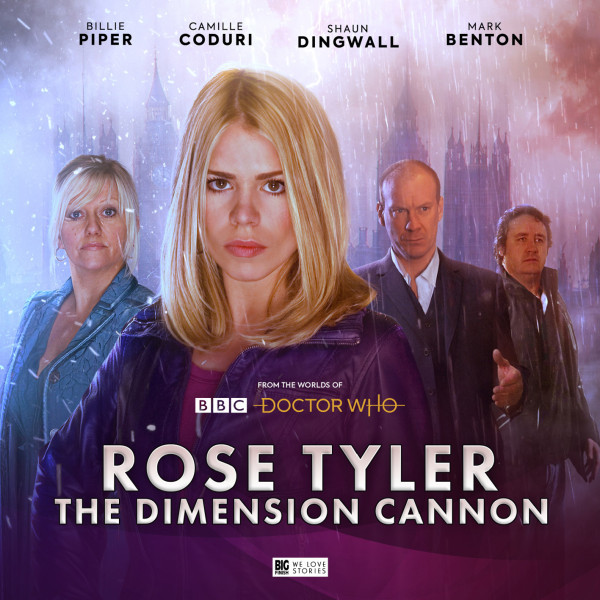 “Making another leap with a new companion, Rose finds a world suffering environmental change. The rain won’t stop, and the government could be hiding the scale of the impending disaster. While Rose connects with another version of Pete and a strangely compelling young man, Clive meets someone special of his own. In this world, there was no Clive for Caroline to meet, but love can cross dimensions.”

COMMENTARY: At first blush, one might think this story is a cautionary tale about global warming, but it’s not really. In point of fact, this reality identified the rise of technology following WWII as the chief cause of global warming, and all countries on Earth (except for New Argentina and East Korea) banned all technology in the 1980s. This is a world with land lines but no cell phones; libraries but no internet; no cars, no planes.

Rose tracks down this reality’s version of Pete. He married Jackie but is now a widow. They had one child but it was a boy. (Oddly, Rose thinks of him as a male version of herself rather than a “brother”, so when she fancies him at first it is more narcissistic than incestuous.) Clive tracks down this reality’s version of his father, who never met his “mother”, never married and never had kids. He then meets Caroline, his “wife” from Rose’s original reality, and they fall in love.

This reality’s “global warmings” is caused by something from space, something which has caused the equatorial region to shift to the UK. Also, the near constant rainfall has the opposite effect of fertilization: it is causing the ground to become barren. The governments of the world realize this fact, but are keeping it from the general populace to avoid panic. With no Doctor to intervene, what are Rose and Clive to do?

“Pete decides it’s time he accompanied Rose on one of her dimension jumps. But he couldn’t have picked a worse time. They arrive in a world where technology took an extraordinary path, and where the recently deceased Pete Tyler had a very different kind of success. As machines start to break down, Pete meets his widow, and he and Rose must confront truths about their ‘family’. But they may not escape this Earth alive.”

COMMENTARY: Pete accompanies Rose on this trip while Clive stays behind and operates the dimension cannon. Every electronic device in this reality (cars, home security systems, kitchens, etc.) comes with its own AI. We come to find out that this dimension’s Pete Tyler invented a means of downloading a human consciousness into these devices. Family members who cannot say goodbye to their departed loved ones have this done, often against the wishes of the deceased, and now the AI are rebelling.

THE LAST PARTY ON EARTH:

“Rose and Jackie visit a home very close to the one they left behind. But some old friends are missing, and some are unexpectedly present… Rose meets two young men she knows should be together - it can sometimes take the end of the world to see what’s right in front of you. Meanwhile, the Powell Estate faces Armageddon in the only way it can – by throwing a party.”

COMMENTARY: Jackie insists on accompanying Rose on an attempt to contact the Doctor, even though she’s utterly unqualified, and they let her… pretty much because she’s Jackie. Jackie and Rose arrive on another Earth which, not only has never heard of the Doctor, but also has no Rose, no Jackie, no Pete. A giant asteroid is about to smash into Earth, killing all. Although firmly set in the Doctor Who EU, “The Last Party on Earth” is really about how people, any group of people, deal with impending doom.

Russell Davies had an idea for a “Rose Tyler: Earth Defense” television special which he never got around to producing. “The Dimension Cannon” grew from that. The theme of “family” runs throughout this set, how Rose and Jackie and Pete are tied together by familial bonds, even those from alternate realities.