I know there's at least one other fan of anime on this board, and perhaps more, so I thought I'd do a review of some of the anime I've watched. I'm hoping others will do the same.

Plot: 6 girls niter high school as freshman and graduate as seniors. This anime follows their day to day lives.

What's good: More than anything, Azumanga Daioh is funny. There are a number of unique characters and their interactions are hilarious without ever being forced or too ridiculous.

The characters are the strength of this anime, from the outwardly cool but really shy and sensitive Sakaki, the seemingly spacey "Osaka", the child prodigy Chiyo and the others, including their teachers.

The interactions are funny, surrounding mundane activities like studying, athletic competitions, cultural festivals and the like.  The humor comes primarily from the characters themselves and how they react to the stimuli in their lives.

One thing that also helps is that their teachers are not perfect. One of them is a mirror image of one of her students, another seems cool and calm but has a bad temper, causing the two of them to bicker like an old married couple--in a good way.

There's another teacher, but I'll get to him later.

Finally, there are some occasional surreal elements but I feel they mostly work, specifically given where they come from.

What doesn't work: There are a handful of problems with this anime as well. For instance, one of their teachers is a pervert. I know it's meant to be funny, but given the tone of the anime, it's more creepy than anything.

Additionally, there are things brought up that are never explored and I was kind of hoping they would be. As an example, one of the female teachers confides tot he other that she's thinking about an arranged marriage, which is something I found fascinating, but was soon ignored.

Oh, and there's no boys in the anime. You occasionally see one in the background, but the only male character of note is the teacher.

A final thing, and it's minor, was that given that this anime covers 3 years of these character's lives and that most of them are in high school, you might think you'd see some physical differences in them between episodes 1 and 26, particularly in the case of Chiyo as she's 10 entering school and 13 leaving. Minor, but I would have liked to have seen that.

Fanservice Level: Low, despite three separate trips to the beach. sure you see some of the girls in bikinis, but it's not really sexualized.

Final Thoughts: Azumanga Daioh is definitely worth watching. It's funny and sweet, and does give a reasonable idea of what life can be like for girls in Japan's high schools.

Azumanga Daioh is a particular favorite of mine.  For me, the main negative is Mr. Kimura, the perverted teacher. He's the one thing that might make me cautious about recommending it to everyone.  He really feels out of place in an otherwise light-hearted comedy.  The scenes where he stalks Kaorin - and causes her obvious emotional distress - are fairly disturbing.  I've encountered these kinds of pedophilic characters in other manga/anime stories and can only conclude that there's some kind of cultural difference here regarding what is considered funny.

I found the parallelism between Yukari and Nyamo and Tomo and Yomi interesting.  Notice, even that Chiyo-chan's two grade school pals Miruchi and Yuka-chan look like younger versions of Yukari and Nyamo. 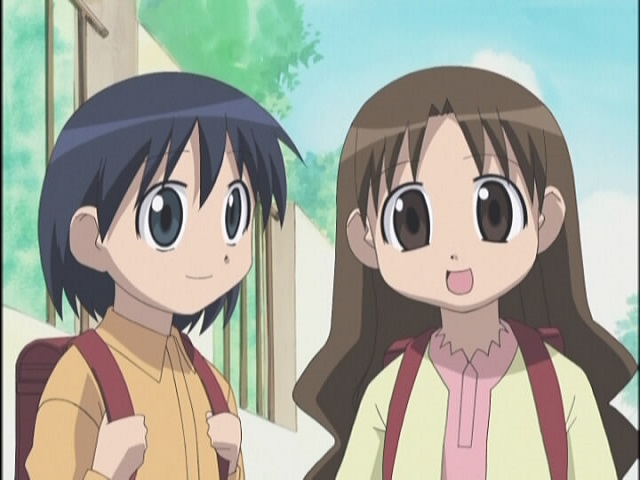 Yeah, Tomo was another character I had issues with, namely because we weren't really shown why anyone would want to spend time with her--same with Yukari. 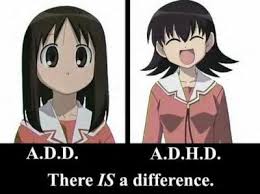 Yeah, the "character that you wonder why anyone puts up with them for five minutes" is a common fixture in anime.

Episodes: 12 half -episodes plus a movie

Plot: Soichi wants to be a soft pop singer, but he can't pay the bills that way. Instead, he's the lead singer for Japan's blackest death metal band.

What's good: The humor in this series largely comes from Soichi's conflicted nature. There are lots of alter-ego shenanigans rivaling some of the most excessive Silver Age secret identity stories.

Additional humor comes from some of the other characters, most notably the band's extremely foul-mouthed manager and the band's legion of fans who will do pretty much anything if they think i9t will help the band and it's members.

What doesn't work: There's a romance that pretty much goes nowhere, which is somewhat annoying. Also, because of cultural differences there are language choices I'm not terribly comfortable with.

Final Thoughts: This is a funny, uproarious sort of comedy/satire. Much of it seems ridiculous, but not necessarily farfetched, other than the secret identity shenanigans I alluded to earlier. There is a lot of foul language, so be aware of that, but I definitely recommend watching it.

I'm sure Tomo had some good qualities, but we're never shown what they are.

Yeah, the "character that you wonder why anyone puts up with them for five minutes" is a common fixture in anime.

Title: Watamote! aka No Matter How I Look at It, It's You Guys' Fault I'm Not Popular!
Episodes: 12 episodes plus an OVA
Category: Comedy???

Plot: Tomoko enters high school. She's always been less than popular, but she thinks that now that she[s in high school, she'll achieve popularity and some friends. However, this doesn't happen and her efforts to achieve her goals tend to end up failing spectacularly.
.
What's good: Tomoko is the centerpiece to this anime, and pretty much everything hangs on her and how people respond to her. She's painfully introverted and extremely socially awkward, iand it reminds me so much of myself at that age it's eerie.

A number of people who don't like this show base their dislike on two things: 1) that Tomoko dosn't experience any character growth and 2) that it becomes painful to watch her fail again and again and again. However, for me, these were strengths, as I feel it's reflective of many people who have similar issues. Also, I like the fact that it's a little unsettling--we all grow up hearing the tropes that it will all get better as we get older, but that's not always the case, and I like that this anime reflected that.

What doesn't work: Some of Tomoko's schemes seem really farfetched in terms of who she is and he knowledge of herself. One wonders why she puts herself in some of these situations.

Final Thoughts: As I stated earlier, this really reminds me of who I was when I was younger--and to some extent who I still am. I very much enjoyed this on that level.

I haven't heard of any of the anime listed so far either, but for what it's worth, Cartoon Network's Adult Swim on Saturday nights has not only recently started another encore of Cowboy Bebop and Outlaw Star, but is also showing a new batch of Lupin The Third too among its anime offerings.

I've found that netflix has a good anime selection.  Haven't had time to really watch anything though.

Combining DVD rentals and streaming, I have begun watching the original Ghost in the Shell. In the ones I've watched so far, the level of detail in the artwork is up the the high standards set in the 1940s before cost-cutting was predominate. Some of it looks like it was influenced by Will Eisner.