We still haven't had a reply for John Bolton. Who wants to post one?

I've never heard of him, but he does seem to have done alot of weird stuff.

Let's have another one, then!

He drew the earlier new back-up strips in Classic X-Men in the 80s, and had before that worked in British comics. Some (although not me as it happens) may have seen his "Father Shandor" instalments in the first three issues of Warrior, which were reprinted from earlier publications with stories based around Hammer movies.

I know Bolton from several Vertigo projects. Here's the cover image from The Furies, one of the two Sandman spin offs he illustrated that were written by Mike Carey: 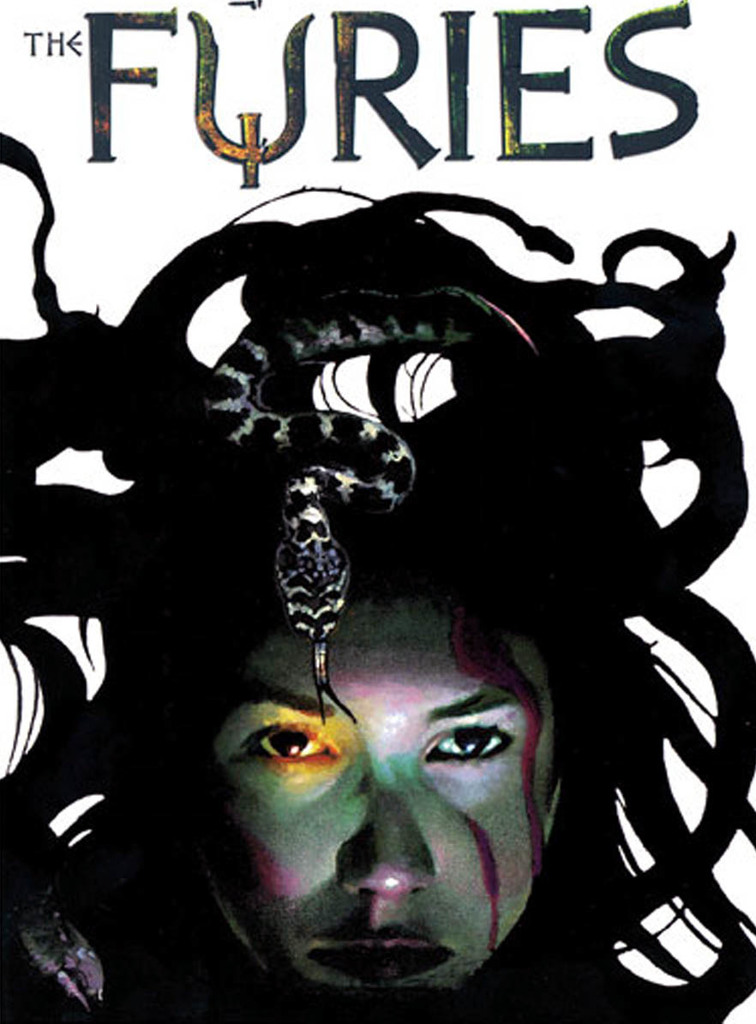 My favorite Joe Staton work is on E-Man and Michael Mauser loved that series. E-Man had a run before that, under a different publisher, and some sporadic runs since then, under other publishers, but I loved that one.

Richard, you get Mike Allred.

Ready for another one!

LETS CHANGE THE FORMAT ON THIS ... from now on I give an artist and anyone who wants to can post a favorite image!

The next artist for the spotlight is ... Bob Layton! 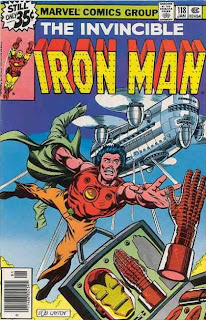 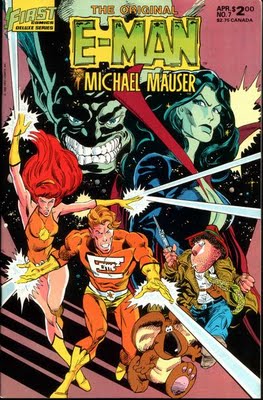 I loved that series. E-Man had a run before that, under a different publisher, and some sporadic runs since then, under other publishers, but I loved that one.

I've seen a few issues of the earlier Charlton series. I liked the First series better because it parodied several of the then-hot comics on the stands, such as Elfquest.  I remember the pitch-perfect spoof it did of the Chris Claremont/John Byrne Uncanny X-Men, right down to misplaced windy, overwrought captions that told you what you saw in the previous panel.

Plus, I liked Michael Mauser, too. He had a backup solo series in the book, and a three-issue spinoff title, The P.I.s, where he teamed up with Ms. Tree!

This gives me an opportunity to say that the means by which Tony escapes the dilemma on the cover would not work. Spoiler warning. In the comic, Tony is able to dress as Iron Man while he falls. But he and the case with the suit have different terminal velocities and aerodynamic properties, so they would not have fallen at the same speed, so he would not have been able to park the case in the air next to him as he dressed.

The Baron replied to Steve W's discussion A Cover a Day
"Although he was much hetter known as a cartoonist, Dr. Tezuka was an MD as well, so this fits the…"
4 hours ago

Luke Blanchard replied to Peter Wrexham's discussion Celebrity Mastermind - "The History of DC Comics"
"If I might nitpick, answer-to-question-#6 didn't debut until 1941."
4 hours ago

Philip Portelli replied to Wandering Sensei: Moderator Man's discussion What Comic Books Have You Read Today?
"THE DEADLY FOES OF SPIDER-MAN #1-4 (1991): the precursor to The Superior Foes of…"
5 hours ago

Jeff of Earth-J replied to The Baron's discussion Movies I Have Seen Lately
"UFO: TARGET EARTH: "Under the depths of a small lake located near a small towm, lies a strange…"
8 hours ago

Jeff of Earth-J replied to Jeff of Earth-J's discussion Tales to Astonish
"...but perhaps in the Marvel Universe...?"
9 hours ago

Richard Willis replied to Jeff of Earth-J's discussion Tales to Astonish
"Jeff of Earth-J said: The three former pawns are picked up by soldiers in a jeep bearing NASA…"
9 hours ago

Captain Comics replied to Peter Wrexham's discussion Celebrity Mastermind - "The History of DC Comics"
"I couldn't answer #5. I confess I couldn't remember #1 immediately, but it came to me as…"
9 hours ago

Steve W replied to Peter Wrexham's discussion Celebrity Mastermind - "The History of DC Comics"
"Peter, Thanks for typing all these questions out in full.  I watched this show when it went…"
11 hours ago