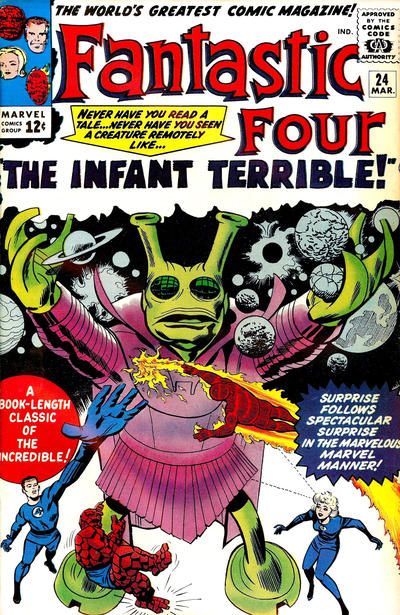 Richard Willis replied to Steve W's discussion A Cover a Day
"It turns out that I have three covers left, not two. So I'm posting today after all."
21 minutes ago

Richard Willis replied to Steve W's discussion A Cover a Day
"The short red hair is a tribute to Mia Farrow in Rosemary's Baby."
23 minutes ago

Fred W. Hill replied to Jeff of Earth-J's discussion The Greatest Comic Book of All Time
"I can't really say what I'd regard at the greatest comic ever, but just going from my…"
2 hours ago

Jeff of Earth-J replied to Jeff of Earth-J's discussion The Pre-Defenders
""Funny that the editor & writer of that Tales to Astonish story, and also happened to have…"
2 hours ago

doc photo replied to Jeff of Earth-J's discussion Tales to Astonish
"The stories covered above make up my favorite Hulk run of all especially the Ditko material. We…"
2 hours ago

Lee Houston, Junior replied to Steve W's discussion A Cover a Day
"Like I said in my previous post: ALWAYS read the fine print! (Image courtesy of the Grand Comics…"
2 hours ago

Fred W. Hill replied to Jeff of Earth-J's discussion The Pre-Defenders
"Funny that the editor & writer of that Tales to Astonish story, and also happened to have been…"
3 hours ago

Jeff of Earth-J replied to Jeff of Earth-J's discussion Tales to Astonish
"As I have mentioned, my first two "Hulk" comics were Incredible Hulk #167…"
3 hours ago

Captain Comics replied to Captain Comics's discussion Bond #4: 'Diamonds Are Forever'
"I liked (Never Say Never Again), but consider it separate from the other Connery Bonds. It's a…"
3 hours ago