The Best of Firefly & Serenity It’s hard to believe that it’s been 12 years since Joss Whedon’s Firefly first hit the airwaves.  I was there at the beginning, watching the first episode on a Friday night.  I wasn’t previously a Whedon fan.  I didn’t get into Buffy or Angel until much later.  But I was intrigued by ads for a show that looked like a western science-fiction mash-up.  I didn’t fall in love with Firefly instantly, either.  I thought that John Doe had a better premiere (they debuted the same night).  Yet John Doe quickly became repetitive, while Firefly got better and better every week.  I stuck with the show even through a move two time zones away to another country for a new job.  I was one of the faithful few, watching from the beginning, and disappointed to learn that my new favorite show would be cancelled just before Christmas.

It’s hard to believe that I haven’t written a “Best of Firefly” article before now.  I’ve often taken a break from writing about comics to write about my favorite science fiction or geek culture TV shows (such as Farscape, Babylon 5, Chuck and Lost) yet I had never tackled the best one.  I suppose I was concerned that a Firefly article would be pointless as my list of best episodes could be summed up as “every single one.”  However, enough time has now elapsed (did I mention that it’s been 12 years?) and enough exhaust has passed through the wake, that I think I’m finally ready to tackle a “Best of Firefly” column.  Be prepared for the best in television, the best in movies (um, movie) and the best in comics. 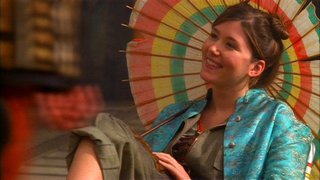 Serenity, Part 1 & 2: The original pilot was supposed to serve as a double-length debut, but the network had other ideas so it became a double-length finale instead.  In either case, it’s one of the best episodes in the entire short run.  It’s a great introduction, fleshing out background and motivation for many of the characters, while also entertaining us with thrilling pursuit and classic misdirection.  The episode weaves two main plots together.  In one, Captain Malcolm Reynolds is trying to sell cargo that he and his crew illegally salvaged.  In the other, Mal takes three new passengers on board, each of whom are hiding their own secrets.  Serenity soon finds herself pursued by the all-powerful Alliance, even as Mal is double-crossed in an attempt to sell his illegal cargo.  It’s funny, it’s exciting, it’s intriguing.  We want to learn more about these characters, about River’s story and Shepherd Book’s past.  And we admire Mal for his ruthless focus and his sense of honor.  Plus, Serenity features one of the three great guest stars in the series: Mark Sheppard as Badger, the small-time hood who hired Mal for the salvage job. Our Mrs. Reynolds: This is the episode that won me over completely.  It’s absolutely hilarious.  Mal and the gang run off some rustlers for a local village and receive a few gifts in return.  Jayne gets a rain stick.  Mal, unexpectedly, gets a bride.  This episode does an excellent job of showing Mal as the noble rogue.  He doesn’t want a wife, but he also wants to do right by the young woman, Saffron.  However, the best is yet to come.  In a stunning twist (sorry for the spoiler), Saffron is a grifter, not a virginal bride, and she incapacitates the ship so that it can be salvaged by a chop shop.  Christina Hendricks is stupendous as Saffron, and the regular cast play together uproariously well. 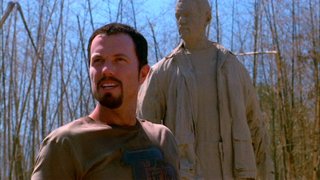 Jaynestown: This is another comedy classic.  Jayne Cobb is the one thief who isn’t hiding a heart of gold, but when the crew of Serenity visits a moon known for producing ceramic mud they discover that Jayne is a local folk hero.  The locals think he’s Robin Hood, but he’s still the crass jerk we know and love.  Wash gets most of the best one-liners, but even Simon gets to be funny in this episode.  Jaynestown wonderfully upends our expectations, and it even has a poignant ending as a young mudder sacrifices his life to save Jayne in a move that “makes no sense.”  The folk song “The Hero of Canton” is hilariously wonderful as well. 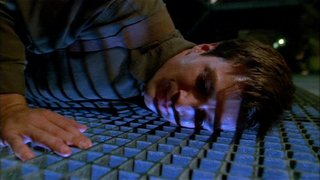 Out of Gas: Firefly won me over with its comedy, but the dramatic episodes elevated it into another stratosphere.  Out of Gas is the first of the three great dramas.  An explosion in the engine room knocks Serenity out of commission.  She’s floating dead in the water, so to speak, and the crew is quickly running out of exhaustion.  Writer Tim Minear uses a creative narrative structure, telling the story in three different time periods.  In the present, a weak and bleeding Mal struggles to walk through the ship with an engine part in his hand.  In the main story told through flashbacks, Mal and the crew deal with the repercussions of the explosion.  And in a third story using even more flashbacks, Mal recalls the incidents in which he bought Serenity and hired the various members of the crew.  It’s wonderfully poignant and informative at the same time. 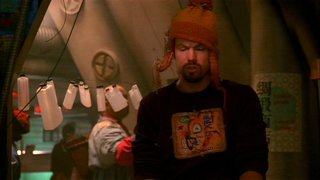 The Message: This is one of three episodes that didn’t air during the original Fox run but were instead released for the DVD set and SyFy channel revival.  Firefly weaved back and forth between comedy and drama better than almost any other show.  That flexibility allowed it to play with audience expectations, as in The Message.  The episode opens with some fun comedy- a romantic moment between Simon and Kaylee gone awry and Jayne getting a knit hat in the mail from his mother.  But it quickly turns serious when Mal and Zoe receive the corpse of an old army buddy named Tracy.  Whedon and Minear keep playing with our expectations- Tracy isn’t dead and he’s more a user than a noble thief.  The same surprises that delight the viewer end up confounding Tracy, leading to a bitter end. 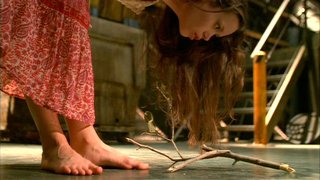 Objects in Space: I mentioned that there were three great guest stars during the original series.  Objects in Space introduces the third: bounty hunter Jubal Early, played by Richard Brooks of Law & Order fame.  Enemies have been tracking Simon and River Tam from the beginning and one finally catches up to them.  Jubal Early is an odd duck.  He’s a philosophical bounty hunter, inclined to reflect on the meaning of life while kicking someone in the head.  I particularly appreciate it when he misunderstands Simon’s question “Are you Alliance?” as “Are you a lion?” and pontificates on his own nature.  The episode also does a great job of focusing on River, showing her unique abilities as she evades Jubal Early by infiltrating his own ship and confirming the crew’s fondness for her, in spite of her mental peculiarities. Serenity: Those Left Behind: Joss Whedon crafted this excellent mini-series for Dark Horse Comics to serve as a bridge from the television show to the upcoming movie.  In many ways, it’s for hardcore fans- the ones who made the movie possible- yet it’s still accessible for those just joining the bandwagon.  The heart of the story is the return of Dobson, the alliance agent who tracked Simon in the pilot and was shot in the head by Mal.  Dobson survived but he has a cybernetic eye and a huge grudge. Blue Sun agents- the guys with the blue gloves- hire Dobson to take down Serenity for them and we get some great action scenes.  Joss Whedon and series writer Brett Matthews pen the usual blend of witty patter that we expect from Firefly.  We’re also treated to an interesting epilogue as the Blue Sun agents are removed from the case after yet another failure and an unnamed operative is hired instead.  The Will Conrad art fits well.  He draws recognizable faces without being photo-realistic.  But the covers, drawn by nine different artists, are absolutely stunning.  My favorites are Jayne by Bryan Hitch, Kaylee by Jo Chen and River by Joshua Middleton.

Serenity (The Movie): I know a few Firefly fans who don’t like the Serenity movie.  It was a little too dark for them.  And they’re disappointed that so many favorite characters were killed off.  I get their point, but I don’t agree with it.  The television show employed a wide range of tones from light-hearted to melancholy and, while the movie is on the darker end of that range, it isn’t out of place.  Joss certainly upped the stakes for the movie.  He put the characters in constant danger, keeping everyone on the edge of their seats.  He also answered a lot of questions about River, about the Reavers, about almost everything.  It’s not often that a writer can resolve mysteries in the midst of action but Joss pulls it off.  I absolutely love the opening as Joss uses multiple flashbacks to draw us into the story.  I love the big screen feel, especially as the Alliance clash with the Reavers in the atmosphere above Mr. Universe’s moon.  And I love the new characters.  Mr. Universe is a fun addition with his joie de vivre and the Operative, the new nameless foe, is one of cinema’s classic villains.  He’s smart, he’s ruthless and he believes completely in his mission.  To defeat him, Mal has to be just as smart and just as ruthless.  It’s an amazing film, even if it didn’t become the box office blockbuster die-hard fans wanted it to be. 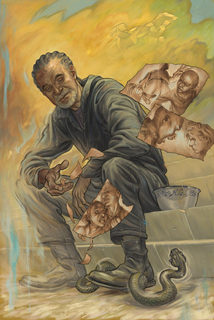 Serenity: The Shepherd’s Tale: One set of questions wasn’t answered by the movie: those about Shepherd Book’s past.  The movie even hints at them with Mal mentioning that Book would have to tell him his secrets one day (Book smartly replies, “No, I don’t”).  But while Book may keep a secret, Joss doesn’t.  Zack Whedon, working off of Joss’s notes, shares the complete history of Shepherd Book.  Zack uses a fun story device, telling Book’s story in reverse so that we start with a scene that occurs during the movie, before moving backward in time.  We see Book’s inner conflict during his time on Serenity.  We see his reasons for leaving the Abbey and for joining it.  And we learn about Book’s past as both an Alliance officer and an Independence rebel.  It’s everything fans always wanted to know and it’s a told in a way that is captivating, surprising and heartfelt.  As a bonus, Chris Samnee provides beautifully unostentatious art, which seems perfect for a book about Shepherd Book. 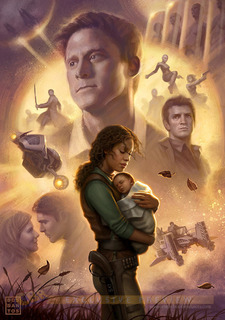 Serenity: Leaves on the Wind: More than any other mini-series, Leaves on the Wind feels like an episode of the television show.  Maybe that’s because they finally expanded to six issues and Zack Whedon has room to include the character moments and plot twists we had come to expect.  And the twists are excellent.  Jayne has left Mal’s crew and is working for a rival thief.  Jubal Early is back and intent on capturing River.  And, aware that he needs help, Mal turns to the only person he knows who is more persistent than Early: The Operative.  It’s completely unexpected and it leads to an enjoyable confrontation between two of Serenity’s biggest foes.  Georges Jeanty, who previously worked on Gambit and Buffy, is the artist this time around.  Truthfully, I liked him better on Buffy as he’s a bit cartoony compared to previous Serenity artists like Samnee.  Then again, that adds to the light-hearted tone which is a welcome respite after more serious stories like the movie and The Shepherd’s Tale.

Firefly and all related images and content  are © Fox Broadcasting Company. Screenshots are courtesy of Can't Take the Sky, Still-Flying.net.