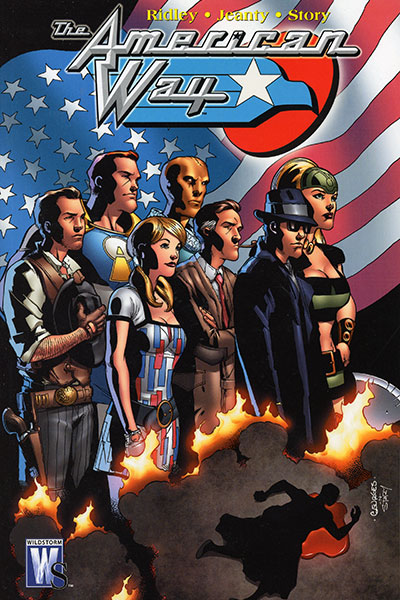 Back in 2007, I picked up a copy of John Ridley’s “The American Way.” A TPB which collected an 8 issue Wildstorm mini-series. I’m not sure what prompted me to pick it up. Maybe a positive review or Ridley’s involvement in the film “Three Kings.” In any case, I remember enjoying the story and thinking I would like to read it again at some point. Seven years later, I had almost no memory of “The American Way” except that it dealt with issues of race and that I had planned to come back to it at some point. That being the case, I thought it would be a good candidate for the Bi-weekly TPB project. So, my plan is to post a series of commentary on an issue-by-issue basis. All comments and opinions are welcome.  I like to think I can make posts to this thread pretty regularly but I'm not sure exactly what my schedule will allow so if anyone has read this and wants to jump ahead, please feel free.

The first issue does a pretty good job of providing the setup for this series.  We learn that the story takes place in the early 1960s amid the Civil Rights movement and JFK’s presidency.  Ridley is not trying to reinvent the wheel here. He is mostly combining elements of stories past. But he is choosing his sources well. We get Marvels type narration and superhero deconstructionism via Watchmen/Rising Stars/Supreme Power.  And there are the usual analogue heroes that correspond to the various archetypes.  There’s Pharos/Superman/Captain Marvel, Freya/Wonder Woman, The Wanderer/Martian Manhunter, Old Glory/Captain America, The Captain/Uncle Sam, X-51/The Flash, etc… You get the idea.  The twist here is that although the heroes of the Civil Defense Corps do have powers, they are basically government-sponsored tools of propaganda, created to make Americans feel safe during an era of Cold War paranoia

Ridley seems to have a good feel for the political and social climate of the early 60s and he weaves the concept of the CDC into that climate nicely.  The artist, Georges Jeanty, doesn’t seem to have the same affinity for the times.  His art is fairly appealing in the glossy sort of post-Image style that was popular at the time but I don’t feel like he did enough to make me believe this story was taking place back in the early 60s.  There aren't enough background details (architecture, vehicles, clothing etc...) to really sell the time period effectively. I would contrast this with Paul Smith's work on The Golden Age which really captured the feel of the WWII era nicely.

By the end of the first issue, we see that the US government is presented with a dilemma as the Soviets seem to be winning the space race,  the Bay of Pigs has just concluded, and then  Old Glory drops dead of a heart attack during a staged battle with a "commie" super-villain.  The government needs to replace their symbol quickly in order to keep the propaganda machine rolling.  This is where our narrator, a Don Draper type ad man, comes in. He has recently been recruited to assist the government's Federal Disaster Assistance Administration in winning the PR war is now confronted with his first crisis.

Looks interesting; I would have joined in if there was a library copy available. BTW, I fixed a typo: "Old Glory" was "Old Gory."  I hope that wasn't a Freudian slip!

Looks interesting; I would have joined in if there was a library copy available. BTW, I fixed a typo: "Old Glory" was "Old Gory."  I hope that wasn't a Freudian slip! 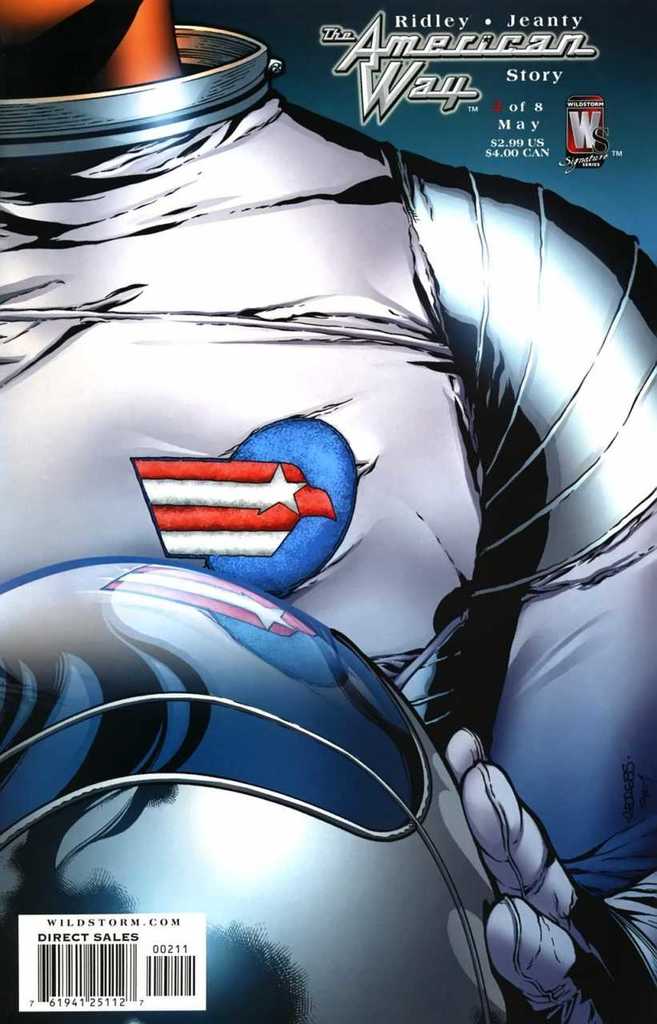 This chapter outlines the genesis of Old Glory’s replacement, The New American.  Ridley stated in an NPR interview that one of the basic ideas for The American Way began to take form when he learned of Vice President Lyndon Johnson’s desire to include an African American in the Mercury Space Program.  Apparently Johnson’s thought was that this would somehow help to alleviate racial tensions in America.  This explains why the costume created for the New American is basically a modified astronaut suit.  The suit serves another purpose in that it conceals the identity/race of the New American.  The idea being that the government would stage some events designed for the New American to win the public’s trust and acceptance.  Once the New American had attained a level of popularity, his ethnicity could then be revealed to the public.

The idea of the first black superhero being created by the government isn’t wholly original.  Marvel’s The Truth: Red, White and Black had already explored similar territory in a Word War II setting. But Ridley seems to acknowledge this by making reference to the Tuskegee experiments on the first page of this issue.

So as the government begins gene therapy on a hand-picked subject to create the New American, we are also made aware of a divide between the Civil Defense Corps’ northern and southern factions.  The northern heroes, including characters such as the East Coast Intellectual and Amber Waves, are shown to be generally more liberal and left leaning while the southern heroes, such as Mr. Lucky (Gambit meets Clark Gable) and Southern Cross (The Torch joins the KKK), generally have more conservative attitudes and appear to include some racists among their ranks.  Ridley is careful not to make things too clear cut and shows us that there are heroes on both sides who have mixed feelings but the clash between northern and southern values will turn out to be a source of constant friction among the heroes just as it was source of friction in the US during the Civil Rights era. 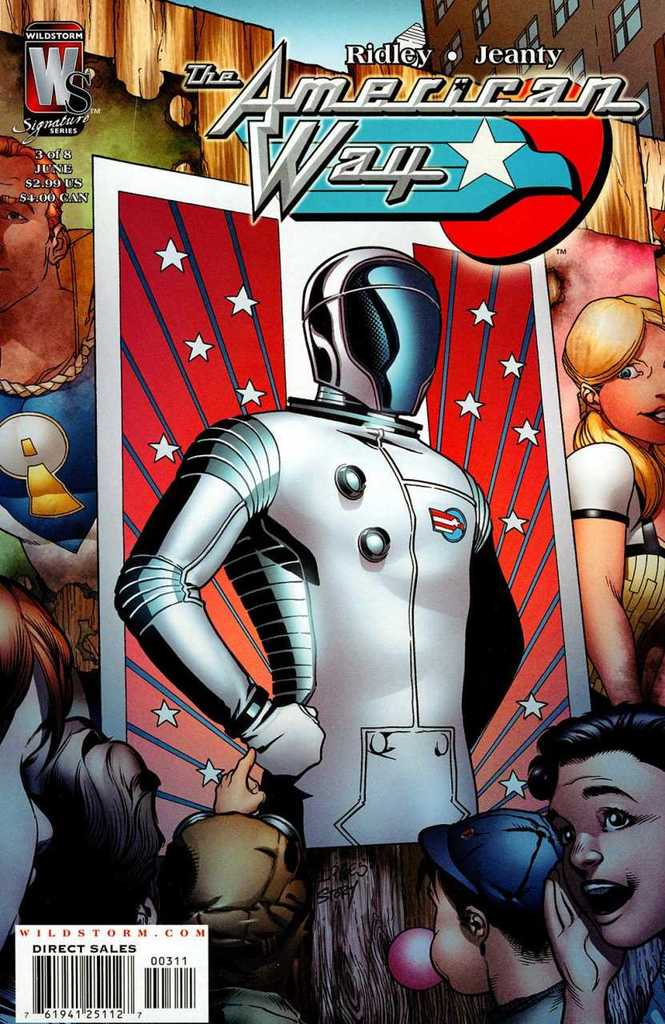 Book 3: Let the Word Go Forth

The title of this chapter comes from JFK’s inaugural address in 1961. The larger context is:

“Let the word go forth from this time and place, to friend and foe alike, that the torch has been passed to a new generation of Americans--born in this century, tempered by war, disciplined by a hard and bitter peace, proud of our ancient heritage--and unwilling to witness or permit the slow undoing of those human rights to which this nation has always been committed, and to which we are committed today at home and around the world.”

Kennedy’s commitment to human rights is the basis on which the CDC has been built but this was clearly an era in which the civil rights movement was still in a very fragile state.  In this chapter, Ridley shows us this same fragility within the CDC itself.  This is a group with an explosive mix of personalities and beliefs being held together by a government agency whose purpose is to deceive the public.   So the question is, "Does the government have the right to deceive the public when it's for their own good?" And who gets to decide if it is for their own good?  It's a question that is still very relevant today as we continue to see information distorted and manipulated by various entities..

As one might expect, things begin to unravel a bit in this issue.  Our ad-man/narrator is beginning to question some of the methods being used by his employers to preserve the illusion. And we learn that a real villain known as Hellbent, who seems to be a sort of pre-Manson psychopath, has inspired a bit of a following among the criminal element.  Additionally, the New American has been put in front of the public to positive reviews but his race has yet to be revealed. Then the Wanderer, without explanation, suddenly goes off his meds and kills his own family.  The CDC is called in to take him down and in the ensuing battle the New American’s helmet is broken and his identity is revealed.  This shocking revelation will turn out to have major implications going forward. Book 4: The Prospects of Mankind

The way I perceive it, the 1960s was a different time. Something like the “prospects of mankind” was actually a major topic of discussion and concern. Coming out of a past marked by two World Wars and all kinds of political and social turmoil, there seemed to be a concern with larger issues and a fear that the future might be in doubt.  Maybe those concerns still exist today, but to me they seemed to be more prominent in the civil rights era.

That tension and fear of what the future might hold is the same tension that drives the struggle within the Civil Defense Corps. The “heroes” of the CDC are really just people with a variety of attitudes and motivations: some of them reasonable, some of them not so reasonable.  And they are struggling to find some sort of common ground that will allow them to exist as a team.  But, as a team, they don’t seem ready for the inclusion of a minority among their ranks.  The premature revelation that the New American is a “negro” is more than enough to upset their uneasy alliance.  On the outside of this is the psychotic villain, Hellbent, who represents a more chaotic and unpredictable element that is always a threat to any kind of social progress or convergence.

So at the halfway point in this story we see that the identity of the New American has prompted an internal civil war within the CDC.  The southern branch, influenced by their more extreme members, breaks off and heads home.

The government is afraid that a black superhero is going to cause a public panic and even the Cuban Missile Crisis isn’t enough of a distraction to satisfy them because they are not in control of it. So they arrange for Hellbent to create an even bigger sideshow to divert attention away from the CDC crisis. Unfortunately, Hellbent isn’t really under their control either.   This leads to a confrontation in which Freya is killed and two other CDC members are injured.  Meanwhile the New American has been forced to lay low and is none too happy about it.