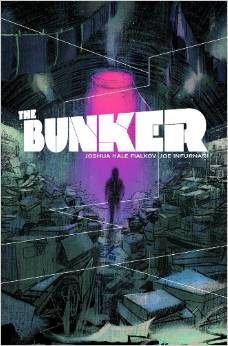 This series started out digitally; the double-sized debut print issue collected five digital issues, newly colored. The story opens with five college friends (Grady, Heidi, Natasha, Daniel, and Billy) who are about to graduate, heading out into the woods to bury a time capsule. When they start digging they are surprised to uncover a metal bunker. Inside there are letters addressed to each of them, purportedly from their future selves. Hard as that is to swallow, the letters claim that the group are going to be responsible for the destruction of the world. They also reveal some uncomfortable secrets about the group in the present. So they have a lot to deal with: can they trust each other; should they believe the predictions; and if they do believe, what can they do to change the outcome?

It's a classic time travel theme (a bit like the Terminator films, minus the robotic apocalypse). The first issue is really packed, as it introduces all of the characters and the group dynamics, plus it includes numerous flash forwards to the future, both before and after the apocalypse. So the future reality is well established from the start. Post-apocalyptic dates are labelled AME, for "After Mass Extinction." No fooling around, barring some future cheat like a dream or virtual reality.

The storytelling pace slows down to normal after that. But the second issue immediately introduces additional wrinkles. The friends are out in the world, and they start getting instructions from the future about actions they need to take, in the form of things like tomorrow's newspaper. But will these actions create a new future, or just guarantee the one they were warned about?

As the story progresses Fialkov also includes childhood flashbacks, filling in the history that shaped these characters. And at the end of the fourth and final issue in the collection, one of them seems to be about to meet his future self: a direct bit of time travel that was only implied in the creation of the bunker. It's a story with enough possibilities to run for many more issues.