I was familiar with earlier appearances of Captain Britain in his original costume (from Marvel Team-Up #65-66 among others) as well as more recent appearances (such as New Mutants Annual #2, X-Men Annual #11 and Captain America #305-306), but I was interested in the significance of his sartorial shift. The first story in X-Men Archives: Captain Britain #1 cleared that up, but the stories began in medias res (or so I had perceived at the time), and I wanted to know what happened before that!

Flash forward nearly 15 years to 2009 and the recently concluded Marvelman/Miracleman discussion which got me interested in Captain Britain all over again! Marvel recently released a Captain Britain Omnibus, and judging by the costume the title character was wearing on the cover, I was about to have my curiosity slaked at last! So I culled some duplicated comic strip collections from my shelves and traded them in for the hefty volume, only to discover it contained only the Thorpe/Moore/Delano and Davis stories I already owned! But I also found out that all of the original stories I was interested have been collected in British editions.

So starting soon I will begin to cover Captain Britain’s entire UK run! 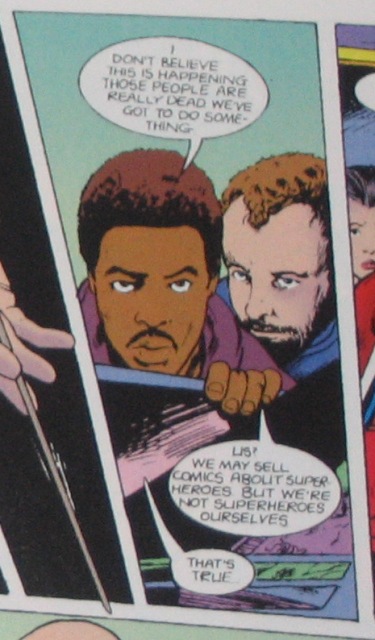 Permalink Reply by Martin Gray on October 13, 2009 at 6:36am
Thanks. Def not Moore and Davis then - the dialogue hints that we're talking comic shop owners rather than creators. I've a vague memory that in the olden days British creators would occasionally cameo London comic shop guys - maybe from Comics Showcase, or Dark They Were and Golden-Eyed.

Permalink Reply by the_original_b_dog on October 13, 2009 at 8:17am
The store is Forbidden Planet, as shown on an earlier page.

Permalink Reply by Martin Gray on October 13, 2009 at 8:21am
There you go then, it's whoever worked there then!

Permalink Reply by Figserello on October 13, 2009 at 8:45am
I was going to say Forbidden Planet, as it was very famous and I vaguely remember it being named in the story, but then I thought nah - I'm just misremembering things.

One of the reasons I thought 'nah!' was that these CB stories were written in 1981(?) and its good going for a comicshop to stay open from then to 1990. Especially when you consider how specialist a comicshop was then.

I frequented it during my working summer in London in 1990. Its where my copies of Miracleman were bought. I wonder was it the same shop on New Oxford Street back in 1981? Anyhow, it has moved since then to Shaftsbury Avenue, up the road from Piccadilly Circus.

When I shopped there in 1990, the staff did not look like the two guys in the scan. The staff were all miserable Punks and Goths in bondage gear with multiple peircings.

That moment where Brian and Betsy meet was quite affecting. In moments like that the characters start to become real people. Of course, they couldn't recognise each other, not because of the time that had passed, but because they were now being drawn by a different artist!

Permalink Reply by Martin Gray on October 13, 2009 at 8:54am
The new Oxford Street shop opened in the 1990s but I think in 1990 you'd have been at the earlier shop at, er, I forget too. Is someone targeting us with the Mists of Napalm?

Has there ever been a Brit named Betsy?


Well, there was Betsy Ross who was a British citizen (until the Ameican Revolution, anyway).

Regarding the cameo, it might well be employees or owners of Forbidden Planet, but "Ron Wilson" looks like his caracature from a back-up feature during his tenure on The Thing and the other guy strongly resembles Chris Claremont. OTOH, Claremont and Wilson never collaborated on Captain Britain, nor any other feature I am aware of.

On February 3, 2006 Detective 445 said: This installment consists mostly of the battle between CB and Slaymaster. There doesn't seem to be much more to it than that, which is strange for a Moore story. The Captain wins the fight with the help of the pre-cogs and we learn that Slaymaster was working for Arcade (who had battled Captain Britain in a Marvel Team-Up story). We also learn that Arcade is working for The Vixen who has taken control of STRIKE.

Moore's goal with the last couple chapters seems to be mainly to introduce Betsy Braddock and the pre-cogs into the story and to provide them with a motivation to join Captain Britain at his mansion. Also, we learn that Arcade is a big Sgt Bilko fan.

Now that the groundwork is laid and the characters are in place, Moore is ready to proceed.

As ‘Tec pointed out, Vixen has taken control of STRIKE and hired Arcade who in turn supplied Slaymaster to take out STRIKE’s psi-division (because they posed the greatest threat to uncovering and revealing her plans). In addition to bringing Arcade back into the story, Moore also reintroduces Chief Inspector Dai Thomas.

Permalink Reply by Figserello on October 13, 2009 at 10:11am
This seems to indicate that they moved to New Oxford Street in 1988, from Denmark street.

So my poor old memory is still funktional.

If you're a superhero junkie from the wilds of Donegal, your first big building full of GNs and back issues tends to stick in the memory...

Sadly I haven't been in the one in the CB strip in that case.

It was in Denmark street and there's probably a guitar shop there now, in case anyone wants to do a pilgrimage...

Permalink Reply by Mike Williams on October 14, 2009 at 8:27am
It would be the first home of Forbidden Planet, in Denmark Street - they moved to New Oxford Road in about 1991, and to their current home in Shaftesebury Avenue five years ago.

Did I mention I much prefer Alan Davis's costume redesign to anything before or since - unique!


On February 6, 2006 Detective 445 said: This is the chapter where Moore's story takes off in earnest. A mercenary group from another dimension called the Special Executive has been contracted to obtain Captain Britain's services. Apparently the Special Executive is a Moore creation that had previously appeared in a Dr Who comic. I don't know how this fits into Marvel continuity, if at all.


The Special Executive, led by Wardog, easily subdues everyone in the mansion before engaging the Captain in battle. We then learn that Wardog and his mercenaries have been hired by Saturnyne to gain the Captain's aid. Saturnyne is an inter-dimensional schemer who had previously abandoned Braddock on Jim Jasper's world and caused the death of his friend Jackdaw.


The Captain refuses to give aid at which point Special Executive member Fascination subdues him and the group is transported away from the mansion.

The most recent character to be re-introduced is the most recent character to have been introduced, Opal Luna Saturnyne, in a direct sequel to Dave Thorpe’s storyline. Now that Moore is apparently finished reintroducing characters, he introduces a few of his own: Wardog, Cobweb, Legion, Zeitgeist and Fascination. Incidentally, it is only Wardog who previously appeared in Doctor Who Monthly. The rest of the Special Executive were introduced in this story and would eventually be absorbed into Gatechrasher’s Technet, but I’m getting ahead of myself again. Moore is obviously having fun here writing Cobweb, the precog character.

It would be the first home of Forbidden Planet, in Denmark Street - they moved to New Oxford Road in about 1991, and to their current home in Shaftesebury Avenue five years ago.

This from a 'year in review' in a magazine insert written in 1988.

"*Forbidden Planet opens a superstore in London’s New Oxford Street. The shop, product of internationally renowned designers, makes it acceptable to be seen in comics shops. Similar stores open in Glasgow and Cambridge – suddenly comics are ‘trendy’ enough for the High Street."

I feel like Captain Picard under interrogation by the Cardassians.

Wiki says the Shaftsbury Ave Forbidden Planet opened in Sep 2003, which is a pertinent date as I moved to London in Jan 2004

Sadly, I very much measure out the eras of my life depending on where my favourite comic shops were.

The Dawson street, Dublin branch mentioned in that link was where I bought The Killing Joke and DKR way back in 1988, and I met Garth Ennis there later.

Dave Palmer replied to Steve W's discussion A Cover a Day
"Let’s see, a doctor and malpractice.  That might lead to a courtroom in the future."
1 hour ago

Jeff of Earth-J replied to Jeff of Earth-J's discussion T.H.U.N.D.E.R. Agents
"Toby is still unclear that he killed his brother. I interpreted that line differently, as in,…"
1 hour ago

Jeff of Earth-J replied to Jeff of Earth-J's discussion Tales to Astonish
"The Executioner doesn't have his axe. Ooh, that could be a plot point in my head canon fanfic…"
2 hours ago

Jeff of Earth-J replied to Steve W's discussion A Cover a Day
""I'm not sure if the plot point of who the Valeyard, the prosecuting Time Lord, turned…"
2 hours ago

Luke Blanchard replied to Jeff of Earth-J's discussion Tales to Astonish
"The Executioner doesn't have his axe. It was taken off him when he was exiled to Earth in…"
5 hours ago

Richard Willis replied to Steve W's discussion A Cover a Day
"I don't have a transition cover. This final cover from me is not quite a courtroom but…"
6 hours ago

Lee Houston, Junior replied to Steve W's discussion A Cover a Day
"It is now after midnight where I live and since I will be away from my computer for most of Tuesday…"
9 hours ago