The Dreaming Vol. 1: Pathways and Emanations 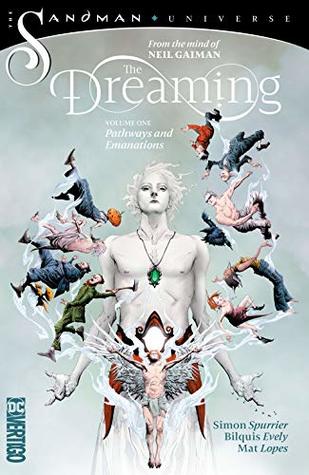 The first collection of the new titles in The Sandman Universe series. In addition to creating the characters these stories are based on in The Sandman, Neil Gaiman is credited with the story in the introductory story The Sandman Universe. Writer Simon Spurrier was one of the writers there, and is the sole writer for The Dreaming. He had previous experience in this world when he wrote the series Books of Magick: Life During Wartime from 2004-2005.

So it is not surprising that the storytelling voice is true to the original Sandman, certainly as much (or more) as any of the many earlier spin-offs. The series setup even echoes the original: The Dreaming is collapsing due to the absence of Dream (now Daniel instead of Morpheus, as he took over the role at the original series conclusion). The Universe story involves a huge number of original characters: Lucien the Librarian (who is in charge in Daniel's absence), Mervyn the pumpkin head, Eve, Cain and Abel, Tim Hunter, Doctor Occult (as Rose), Lucifer and others. A mysterious new character named Dora (the explorer?) is introduced--she has wings for ears.

The Dreaming series picks up where the introductory story leaves off. Lucien is afraid that Daniel has resigned as Dream, and does his best to keep The Dreaming together. But the barrier is failing: a demon from Hell invades, and almost succeeds. Things look so dicey that Lucien visits the Black Chest (where the worst nightmares have been exiled). The most significant character released is Judge Gallows (a Silver and Bronze Age DC character who never appeared in Gaiman's Sandman), who in turn releases Brute and his partner Glob.

This results in a power struggle that goes on forever (or maybe it just feels like that), with Gallows eventually commandeering a Milam Cascade, which is a lucid dreaming event that can undermine The Dreaming. His defeat leaves a surprising new entity in charge--definitely not a classic DC character. The storytelling pace is really slow, so it's less than a total success. But Bilquis Evely's art is pitch-perfect: the series always looks like a classic story from the Sandman universe, which goes a long way towards selling it. This is actually a big target, as the Sandman featured a revolving group of artists. But there's a general Fantasy style--certainly distinct from most superhero comic art--that you know when you see it. Worth exploring the other titles, at the very least.

After reading 5 or so issues of this series, I've determined I'm just not a fan of the Sandman universe. I sampled the main series a few times. I stuck with the original Lucifer series for 50(!) issues, and then this. It just never clicked with me.

I did think the art was great and Jae Lee did a bang-up job on the covers.

Yeah, I agree about the art and covers. I thought the storytelling was flawed, as I said in the review. But I liked it enough to read the next collection. Like the Books of Magic collection a lot (don't know if you read that review, or if you've read that series).