The Earth-44 Timeline, Appendix Six: The Legacy of the Batman

Bruce Wayne was born in Gotham City, New Jersey, mere weeks before the beginning of the First World War. While much of the world was in turmoil, young Bruce lived the comfortable life typical of the son of wealthy parents. It was only when his parents, Thomas and Martha Wayne, were murdered by a criminal in 1924 that young Bruce's life was set upon the course of legend.

Swearing to war on crime, Bruce spent the next 15 years training himself in mind and body for his war on crime. In 1939, he was ready and, after a bat flew in his study window while he was pondering what form his war should take, he began fighting crime as Batman. In 1940, Bruce met 13 year old Richard "Dick" Grayson, a member of a family of circus acrobats. When Dick's parents were killed by criminals, Bruce took Dick as his ward, and, after a period of training, Dick became Batman's crimefighting partner, Robin.

Batman and Robin soon became crimefighting legends, battling such bizare criminals as the Joker, Catwoman and the Penguin, among many others, many of whom filled the halls of Gotham's Arkham Asylum, founded in 1929. Also in 1940, Batman and several other heroes founded the legendary Justice Society of America. Robin, although not initially a member, joined the team several years later.

In 1950, Bruce himself married Selina Kyle, the reformed criminal known as Catwoman. In 1954, Dick and Vicki Grayson had a son, Richard "Dick" Grayson Junior. Bruce and Selina Wayne had a daughter, Helena Wayne, in 1957.

The legend of Batman began inspiring others outside the Wayne and Grayson families, sometimes in unexpected ways. In 1956, Kathy Kane began fighting crime as Batwoman. She was joined by her niece Betty in 1961, when the latter became Bat-Girl.

In 1959, Batman would discover just how far his fame had traveled when he encountered his extradimensional admirer, Bat-Mite.

Realizing that his super-heroic career was drawing near its end, both Batman began planning for the future of crimefighting. In 1960, when Batman gathered with other heroes to battle an invasion from the planet Appellax, he encouraged them to form a new super-team, the Justice League of America, to supplement the crimefighting efforts of the legendary Justice Society of America.

The forces of justice were strengthened when, in 1967, Dick Grayson Senior and Dick Grayson Junior, took over as Batman II and Robin II. The elder Batman retired from active crimefighting at this time, with Batman II taking the original's place in the League.That same year, Barbara Gordon adopted her crimefighting persona of Batgirl.

The legacy of Batman took a strange turn, as Kirk Langstrom became the Man-Bat in 1970. Helena Wayne began her own crimefighting career in 1977, calling herself "the Huntress" with the blessing of Bobbi Morse, the original Huntress, who subsequently adopted the codename  "Mockingbird".

The year 1980 saw Dick Grayson Junior strike out on his own, changing his super-heroic identity to Nightwing and founding the Titans with several other heroes. That same year, Harry and Helena Sims' daughter, Helena Sims the Younger, was born.  In 1982, Dick, Junior married Titans teammate Koriand'r of Tamaran, a.k.a. Starfire. The couple had a daughter, Mar'i Grayson, born in 1983. Mar'i joined the Titans as Nightstar in 1999, and later served with the X-Patrol.

In 1983, Batman II, along with several other heroes, founded the team known as the Outsiders. They team fought crime together for several years. However, after Batman II left the team a few years into its existence, some of the heart seemed to go out of the group, and it disbanded by the early 1990's.

In 1989, Helena Bertinelli became the third Huntress when Helena Wayne took a sabbatical from crimefighting.  Bertinelli was soon joined by Tim Drake, who became her sidekick,  Robin III. Drake acquired a frequent partner of his own in 1992, when he encountered the Spoiler (Stephanie Brown).

Tragedy struck in 1990 when Batman II was killed while battling alongside long-time X-Patrol member James "Logan" Howlett, a.k.a. Wolverine. Moved by Batman's sacrifice,  Wolverine moved to Gotham and took up the identity of the Dark Claw. In 1996, the Dark Claw took Jubilation Lee, who had been attending the Westchester School since 1989, as his crimefighting partner Sparrow.

In 1996, the Dark Claw and Sparrow helped found the JLX along with several other heroes. In 2004, Howlett went on to fund the founding of PS 238, a school for younger metahumans, operated in conjunction with the Westchester School. In addition to Howlett's money, the school was heavily subsidized by the Wayne Foundation as well.

Also in 1996, Barbara Gordon retired from super-heroing and took up her father's old position as police commissioner of Gotham City. The next few years saw the advent of several crimefighters inspired by the Batman legacy. in 1998, cousin William Wayne began using a robot to fight crime as the Batman III , and Cassandra Cain  became Batgirl II in 1999.  In 2001 the younger Helena Sims became the Huntress IV.

In 2005, Timothy Drake and Stephanie Brown both retired from costumed crimefighting, marrying and starting a family. Both eventually pursued more conventional forms of law enforcement. Tim's place as Helena Bertinelli's partner was taken by 15 year old Gothamite Carrie Kelley, who debuted as Robin IV, although she changed her crimefighting name to "Catgirl" in 2008.

Bruce Wayne, still vigorous in his old age, founded Batman, Incorporated, a team of like-minded crimefighters from around the world.  New heroes appeared in Gotham in 2016, as siblings Hank and Claire Clover debuted as Gotham and Gotham Girl. Farther afield, Wang Baixi debuted as the Bat-Man of China.  In 2024, at the age of 110, he helped train young Terry McGinnis, who became Batman V.

In 2025, Maria Stark II married Jon Kent. Tthe next year, she gave birth to twin daughters, Lois and Lara Kent, who would become Supergirl-Red and Supergirl-Blue in 2042.

Little is known of the legacy of the Batman after this point, although it is known that his legend lived on, so that in 3051, Brane Taylor became Batman VI, and even in the impossibly-distant 857th Century, Batman VII served as a founding member of Justice Legion A, protecting worlds the original Batman never knew. 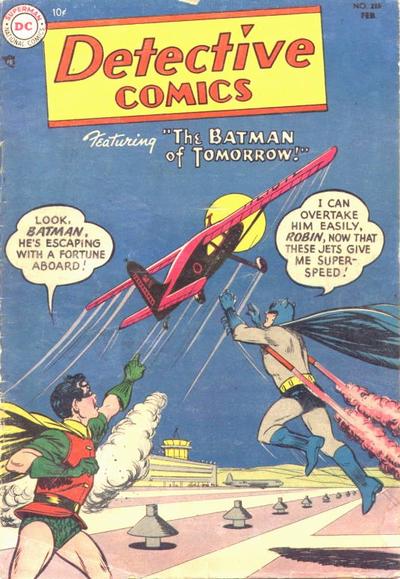 In the 31st century, BRANE TAYLOR and his nephew were inspired by historical records to take up the mantle of Batman and Robin. He first visited the 20th century in Batman #67 (O'51) when he needed the original Boy Wonder's help. He returned in Detective Comics #216 (F'55) when he had to stand in for the Caped Crusader when he injured his arm. Unfortunately he had limited knowledge of the era and kept flirting with Vicki Vale which made her suspicious of him.

Brane Taylor was loosely based on the character BRANE who lived in an alternate 31st century where Earth was conquered by evil Saturnians. Finding ancient film records with his nephew Ricki, they too were inspired to become the new Batman and Robin and lead the rebellion and eventually liberate the Earth in Batman #26 (D'44).

Both stories were reprinted in the 70s.

Hah, interesting. It always amazes me to realize how much DC history I don't know about.

Updated for the Earth-44 versions of Gotham, Gotham Girl and the Bat-Man of China

Jeff of Earth-J replied to Jeff of Earth-J's discussion Dark Shadows
""Elizabeth is shaken by this, and reverts back to her phobia about being buried…"
5 minutes ago

Jeff of Earth-J replied to Steve W's discussion A Cover a Day
""Wow, what an interesting month! Who would've thought that "first and last"…"
15 minutes ago

Steve W replied to Steve W's discussion A Cover a Day
"Wow, what an interesting month! Who would've thought that "first and last" would be…"
1 hour ago

Philip Portelli replied to Steve W's discussion A Cover a Day
"After Robin, Aqualad and Kid Flash teamed up in Brave & Bold #54 proved so popular…"
4 hours ago

Jeff of Earth-J replied to Jeff of Earth-J's discussion The Ninth Doctor Adventures
"4.3 - THE FORTH GENERATION: "The Forth Generation have emerged. The Doctor, the Brigadier, Sam…"
4 hours ago

ClarkKent_DC replied to Steve W's discussion A Cover a Day
"I loved that book."
6 hours ago

Jeff of Earth-J replied to Jeff of Earth-J's discussion Star Trek: Strange New Worlds
"STRANGE NEW WORLDS: As the episode begins, Enterprise is in drydock and has been for a year being…"
9 hours ago