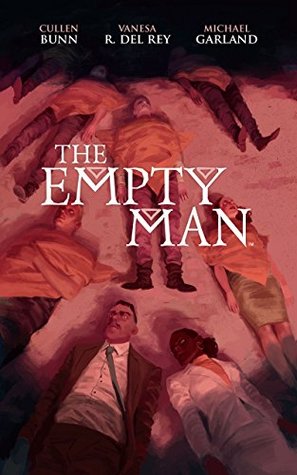 Horror writer Cullen Bunn has been so prolific that I completely missed this one. The Empty Man is a disease with bizarre (and varied) symptoms: hallucinations, fits of rage, suicidal acts, and finally death or a catatonic state. It seems to behave like a disease, but the cause and means of transmission are unknown. The process is so mysterious that cults arise that see the disease as some kind of spiritual transcendence.

The story is largely told as a police procedural, through the eyes of an FBI agent and a CDC investigator who are partnered in the joint investigation. This leads them to cult members, as well as the faith healing preacher whose small congregation at the beginning of the series has grown into a megachurch. The story goes completely mystical at the end, as The Empty Man appears to be a being who lives across a doorway in a purely mental realm.

The series ends in a kind of cliff-hanger. There has been a sequel, but I don't know if it picks up where this one left off. It is hard to see how a sequel could make sense of this, as it travels to such strange territory. It's not a convincing narrative: the mystical turn at the end feels completely unprepared, a surprise that does not really explain everything that went before.

I liked Vanesa Del Ray's art on her debut series Hit, and I like her covers for this series. But the interior art is sketchy enough to be distracting, which is the same reaction I have to her work on Jordie Bellaire's series Redlands. Between that and Bunn's confusing, inconclusive story, this was a less than satisfying read.