The clutch of shows released in the last month or so is just a prologue for the avalanche of genre television announced for 2020; I count more than 80 genre shows (supposedly) airing this year. A great many will probably get delayed until 2021, but still, it’s an impressive list.

But we’re talking what’s available right now. In a recent column I listed three shows that are must-sees, and they retain that distinction. So if you haven’t already watched “The Expanse” Season 4 (Amazon, 10 episodes), “For All Mankind” Season 1 (Apple TV+, 10 episodes) and “Watchmen” Season 1 (HBO, nine episodes), that’s a good starting point.

The Mandalorian Season 1: Imbedded in the DNA of Star Wars is the 1930s Western movie serial – which, when you remove all the high-tech gimmickry, is all A New Hope really is.

That’s why The Mandalorian works so well. Yes, it’s set a long time ago in a galaxy far, far away, and we recognize the F/X trappings (like the Boba Fett armor) from the movies. But the important events occur on dusty planets and in struggling, isolated townships where Tom Mix, John Wayne and even Sergio Leone would feel completely at home. By embracing its inner Western, Mandalorian becomes utterly plausible and completely absorbing, even when characters blither Star Wars technobabble.

And, yes, the outlaw with the heart of gold, the salt-of-the-earth townspeople and the shootout at high noon are tired cliches. But they came into existence originally because of dramatic need, and that need still exists. They work so well in The Mandalorian that you won’t even notice.

All eight episodes of The Mandalorian Season 1 are available on Disney+. A second season has been announced. But, boy, did Netflix get it right this time. Not only is the show internally consistent and narratively compelling, but the surprises are unexpected, the peril convincing and the production values outstanding.

What amazes me most, though, is that I really like these Robinsons! Most TV families are so saccharine they make your teeth ache. And the Robinsons are certainly close to perfect: They’re heroic, plucky, hyper-competent and amazingly resilient. So much so, the other characters even joke about it.

But they are also utterly human, with natural faults built into their character that can wound the heart. Mother Maureen (Molly Parker) is emotionally stunted. Series regular Don West (Ignacio Serricchio) is greedy. Will (Maxwell Jenkins) is probably on the spectrum. And Penny (Minda Sundwall) – well, we laughed when Jan, the forgotten middle child of The Brady Bunch, angrily chanted “Marsha, Marsha, Marsha.” But when the only Robinson who is utterly ordinary is blithely ignored by her superstar parents in favor of her flashy siblings, her pain is palpable.

One memorable aspect of the 1965-68 Lost in Space was the robot, and his relationship with Will (Bill Mumy). This show has something similar, but it’s also more complicated … and, frankly, a little frightening. The robot is protective of Will, but not to the exclusion of its own interests, and you never know what it’s thinking. It has its own agenda, and it’s built to kill.

The other part everyone remembers from Lost in Space 1.0 is Dr. Zachary “Oh the pain, the pain” Smith, brought memorably to life by Jonathan Harris. That might be daunting to the next actor to play Dr. Smith, but not Parker Posey, who absolutely nails the role. She’s no comedy relief; Posey’s Smith (an assumed name, BTW) is a malignant tumor in the cast, a remorseless, manipulative, amoral con woman who will sacrifice anyone at any time to get what she wants. Her smile can only ape genuine warmth, since she’s a sociopath – instead, it’s the chilling mien of a viper.

All 10 episodes of Lost in Space Season 2 are available on Netflix. A third season hasn’t been confirmed, but seems likely.

The Witcher Season 1: Based on the fantasy novel series by Andrzej Sapkowski, The Witcher stars Henry Cavill (Man of Steel) as Geralt of Rivia, a mutant who kills monsters for money in a pseudo-Medieval setting.

Cavill wears a white wig and yellow contacts, and grunts his lines like he has strep throat, so you won’t confuse him with Superman. Plus, the show displays an astonishing array of naked breasts, all sizes, shapes and colors, which haven’t accompanied Cavill since his days on The Tudors. I wouldn’t mention that if it wasn’t remarkable, but honestly, “topless” seems to be the default costume.

So “The Witcher” can be a bit silly, but it’s high quality and good fun. Unless you’re boobophobic, that is.

All eight episodes of The Witcher Season 1 are available on Netflix. A second season has been announced. In Harley Quinn, the titular star (voiced by Kelly Cuoco) finally breaks free of The Joker (Alan Tudyk) to live her best life.

Harley Quinn Season 1: Harley Quinn, as played by Margot Robbie, was certainly no shrinking violet in Suicide Squad. But the animated version of the character (voiced by Kaley Cuoco of Big Bang Theory) is even more unrestrained. As has been pointed out all over the Internet, there were 19 F-bombs in the first episode alone!

It’s easy to be distracted by all the “R” in this R-rated cartoon, but honestly, there’s a deeper story here. “Harley Quinn” is about a battered woman (Harley) finding the strength to leave her abuser (The Joker, voiced by Alan Tudyk of Powerless), learning to re-build her life (as a supervillain, instead of a sidekick), while drawing strength from the support of another woman (Poison Ivy, voiced by Lake Bell of In a World …”.

Seven episodes of Harley Quinn Season 1 are available on DC Universe, with six more on the way.

Doctor Who Season 12: The Thirteenth Doctor started her second season on Jan. 1 with “Spyfall — Part One,” in which MI6 enlists The Doctor to find out who is attacking all the world’s intelligence agencies. The surprise reveal is earned, and if you’re a Whovian, promises a big, ambitious season.

Two episodes of Doctor Who Season 12 have aired on BBC America, with eight more to go. A 13th season hasn’t been announced, but is virtually a given. 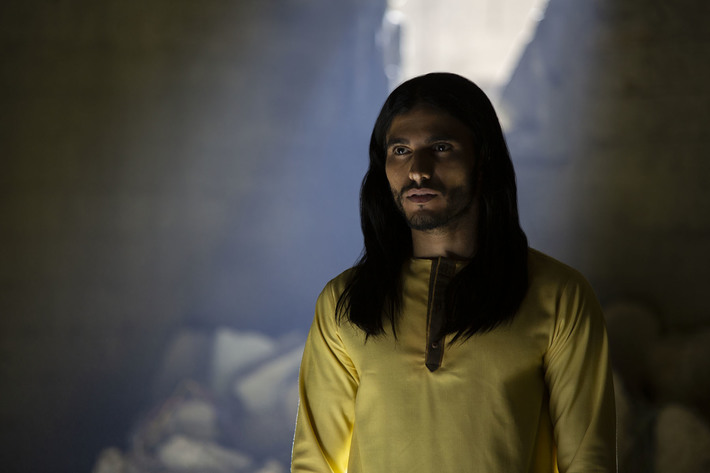 The Arabs call him Isa (Jesus) and el-Masih (Messiah). But is the mysterious man (Mehdi Dehbi) who stars in Messiah the son of God, or a talented con man?

Messiah: This is really more thriller than fantasy, as CIA agent Eva Geller (Michelle Monaghan) tries to figure out whether Al-Masih (Mehdi Dehbi), who shows up in the Middle East doing miracles and claiming to be the biblical Jesus, is the Second Coming or a fantastic con man. Which is he? Well, you have to watch the show to find out.

All 10 episodes of Messiah Season 1 are available on Netflix. A second season hasn’t been confirmed, but seems likely.

Dracula: There are only three episodes, but they amount to 4.5 hours – enough time to do some interesting things.

And Dracula, a BBC production, is always interesting, if not always good. The horror elements — like when a fly lands on a guy’s eye, and then walks around behind it — are truly gut-churning. But the production also drops the stilted, 19-century writing style of Bram Stoker (good), and employs some appropriate humor (also good), but also inserts some humor that slides into silliness or self-parody (bad).

Some other changes include updating the characters, such as turning Jonathan Harker (John Heffernan)  into a tragic hero, and transforming Abraham van Helsing into Sister Agatha van Helsing (Dolly Wells), a level-headed, insightful, evil-fighting nun with serious doubts about her faith. They are awesome.

Unfortunately, others don’t fare so well. The third episode brings us new versions of Lucy Westenra (Lydia West), Jack Seward (Matthew Beard) and Quincy Morris (Phil Dunster), who are tedious cliches and not the least bit interesting. Dracula himself (Claes Bang) is effective as an unrepentant monster who gleefully enjoys his awful acts, but occasionally goes too broad, and sinks into schtick. Especially in the third episode, which is a bloody mess, and not in a good way.

But the first two episodes are really good. Just stop there if you can.

All three episodes are available on Netflix. No second season has been announced, nor does one seem likely.