The Fade Out, Act One 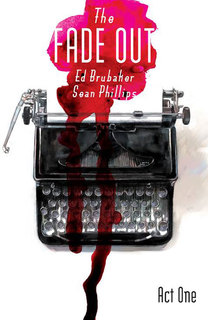 The Fade Out, Act One

The incomparable creative team of Brubaker and Phillips has always been at its best doing crime stories, and this new series starts out firing on all cylinders. The Fade Out supplies a double dose of noir: it’s a noir crime story about the making of a Hollywood film noir. The story begins in Los Angeles in Fall, 1948. Screenwriter Charlie Parish awakens in a bathtub--fully clothed, unsure where he is, and with little memory of the hard-drinking previous night. He’s just starting to piece things together when he walks into the living room and finds Valeria Sommers lying dead on the floor. She’s one of the stars of the movie he’s working on, and he’s alarmed to find himself thinking “What will this mean for the picture?”

Charlie realizes he was almost certainly nearby when she was strangled to death, and decides to wipe the site clean and slip out. This decision sets up much of the action that follows. When her body is discovered later that day he is shocked to see that it had been staged as a suicide. It seems a little late to go to the police now; he’d look even more involved than before. But the question of who staged the cover-up and why won’t let Charlie go.

This only scratches the surface of the secrets being kept here; practically every one of the main players appears to have at least one. Charlie has been unable to write since the war, and is actually being ghost-written by Gil Mason, an ex-screenwriter blacklisted as a Communist. Maya Silver (“The Replacement Blonde” hired to take over Veleria’s role in the movie) has a Hispanic ex-husband that the studio wants to keep secret. Phil Brodsky, the head of Studio Security, seems to know where most of the bodies are buried, and may have had a hand in dirty deeds more than once.

Mysterious as events have been, the final cover-up in the First Act tells Charlie that he’s in far deeper than he imagined. I can’t wait to see where this goes. Anyone who was a fan of their previous series Criminal will definitely want to check this out.

This is a fantastic series -- great for Criminal fans, and great for fans of Old Hollywood, like me.

Incidentally, I just started listening to a podcast Fade Out fans might enjoy (and which was mentioned in the letercol of issue 8) -- Karina Longworth's You Must Remember This, which details often-forgotten events in the history of Hollywood. It's really absorbing stuff.