The Fuse, Vol. 1: The Russia Shift 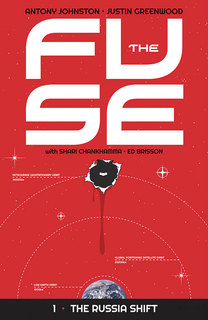 The Fuse is an orbiting energy platform, a five mile long jury-rigged steel city stuffed with a half million people. It's not considered a desirable posting, but for some reason Ralph Dietrich has volunteered to join the police force as a Homicide detective. He's barely off the shuttle when a homeless "cabler" dies in front of him. So he gets to work, accidentally insulting his new boss--the Fuse's oldest Homicide detective, Sergeant Klem Ristovych--in the process.

It's a science-fiction setting, but much of the rest of the story is a standard police procedural. We see the new partners learn to work together, while they work the case. Things quickly become complicated when a second cabler turns up dead, right in front of City Hall. Suspicion settles on everyone from the Mayor to his wife and staff, and the investigation shifts focus as new facts emerge.

All the while Ralph functions as the reader's proxy. As a newcomer, he's learning about the Fuse as he goes, and so do we. Like any good murder mystery, much of the fun is in the twists and turns. I think the storytellers play fair, but I was surprised by the resolution of the case. And then we finally find out what the subtitle of the collection means.

An altogether enjoyable combination of science fiction and mystery. Greenwood came up with distinctive character designs, and his interior designs are effective as well. The concept results in interiors that tend towards an industrial design similar to what would be found on Earth--so it can be easy to forget the extraterrestrial setting--but he makes good use of opportunities to show a unique view. We finally get to see the Fuse's perspective on the Earth at the very end.

I really like this book. IIRC, I nominated it for a few Cappies, including Klem for Best Female Character. And I have to say I was proud of myself for figuring out what The Russia Shift meant before the book revealed it.

The second story is really good, too; the third hasn't begun quite yet, but I'm looking forward to it!

Congrats on figuring out the meaning of the title; I had no clue. Klem is a great character, I agree.

Strangely enough, I hadn't realized it was a mystery until the reveal at the end. I just thought I had forgotten it or missed it in in some sloppy reading, and I was too lazy to go back and check, so I tried to figure it out for myself.