That’s a pretty subjective call, especially since I don’t know you. But here are some facts to back it up.  The Legend of Hercules, which premiered Jan. 10, was both a critical and financial failure. It cost an estimated $70 million to make, according to BoxOfficeMojo.com, but made less than $19 million. Audiences gave it a paltry 35 percent at RottenTomatoes.com, while critics were even less happy, at 3 percent.

So don’t confuse it with Hercules, the new movie premiering July 25. For one thing, Hercules has actors you’ve actually heard of, like Dwayne “The Rock” Johnson as Hercules, and John Hurt as his employer, King Cotys of Thrace. For another, the budget is a bit more generous, at $110 million (according to Forbes.com). 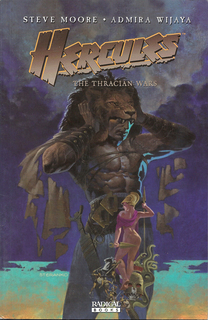 But mostly you should expect to like the new movie better than that other one because  Hercules is based on a graphic novel that’s pretty entertaining. Hercules: The Thracian Wars (Radical Comics, $14.95) tells the tale of a grittier son of Zeus than you usually see, with Hercules at a low point in his life, around 1200 B.C. – after the deaths of his family (by his own hands) and the Twelve Labors, but before his death (accidentally, at the hands of his next wife) and elevation to godhood.

Which is to say, it’s not a story you’ve ever read before. Hercules is really in the dumps here, depressed and sunk to merc work, his family dead, Hera’s hatred for him – as he is the product of Zeus’ philandering -- relentless. As the story opens he’s working as a sword-for-hire along with some other deity-doomed types, heading to barbarian Thrace to train the army of King Cotys.

And those companions, because UK writer Scott Moore reads translations of ancient Greek poets for recreation, are all authentic to the era (except one, who is invented for the tale). You have Iolaus, Hercules’ nephew, who had a hand in the slaying of the Hydra. There’s Autolycus, whose father is Apollo, god of thieves, which makes him an excellent liar, cheat, pickpocket and con man. The oracle Amphiaraus has come along because, well, for the same reason he does anything: The gods told him to.

Moore is not above taking some liberties with these characters, either, although it might be that he has just read considerably more than I have.

For example, one companion is Atalanta, a woman who grew up feral, suckled by a she-bear as a baby, who became a fierce warrior. She swore an oath of virginity to Artemis, the goddess of the hunt, and refused to marry any man who couldn’t outrun her. Due to a trick of Aphrodite one man did, and they not only married, but had sex in one of Zeus’ temples, and so were turned into lions for their trouble.

Well, that’s one story, anyway. In another Atalanta sailed with Jason and the Argonauts, where she was prevented from returning the love of the hero Meleager, due to a dire warning from an oracle about losing her virginity. Many adventures ensued, but the bottom line for us here is that Atalanta always seems to have trouble in the bedroom department.

In Thracian Wars, however, she is not only prevented from loving men, but is completely disinterested – she’s a lesbian. But because of losing her virginity to the footrace guy, she believes she can no longer serve Artemis (for some reason) and is searching for death on the battlefield, where she can join her goddess on the Elysian Fields. (Suicide would take her to Hades, of course.)

So, is that part of the legend of Atalanta? My reading doesn’t take much further than Bullfinch or Edith Hamilton, so I didn’t think so. But Moore certainly knows the legends better than I, so maybe so. And having Meleager follow her around like a lovesick puppy kind-of squares the circle.

Then there’s Tydeus. He pops up in some of the lore, but not doing much out of the ordinary. In Thracian Wars, however, he’s a berserker cannibal! I’m guessing “Tydeus the berserker cannibal” probably isn’t found in any of the Greek myths, no matter how many ancient poems you read!

But so what? Most mythology is chockablock with stories that contradict themselves. Names and times are transposed, characters flip to opposite sides of wars in different tellings, heroes sometimes have demises that are essentially multiple choice. So Thracian Wars is just another take on those myths – a few thousand years later, sure, but just as valid.

Valid, that is, if a good story is the result. And Moore doesn’t disappoint. Not only are his characters distinguishable by motivation, talents and behavior, but the time and place feel very real. And once Hercules and his gang hit Thrace, all kinds of shenanigans ensue. Ready yourself for sex, murder, double-crosses, bloody mayhem and, of course, Herculean feats!

All of this is illustrated by Admira Wijaya, an Indonesian artist whose work – probably rendered on Photoshop or something like it – looks painted. And one of the things I like most about it is his restraint. In many of today’s comics, the colorists have so much fun with all the possibilities of computer coloring that they go overboard. The result is pages that are muddy, or scenes where you can’t tell who is stabbing whom, and so forth. Not with Wijaya – his palettes, whatever the weather or scenery, never interfere with the story, and simply enhance the reading experience.

Not all of this makes it to the movie intact. The cast for Hercules listed at IMDb.com and elsewhere make no mention of two of Hercules’ comic-book companions, Meleager and Meneus. And, mysteriously, we do see listings for Hercules’ father, Zeus, and Hercules’ dead wife, Megara, neither of whom appear in the graphic novel. It appears Moore isn’t the only one who can take liberties with source material.

All of which is certain to make Hercules better than The Legend of Hercules. Of course, that’s a pretty low bar. Let’s hope The Rock & co. can take this story to the level of myth, where it belongs.

I'm pretty sure Atalanta is never mentioned again after marrying the guy that cheated in the footrace. Now Medea, her story keeps starting up again after you're sure it's over like a bad horror movie, but then Circe had already warned her that sorcery would ruin her life. And I'm surprised Zeus isn't in the graphic novel, he seems to get into every other version of Hercules.

I think the writer of this book -- Steve Moore, who just passed -- was trying to write a Hercules story like no one's seen before. So there were no gods, and Hercules' feats of strength were few (albeit pretty impressive). This Hercules, unlike virtually every other version I've ever read, isn't loud, cocksure and bombastic -- he's unusually subdued, virtually depressed. And he's doing merc work, which is pretty bottom of the barrel. He's not really a hero in this book, just a guy who's lost his family and trying to get by in a brutal, barbaric world.

Sadly, there have been calls to boycott the movie from people close to the late Steve Moore, as the comics company - Radical - managed to do Steve out of any return from the movie rights, and the movie company weren't interested in rectifying that wrong.

To rub salt into the wound, they have percieved that the film company were happy to take advantage of Steve's death as extra marketing for their film, even though they weren't interested in properly acknowledging his contribution while he was alive.

I never even knew there was a Legend of Hercules movie.

I'd heard the comic series was good.  Sounds like even calling it "the Legend of Hercules" is a departure from the tone and intent of Moore's comic.

You mention Meleager and Meneus.  Perhaps one of them is the companion that Moore implied/showed was a lover of Hercules, as was the way back then, but of course,  he wouldn't get into a movie starring the Rock!

Sadly, that puts Steve Moore in the same group as many big stars like Jack Kirby.

Sadly, there have been calls to boycott the movie from people close to the late Steve Moore, as the comics company - Radical - managed to do Steve out of any return from the movie rights, and the movie company weren't interested in rectifying that wrong.

To rub salt into the wound, they have percieved that the film company were happy to take advantage of Steve's death as extra marketing for their film, even though they weren't interested in properly acknowledging his contribution while he was alive.

Seems to be how the industry works...  Ironic that they are all about pedaling stories of heroes who stick up for the powerless!

Because the people in charge don't see themselves as doing anything wrong, just following business practices. A lot of people furiously complain about how someone mistreats or rips off someone, while at the same time seeing nothing wrong with them doing the exact same thing. Somehow the rules are different for them.