The treasures of the Louvre museum have inspired an untold number of painters, sculptors, poets, musicians and other artists. Now, comics artists are prominently on that list.

That’s because French publisher Futuropolis has been collaborating with the Louvre for years, inviting A-list artists from around the world to dream up graphic novels, with the only specification being that they must in some way be inspired by the Musee du Louvre. The results have been both commercially and critically successful in Europe. And now, thanks to NBM Publishing, a lot of them are over here. The two latest to arrive on U.S. shores are the long-out-of-print Glacial Period, by Nicolas de Crecy ($22.99). The second, Phantoms of the Louvre, by superstar European artist Enki Bilal ($29.99), is new.

Bilal, famed for his 10-year project The Nikopol Trilogy, firmly lives up to his rep with Phantoms. His approach isn’t a single narrative, but 22 of them – each telling the tale of the models for various famous works. Bilal tells how they lived, but more importantly, how they died, since it is their ghosts that haunt the Louvre of Bilal’s imagination.

And what a variety! Bilal’s selections cover 5,000 years of human history, from an Egyptian mask to the Mona Lisa, from the Human-Headed Winged Bull of Mesopotamia to the Winged Victory of Samothrace.

Each work is photographed with a painting of the model, usually at the moment of death, superimposed on top. Those deaths, by the way, are often appalling – life in pre-modern times was, as Thomas Hobbes once said, “poor, nasty, brutish and short.” These models often died horribly – poisoned, beheaded, drowned, stabbed in the neck. It’s a catalog of human suffering.

Which Bilal captures magnificently. A death scene by its nature has an immediate impact, and especially so with Bilal, whose skill with expression is nonpareil.

Now, some purists will resent a modern artist like Bilal using classic works as, essentially, his canvas. To which I say: Phooey. Bilal is doing what artists have always done, which is to stand on the shoulders of giants to push forward into the new and unknown. And when it results in beautiful work like this, I can’t entertain the argument. 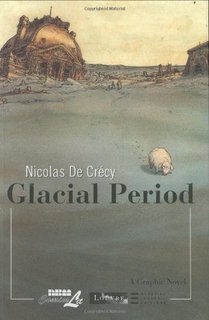 Besides, you can see all these works in their original form with a Google search, or a visit to the Louvre itself. Phantoms has a handy series of maps in the back, locating each of the 22 works re-visited by Bilal, so you can find them easily should you ever be in Paris.

The second book , Glacial Period, was actually the first Louvre book published, before de Crecy was well known, and it’s been out of print for a while. But that’s all changed – Glacial Period has now sold close to 100,000 copies, and de Crecy’s sketch style of cartooning and dry, absurdist humor have become popular in Europe, and in the U.S. to a degree, with his virtually surreal “Salvatore” series (also published by NBM).

De Crecy’s take is to look at the Louvre from far in the future, after an ice age has buried the current world for centuries. Archaeologists poke around in the ice, with pig-dog hybrids whose noses have been genetically enhanced to smell time, so that they can identify what year an object was created or last handled. Of course they can talk, and one of them has a crush on one of the female humans, who is also being pursued by the leader of the expedition. (Hey, there has to be some sort of romantic trouble – it’s French!)

That’s the set-up. They payoff is when the team gets separated, with each smaller group finding the Louvre more or less on their own. Having no idea what 21st century life was like, they can only guess what all this stuff means. Do all these pictures (and no documents) mean the ancients were illiterate? Do all the nudes mean that the Louvre was a house of prostitution? Their wild guesses – coupled with pompous, arrogant certainty – are pretty amusing.

Weirdly – or maybe we should expect this, given it’s de Crecy – all the paintings and statues come to life about midway through the book, because A) they’re art, and they want to be looked at, and B) they don’t like living under the ice. So they want out. There’s no explanation for this, so you just have to go with the flow.

From there the book spirals into some even weirder stuff, but it fits together with the dreamlike logic and sense of the absurd de Crecy brings to everything he does. It’s preposterous, but feels right somehow. Glacial Period also has an index in the back, identifying each work of art in the order they are shown in the book, by page number. So again, it wouldn’t be hard to follow the artist’s muse through the museum, should you visit.

Both books are highly recommended, if for no other reason than to learn about and appreciate the powerful legacy of art left to us by our ancestors, and preserved at the most visited museum in the world.

Elsewhere at NBM, another book poked its head forward and demanded to be read. That would be Dog Butts and Love. And Stuff Like That. And Cats ($13.99), by Jim Benton. It’s a collection of cartoons by the creator of SpyDogs (which became a Fox Kids animated series) and the web cartoons It’s Happy Bunny and Dear Dumb Diary.

To tell you the truth, I was put off by the cover, which showed a cartoony dog in three vignettes which looked like it took about 30 seconds (and no talent) to draw. That seemed a bit self-indulgent of the artist, plus I’m not usually entertained by collections of gag-a-day strips. They tend to fall into ruts, with five or six basic gags in continuous rotation.

It was marvelously entertaining, because Benton is obviously insane, or insanely creative. No two gags were very much alike, and tone and subject matter ranged from light-hearted “The Far Side” kind of stuff, to the black humor of Charles Addams’ “The Addams Family,” and everywhere in between.

Dog Butts turned out to be genuinely original and very entertaining, which was a welcome surprise.

Man, everything sounds like a really fun read. These are going to be put on my "to-get list" along with a million other books.