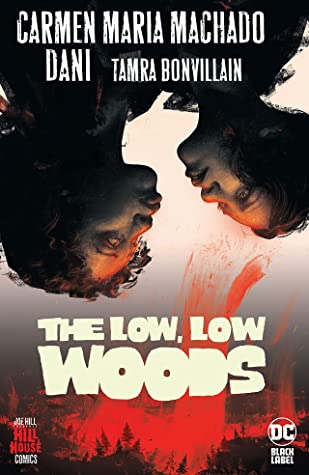 This entry in Joe Hill's Hill House Comics is a strange one. It takes place in a hellscape called Shudder-to-Think, Pennsylvania. The coal mines have been burning underground, calling the setting of the Silent Hill movies to mind. This isn't quite as apocalyptic, but it's close. The story opens innocuously enough: two young women awaken in a movie theater, having apparently fallen asleep. But one of them is convinced that something happened to them. Then on the way home they are first attacked by a rabbit, then chased by some sort of mutant deer.

It turns out that memory loss is a common among the women in town. The more the girls investigate what happened to them, the stranger things get. There are the mysterious skinless men, the women who turn into sinkholes, and the town has a witch. When pressed, she reveals the town's strange history. The water at the old spa induces forgetfulness--a fact that was an open secret among the town's men. Remembering her own sexual abuse, the witch cast a spell sending all of the men underground. But the spell went wrong, starting the fires. A spell intended to help the women instead turned them into half-things (rabbits, deer, trees, sinkholes).

After a climactic event, the two friends and the witch make up potions to give the remaining women in town a choice: they deliver two potions to each of them, one to remember, and one to forget. So this is a rare horror story that not only explains the source of the horror, but even provides a resolution. But it takes its time getting there, and in the end both the magical water and the witchcraft were too much to accept, for me.

Despite the admirable focus on women's rights (and positive LGBTQ portrayal), it didn't pay off for me. It was certainly not the art's fault: DaNi and Tamra Bonvillain were effective storytellers, and despite the horror the book has a warm, organic feel. The collection concludes with a lovely collection of Jenny Frison's variant covers, as well as interviews with writer and artist (including character sketches).