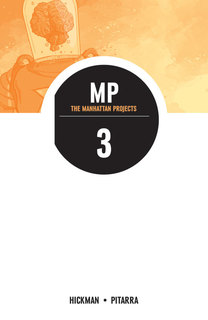 Back again with the Bad Boys of Science. The main focus in the first few issues here is on Harry Daghlian (the guy in the containment suit who looks like a radioactive skeleton) and his friend Enrico Fermi. Their relationship is far more complex than it appears. Like so many things in this series, there are secrets involved. Fermi is not a man at all, but a shape-shifting alien (which I'm pretty sure we already knew, but we get a full flashback explanation here). Fermi was actually a drone, serving unknown masters. A flashback to the teleportation mission to another world earlier in the series shows Fermi being given orders to stop the humans from developing extraplanetary space travel. Here we see his attempt to act on those orders, which does not come out well for him. The scientists have continually demonstrated an ability to overcome any obstacles to their rule, and this is no exception.

Daghlian suspects there is more to the story, but the only other surviving member of the mission is Einstein. Einstein has his own agenda as he pursues the perfection of humanity via genetic means. And of course there's Oppenheimer, who has huge plans to match his multiple personalities. He reveals many of them to the group, but the biggest one remains his secret...for now.

Oppenheimer has been talking to President Kennedy about the Manhattan Projects scientists, playing on paranoia about communists (apparently ex-Nazis are OK). Next thing you know, an invasion force led by General Westmoreland shows up, and all of the scientists wind up in chains in a prison cell. This takes out the external opposition to his grand plan, the secret Project Charon.

But there's still the war within among his fractured personalities. The final issue in this collection (another episode of "Finite Oppenheimers") revisits the Oppenheimer Civil War taking place in Oppenheimer's psyche, as Joseph faces off against his brother Robert. It remains to be seen what the effect will be in the real world. This issue was illustrated by guest artist Ryan Browne, who does a good job, and keeps the look compatible with regular series artist Nick Pitarra.

While all of these events are unfolding on the moonbase, Laika the cosmonaut dog is out in space, about to encounter something unexpected and unknown. Still lots of balls in the air.

Hickman is known for his long-term planning on his superhero projects. But when this series started he said in interviews that he was going to let it grow more organically. I can believe that, in the sense that I don't detect any Big Plan in the action so far. But he has certainly been willing to make big changes. The fall of the Illuminati in the previous volume was a shock, as was the death of Enrico Fermi in this one. I hope he does have a plan for the Oppenheimer Civil War subplot, because there have already been two issues devoted to it without much plot movement. It could get tedious if it doesn't start going somewhere, and soon.