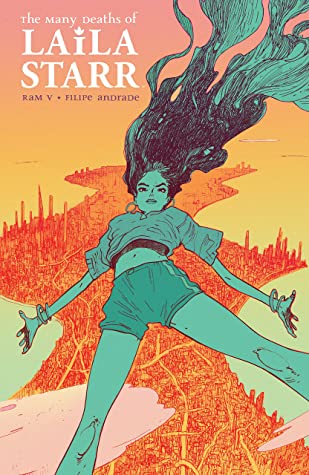 This five-issue miniseries is set in India, and pursues its questions about life and death in a Hindu context. As the story begins the avatar of Death (who is drawn to look like Kali, with blue skin and multiple arms) is summoned to a meeting with God (who is drawn to look like Brahma, the Creator, with three heads). It seems that a human being is about to discover the secret to eternal life, so her services will no longer be required. What's a goddess to do? Since she is condemned to a mortal life, she convinces a heavenly functionary to send her into a mortal body near the future inventor of immortality, intending to cut off the problem at the source.

That body is the titular Laila Starr, a twenty-something woman who has just died after falling (or jumping) from a skyscraper during a party. Laila awakens in the very hospital where the inventor (an infant named Darius) has recently been born. Unable to kill the child, she runs out of the hospital and straight into the path of a huge truck, dying for the first time. She regains consciousness in the company of Pranah (usually spelled Prana), the god of Life, who brought her back to life for old times' sake. It is eight years later, so the child is not a baby anymore.

The title is "the many deaths," so you can see where this is going. She finds the kid--at a funeral, of all things--but is pulled under water and drowned before she can do anything, and comes back to life twelve years later. Then sixteen years later (after dying in a fire), and finally twenty-eight years later (after being buried under a collapsed temple). By now she has gotten to know Darius. He is elderly, and dying of a terminal disease. But he tells her that he discovered immortality three weeks after his forty-ninth birthday and put it in an old shoebox, where it has been sitting in his closet ever since. He has come to believe that life itself is the real miracle, and Lailah seems to believe it, too.

This is a beautiful story, with echoes of Neil Gaiman's Death character in The Sandman, as well as Fábio Moon and Gabriel Bá's Vertigo miniseries Daytripper. Andrade's visual style is simple but effective, with an especially broad color palette (Inês Amaro is credited with color assists): here naturalistic earth colors, there psychedelic oranges and reds.

I loved this story. It reminded me of Gaiman, too. And thanks for the reminder that I should really read Daytripper! I actually have those comics -- I think even close at hand! -- yet somehow never read more than the first couple issues.

Richard Willis replied to Steve W's discussion A Cover a Day
"The comic title Space Family Robinson started in 1962. Although I never bought the title, I…"
13 minutes ago

Richard Willis replied to Steve W's discussion A Cover a Day
"I quoted the "No Wire Hangers" line to my wife soon after we were married. It made her…"
16 minutes ago

Philip Portelli replied to Steve W's discussion A Cover a Day
""NO WIRE HANGERS!!!""
3 hours ago

Jeff of Earth-J replied to Wandering Sensei: Moderator Man's discussion What Comic Books Have You Read Today?
"EDITING..."
3 hours ago

Tracy of Moon-T replied to Wandering Sensei: Moderator Man's discussion What Comic Books Have You Read Today?
4 hours ago

Jeff of Earth-J replied to Wandering Sensei: Moderator Man's discussion What Comic Books Have You Read Today?
""GOLDEN AGE" FIND!: When I went to my LCS today, the owner pulled out a box of his most…"
4 hours ago

Jeff of Earth-J replied to Jeff of Earth-J's discussion Ultraman Tiga
"Yikes! It's been four months since we stopped watching Ultraman (Tiga). Now that TV is off the…"
4 hours ago