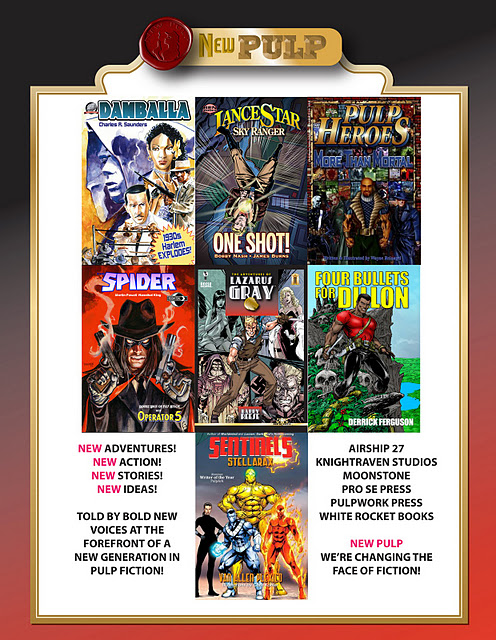 I'll ask around and see if I can get an answer to your question.  Stand by.

Sorry to interject a "Classic Pulp" question in the New Pulp thread, but I'm willing to bet this is a good place to get an answer:

Anyone know where I can find a checklist of Whisperer stories?  (I'm primarily interested in the long-form stories from The Whisperer, rather than the back-ups in The Shadow.)  I've Googled my fingers off without no success.

Maybe this can help:

King of Jungle only here to help.

It's been a while, but in the time since I last added to this thread, I've researched New Pulp quite a bit.

Over that time I've seen some good and bad stuff, and recently, I stumbled on something that I think is going to turn out to be the game-changer for the genre.

Read on, and I would appreciate your comments: My post.

Permalink Reply by Ron M. on September 5, 2014 at 1:39am
Looks like it's already starting to fade away again. Several companies listed as publishing pulp fiction have annoounced they've closed up.

Wow, so some companies listed in a post from 2-3 years ago aren't all still opened? I'm shocked....

Companies used to last a lot longer than two or three years.

Okay, been a while since I visited this thread, so a quickie update.

The Pro Se Presents magazine was canceled with issue 20 earlier this year, otherwise ALL the companies I mentioned in the starting post (Airship 27, Pro Se Press, Moonstone, Nostalgia Ventures, Radio Archives, and White Rocket Books) are alive and well.

...which will be publishing a project I contributed to this winter entitled Singularity: Rise of the Post-Humans, including a story by DAVID MICHELINIE! Along with Jennie Wood, Nancy Hansen, John F. Allen, Brant Folwer, series concept creator Jamie Ramos, and myself.

...and Mechanoid Press, which has published two volumes (to date) in their wonderful, kaiju inspired Monster Earth series.

Meanwhile, since my last post on this thread, I have written (and seen published) two books in the Hugh Monn, Private Detective series, (the first an anthology featuring the title character and the second his first full length novel entitled Catch A Rising Star). The first book for Alpha the superhero was officially entitled Project Alpha, to avoid confusion with another book that was being released about the same time as mine, and numerous short stories.

I have a lot more short stories either in progress or awaiting publication, and am also at work on Alpha, Book 2: Wayward Son; as the fledgling superhero searches for his place in the universe after the conclusion of Book 1. I am working diligently on this manuscript because I want it to be as perfect as humanly possible considering where Alpha winds up calling "home" and the fact this novel will be the foundation for the future of the series, which is currently plotted through the sixth volume.

Everything by everyone can be found on Amazon, so happy reading!

How do you download Pro Se Press' submission guidelines? I tried and couldn't read it.

In all honesty Ron, I'm not sure that page of the website is downloadable.

You can always copy and paste the information from http://prose-press.com/submission-guidelines/ into a separate word document for reference.

Lee Houston, Junior replied to Steve W's discussion A Cover a Day
"Had a very long day and am just now getting here. Below is Neal Adams' only contribution to…"
1 hour ago

Richard Willis replied to Wandering Sensei: Moderator Man's discussion What Comic Books Have You Read Today?
"Jeff of Earth-J said: I wish I'd've thought of this years ago rather than waiting for…"
2 hours ago

Captain Comics replied to Captain Comics's discussion Conan license yanked from Marvel Comics
"I haven’t read many Trav, but what I read I liked. I recently bought the omnibus, which is in…"
3 hours ago

Richard Willis replied to Jeff of Earth-J's discussion Swamp Thing
"ISSUES #38-39: If I am going to willingly suspend my sense of disbelief, this is how vampires must…"
3 hours ago

Jeff of Earth-J replied to Jeff of Earth-J's discussion Tarzan Comic Books & Comic Strips
"TARZAN: THE NEW ADVENTURES: Haven't read this yet (just bought it today), but, man, am I…"
6 hours ago

Jeff of Earth-J replied to Wandering Sensei: Moderator Man's discussion What Comic Books Have You Read Today?
"AMAZING SPIDER-MAN #2: About three years ago, while reading the 100-Page Crisis on Infinite Earths…"
6 hours ago

Philip Portelli replied to PowerBook Pete, the Mad Mod's discussion Anything, Everything, or Nothing At All
"I had a telephone hearing for my Social Security Disability Benefits today and the lawyer is almost…"
7 hours ago

ClarkKent_DC replied to Jeff of Earth-J's discussion Swamp Thing
"People make a lot of John Constantine's resemblance to Sting, but nobody notes that in his…"
8 hours ago

Philip Portelli replied to Steve W's discussion A Cover a Day
"Bork from The Power Company had a Neal Adams pedigree! "
8 hours ago

Jeff of Earth-J replied to Jeff of Earth-J's discussion Terry Moore - The SiP-verse
""When Annie Graham's lifeless body washes up Venice beach, the nation mourns the loss of…"
9 hours ago