"On the Sphere of Freedom, the Doctor is about to shut down an evil Immersive Games business empire. He’s assisted by a valiant galley chef called Nova. But his plan spectacularly fails... And who exactly is Audrey?"

"Nova is dislocated in time while the Time Eddies are out of control. Meanwhile, the Doctor is about to face the end of the universe. Or is that just the Battle of Waterloo?"

"The TARDIS is starting to get a little crowded! Audrey finds herself haunted by a ghostly Doctor."

I had been looking forward to the return of Christopher Eccleston as the Doctor for a long time, but when it was released, I just wasn't in the mood. For whatever reason, I tend to listen to audios in the winter and music in the summer. I used to think it was a temperature thing, but now I think it's more of a light thing. A cool, dark commute before sunup is more like sitting in a darkened movie theater, I guess. At this point, I actually have the first two box sets. Tracy and I took a little road trip today and were in the car long enough to listen to the first set in its entirety.

The story begins with a huge victory, thrusting the Ninth Doctor immediately into his element. Suddenly, disaster strikes! A woman named Nova is swept away in a "time eddy." Nova is not his companion, per se; in fact, he barely knows her. But she is his ally, and it's up to him to save her. His first trip takes him to London in 1959 (where people actually know what a police box is), a London being invaded by Roman Centurions. What is causing time to go so badly wrong? From Piccadilly Circus he travels to Belgium in 1815 and to a far-flung future in which machine intelligences regard sentient life as mere biofuel.

This is a pretty convoluted plot to follow, especially three stories at once without a break in between to let the details sink in. At one point, he crosses his own time line. Under normal circumstances, the TARDIS's time buffers would prevent such a thing from happening, but the time eddies are playing hob with her internal circuits. He eventually loops back to the point he crossed in the first place and... oh, nevermind. I'm going to have to listen to this one again. That's a good thing, though. The best Doctor Who stories should leave you a little confused.

Perhaps now I'll get to that second set sooner rather than later.

RESPOND TO ALL CALLS

Interesting. I found this story funny (The Doctor) and tedious (class struggle) with a compelling twist. The bloodthirsty daughter of the Lord starts out as an curious character but ends up being cardboard.

THE CURSE OF LADY MACBETH: "The TARDIS is drawn to Scotland again – to the troubled Kingdom of Moray, and its Queen Gruach. Or, as the Doctor knows her better, Lady Macbeth. While some believe she is the cause of her people’s woes, she may yet become their saviour."

I really wish this one would have included "Writer's Notes" because I'm curious about the story behind the story, but Big Finish stopped including those a while ago. Perhaps there'll be some "audio extras" at the end of the set. I'm familiar with the Shakespeare play (having taught it twice at the high school level), but this is nothing like that. Like I said, I'm curious about it, but I think tracy enjoyed it mare than I did.

This mare did enjoy it. Immensely.

I could clearly picture the Scottish landscape and cast of characters. The story was well written. I immediately wanted to listen to it again, to hear things I missed the first time around.

THE CURSE OF LADY MACBETH: "The TARDIS is drawn to Scotland again –

Like I said, I'm curious about it, but I think tracy enjoyed it mare than I did.

MONSTERS IN METROPOLIS: "Berlin, 1927. The making of a science fiction legend. But death stalks the film set and history is not what the Doctor expects it to be. And this new ‘Machine Man’ is a more terrifying vision of humanity’s future than Fritz Lang had in mind."

If you've figured out that the "Machine Man" is a Cyberman, go to the head of the class. (Then again, the cover of the set is a dead giveaway, innint?) Fritz Lang's Metropolis is still fresh in my mind after having re-watched it fairly recently, and this is one of those stories that I know from the very first scene I'm going to enjoy. (It reminds me in some ways of Invaders from Mars, the Eighth Doctor story set against the backdrop of Orson Welles' infamous broadcast a decade or so later.)

This is the perfect story for Christopher Eccleston's Ninth Doctor whom he portrays with a certain sense of childlike wonder. He gushes about the importance of Metropolis to future movies such as Star Trek and Star Wars (and also mentions Singin' in the Rain), which prompts another character to remark, "So many words, so little sense." He also expresses a certain amount of wonder at the level of German creativity "between..." (then he catches himself), "After. I meant 'after.' After the First World War," to which another character responds, "The 'first'?"

"Nevermind. Forget I said anything."

Shades of "Twice Upon a Time", where the Capaldi Doctor says something similar to the Captain.

He also expresses a certain amount of wonder at the level of German creativity "between..." (then he catches himself), "After. I meant 'after.' After the First World War," to which another character responds, "The 'first'?"

"Nevermind. Forget I said anything."

Today is Tracy's birthday so we started listening to the fourth set of her favorite Doctor's adventures. 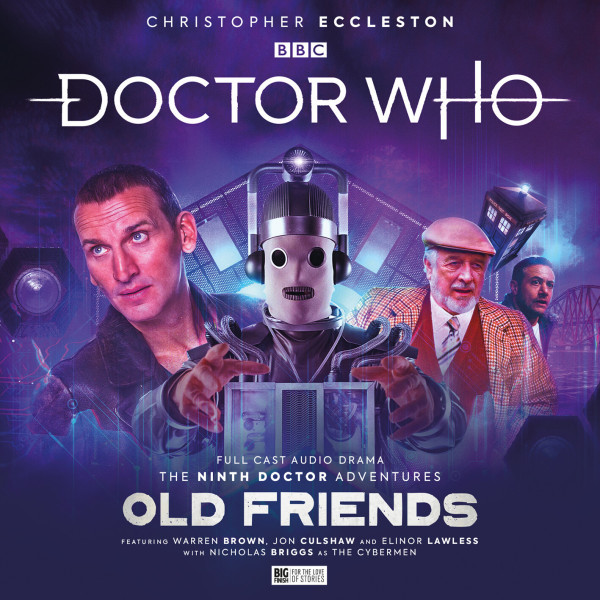 "Travelling the universe alone, the Doctor can’t help running into people. Some are new acquaintances, and some have a much longer history, back through all of his lives."

4.1 - FOND FAREWELL: "Fond Farewell is the intergalactic funeral parlor with a difference: the deceased attend their own wake! Invited by celebrated naturalist Flynn Beckett to his memorial, the Doctor finds he's not quite the man he was. But who would steal the memories of the dead?"

Invited to attend the wake of a former friend and ally by the deceased himself, the Doctor finds that the deceased doesn't remember him. The funeral home downloads the memories of their deceased clients into simulcra, but they delete the memories of their actual passing to avoid trauma. Theoretically more memories could be deleted, and that is apparently what has happened to the Doctor's friend. But why? Good standalone episode.

4.2 - WAY OF THE BURRYMAN: "Young Sam Bishop is at a crossroads with girlfriend Fiona: she’s staying in Scotland, he wants to travel the world. As the Burryman celebrations begin, ghosts haunt the Forth Bridge. Brigadier Lethbridge-Stewart arrives to investigate – and so does the Doctor…"

Lots of history (the Forth Bridge) and culture (the Burryman) with this one. It is also the reunion of the Doctor and the Brig we never did get to see on TV. ("The Doctor with a buzz cut! We'll make a military man of you yet!") You'd swear the guy playing the Brigadier was old Nick Courtney himself. They reminisce about "The Five Doctors." the doctor remembers attending the Brigadier's retirement party, but not being transported to Gallifrey (or he pretends not to), saying it was too many regenerations ago. What were thought to be ghosts of those who died constructing the Forth Bridge end up being Mondasian Cybermen. Part one of two.

4.3 - THE FORTH GENERATION: "The Forth Generation have emerged. The Doctor, the Brigadier, Sam and Fiona are at their mercy. Is there a way to defeat them? Has UNIT learned from the past? And can the enemy’s nature be changed for the future?"

I kinda lost the story between last week and this, but it sure was nostalgic seeing this Doctor with the Brigadier and two generations of Cybermen.

JD DeLuzio replied to Steve W's discussion A Cover a Day
"It stands to reason that, with all of the running around in dangerous environments, sometimes…"
2 hours ago

Philip Portelli replied to Steve W's discussion A Cover a Day
"By a strange coincidence, tomorrow (Thursday 2/2), TCM will be showing classic Dr. Kildare and Dr.…"
10 hours ago

Jeff of Earth-J replied to Jeff of Earth-J's discussion Tales to Astonish
"Are Stan (and Jack) thinking back to earlier in their lives? Possibly. I think they were of the…"
10 hours ago

Richard Willis replied to Peter Wrexham's discussion Celebrity Mastermind - "The History of DC Comics"
"The Baron said: We have a long history of "celebrities" on game shows and quiz shows here…"
12 hours ago

Richard Willis replied to Jeff of Earth-J's discussion Tales to Astonish
"Jeff of Earth-J said: Ducking into a movie theater playing a newsreel, he briefly spots a man whom…"
12 hours ago

Steve W replied to Steve W's discussion A Cover a Day
"As it's still day one, here's another romance from me."
14 hours ago

Richard Willis replied to Jeff of Earth-J's discussion T.H.U.N.D.E.R. Agents
"I was catching up with other things and haven't yet read the IDW issues. I'll get to them…"
15 hours ago

Richard Willis replied to Steve W's discussion A Cover a Day
"When I saw Fantastic Four #4, the cover had a guy in swim trunks coming out of the ocean. He was…"
15 hours ago