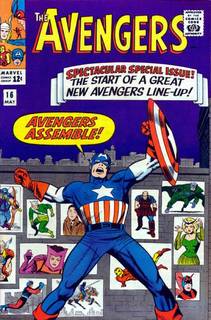 As you can see, there have been some changes around here! Let's take them in order:

MODERATORS: Just like in Avengers #16 (at left), many of our veteran Moderators are stepping down to star in their own books pay more attention to lives and careers. Let's have a hearty Legionnaire huzzah for outgoing Mods Doc Beechler, Sly Beechler, Rich Lane and Mike Williams for their long service. And let's have a salute for Jeff "Wandering Sensei" Carter, Ana Fluit, Chris Fluit and Jeff "Cavaliere" Polier, who are Moderators Emeriti -- no longer day to day, but still on call. And now let's give a laurel and hearty handshake to our newest Moderators: Travis Herrick, Jason Marconnet and Mark Sullivan, who join returning Mods Tim "Powerbook Pete" Cousar, John Dunbar, Craig "Mr. Silver Age" Shutt and "Captain Comics" Smith. Which one of our new three Mods is Hawkeye, Quicksilver or Scarlet Witch will be for them to decide!

LAYOUT: Yes, the layout has changed. That's because Ning no longer supports what we used to have, and bit by bit we were losing functionality. Today I bit the bullet and switched to a supported layout. I've re-ordered our elements to make them as user-friendly as possible, but I'm eager for suggestions. Note: Your personal pages have defaulted to the overall layout, but according to Ning you can choose a new background (although I haven't figured out how to do that yet.)

NEW STUFF: I imagine most of you have noticed the Chat windows. Yes, you can see who's here at any given moment, and talk in real time. That's one of the new features we'll be rolling out (just as soon as I figure out how to use 'em!) I've played with the "mobile" functions for you to view the site on pads and phones, but -- again -- I'm no expert and if you have suggestions I'm all ears.