The sensational saga of the Sinister Six, Spidey's greatest foes! 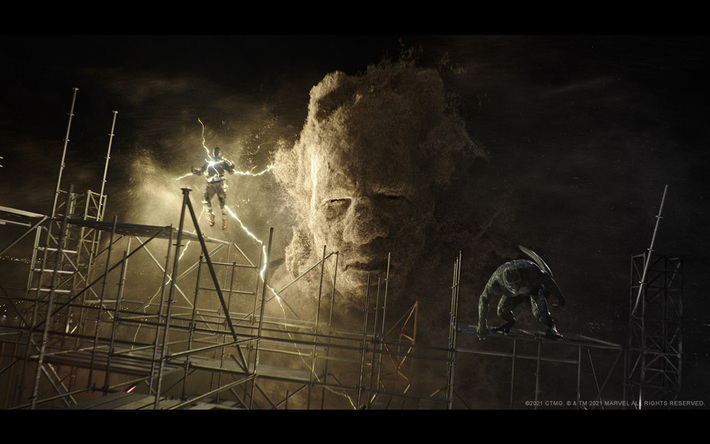 Dec. 23, 2021 — Spider-Man: No Way Home hit theaters Dec. 17, featuring a lot of villains from the three Spider-Man film series. To comics fans, all those villains — and their specific identities — suggest a recurring threat in Spider-Man comics:

Evidently, the villains in No Way Home aren’t ever called the Sinister Six. And there’s only five of them. But you know what? When it comes to the Sinister Six, neither of those things are a problem!

Here are three of my favorite iterations of Spidey’s oldest and most dangerous supervillain team: The lethal sextet first appeared 57 years ago in Amazing Spider-Man Annual #1 (1964), in a story appropriately titled “The Sinister Six!” Doctor Octopus gathers five other villains for revenge on Spider-Man, as you do. He forces the Wall-Crawler to fight them one by one, by using Aunt May and Peter Parker’s then-girlfriend Betty Brant as hostages.

(A running gag is that Peter’s doting aunt never realizes she’s been kidnapped, and admires that nice doctor despite his obvious deformity. Brant, however, has the good sense to be terrified of a madman with four metal tentacles.)

According to Marvel.com, “The Sinister Six!” falls between the stories in Amazing Spider-Man #16 and #17. It basically uses every major Spidey villain introduced to that point.

Well, with some exceptions. Dr. Doom showed up in issue #5, but he was just moonlighting from “Fantastic Four.” And Green Goblin, who debuted in issue #14, was a loner who was laser-focused on his own ambitions. The Lizard, who appeared in issue #6, was also excluded, probably because he literally lizard-brained at the time and might eat one of them.

Other villains in Spidey’s first 16 issues included The Tinkerer, The Chameleon, The Living Brain and The Enforcers. But who cares? They were all second-raters.

The original lineup, therefore, was Doctor Octopus, Electro, Kraven the Hunter, Mysterio, Sandman and The Vulture. If you’re a Spider-movie expert, you might note that all of those characters except Kraven have been introduced in one Spider-Man movie or another. And No Way Home features Doctor Octopus (Alfred Molina), Green Goblin (Willem Dafoe), Electro (Jamie Foxx), Lizard (Rhys Ifans) and Sandman (Thomas Haden Church) — all Spider-Man villains introduced before Amazing Spider-Man #17.

So we veteran comics fans can be forgiven for considering No Way Home a Sinister Six appearance. Even if Sony doesn’t admit it. OK, it’s a long story. But for a while Ock’s brain was in control, and in the very first issue of Superior Spider-Man, Otto Octavius (as Spider-Man) made mincemeat of the latest iteration of the Sinister Six. They weren’t exactly world-beaters to begin with, as they were comprised of the female version of The Beetle (insect-themed battle suit), Boomerang (trick boomerangs), the Living Brain (robot), Overdrive (mental control of engines), Shocker (mechanical shock devices) and Speed Demon (super-speed).

This Sinister Six was so hilariously lame that it was a hit, and was spun off into its own series, Superior Foes of Spider-Man. But since Living Brain didn’t make it out of that first battle — “Spider-Man” made off with it for scientific experiments — the entirety of the Superior Foes series featured only five members in its Sinister Six.

Which suited Fred “Boomerang” Myers just fine. “Did we not talk about the whole ‘air of mystery’ thing?,” he says. “People see us, they’ll just think ‘who’s the secret sixth guy,’ right? I mean, then it could be anybody! It could be Dormammu!”

To which Janice “Beetle” Lincoln replies, “That is genuinely the stupidest thing I have ever heard a real person say.”

So the Superior Foes weren’t exactly friends. In fact, Myers was constantly lying to the others and even tried to kill the none-too-bright Herman “Shocker” Schultz. But they were a team of convenience, who managed to steal the head of dead gangster Silvio “Silvermane” Manfredi, which was valuable. For reasons.

You can read the whole story, conveniently collected in the Superior Foes of Spider-Man omnibus. But I’ve read it already, so I’d love it if Marvel would adapt Foes into a Disney+ TV show. (Yes, I’m already casting it in my head.) 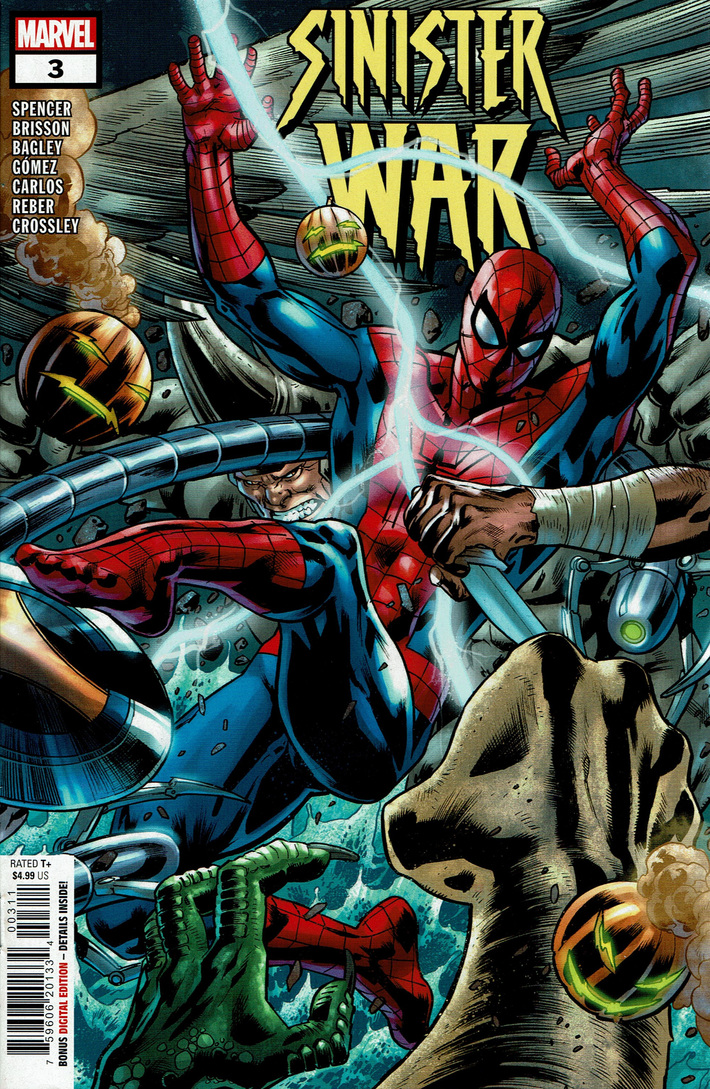 But that was, like, six years ago. The Sinister Six has made a more recent appearance, just months ago, which may be its most impressive to date. Well, at least numerically.

First, we had a traditional Sinister Six, comprised of Doctor Octopus, Electro, Kraven (actually a clone of the original), Lizard, Mysterio and Sandman. That’s the lineup from 1964, with Lizard subbing for Vulture.

That’s because Adrian “Vulture” Toomes wasn’t available. He was running his own sextet of villains, the animal-themed Savage Six, who also appeared in Sinister War. Check off Spidey villains King Cobra, Rhino, Scorpion, Stegron the Dinosaur Man, Tarantula and Vulture.

The Superior Foes Sinister Six also made a triumphant return … sort of. They still had only five members, including original members Boomerang, Overdrive, Shocker and Speed Demon. But Hydro-Man took the place of Beetle.

But that’s not all! Spider-Man has fought a lot of characters over the years, and Sinister War gave some lesser lights a chance to reappear.

For example, the “Wild Pack” consisted of Black Ant (the third Ant-Man), Chance, Foreigner, Jack O’Lantern, Slyde and Taskmaster. One of these was in Black Widow the movie; the rest are pretty obscure.

Then there was the Sinful Six, which consisted of Grey Gargoyle, Juggernaut, Living Laser, Morlun, Sin-Eater and Whirlwind. I’m not really sure what the “sin” theme is here, except that Sin-Eater was the leader. And outside of Morlun (a “devourer of totems”) and Sin-Eater, the rest of the team made their bones fighting other superheroes.

So why would these 36 villains, some of whom usually appear in other books, all attack Spider-Man at once? Because yet another Spider-villain named Kindred (actually synthetically grown super-beings Gabriel and Sarah Stacy), acting on instruction from Mephisto, had put centipedes in their ears. The centipedes would eat the villains’ brains, Kindred said, unless they killed Spider-Man.

They all became highly motivated.

Rest assured, however, that Spider-Man prevailed, no centipedes were injured (probably) and no brains were damaged. Unless you count the readers, who may have suffered cognitive decline from this convoluted storyline and confusion of characters.

So the next time the Sinister Six appears, let’s hope it’s just six bad guys (or even five) trying to wallop Spider-Man for nothing more than good, old-fashioned revenge. As Spider-Man: No Way Home shows, that story never gets old.

Being an O.G. Spidey fan, I have a soft spot for the original 1964 team. Steve Ditko produced some terrific full page battles between Spidey and each of the bad guys*. The best of these IMO are the ones of Sandman and Kraven (below). I even had Gayle make me a mug in her ceramics class with a pretty close version of the Sandman picture.

*This is like the way Bane wore down Batman before facing him. It would have been smarter of Doc Ock (who I think was hoping to face a worn-down Spidey) if more than one attacked him at a time. 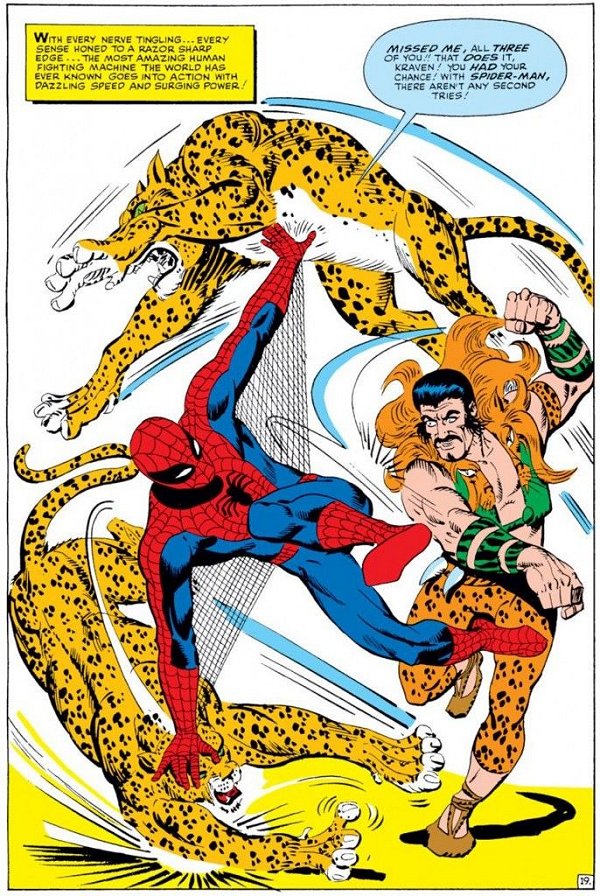 As I recall, the Vulture wanted to do just that, but the others all wanted the glory of defeating Spider-Man by themselves.

Also, there were a number of cameos in the book from the likes of Dr. Strange and the Human Torch, the latter of whom offered to assist Spider-Man but was turned down.

*This is like the way Bane wore down Batman before facing him. It would have been smarter of Doc Ock (who I think was hoping to face a worn-down Spidey) if more than one attacked him at a time.

Jeff of Earth-J replied to The Baron's discussion Movies I Have Seen Lately
"ANNIE: Another one we chose while flipping through the guide. When I was in high school we played a…"
1 hour ago

Jeff of Earth-J replied to Steve W's discussion A Cover a Day
"Father and son robot fighters:"
1 hour ago

Peter Wrexham replied to Steve W's discussion A Cover a Day
"Next, Dennis's cousin (their Mums are sisters) Minnie the Minx with her parents.  On the…"
1 hour ago

ClarkKent_DC replied to Cavaliere (moderator emeritus)'s discussion What are you watching right now?
"I've got George Carlin's Class Clown on vinyl. I used to play it incessantly. He actually…"
13 hours ago

ClarkKent_DC replied to Steve W's discussion A Cover a Day
"Yeah, but ... here on Earth-Prime, when they gave us the Smallville TV series, Ma and Pa Kent were…"
14 hours ago

Jeff of Earth-J replied to Jeff of Earth-J's discussion Swamp Thing
"Thanks for the link! I forgot to mention that #78 was guest-written by Bissette (and…"
14 hours ago

It's the day after Halloween in 1988 when four young friends accidentally stumble into an intense time war and find themselves inexplicably transported to th...
14 hours ago
0 Comments 0 Likes