The Superman Family: How Close is Too Close?

I posed this on the JLA-JSA thread, and am giving it its own post here at the Captain's suggestion:

"I can see a reading of the "Luma Lynai" scene from another direction.  Remember, Supergirl is the one who's messing about in Superman's love life a little before he utters the fateful words.  Maybe the writer-- Binder, I think-- was implying that Supergirl was "shipping" (as they call it now) her cousin through an intermediary.  If so, then Superman's words might be a way of diplomatically letting her down.

Not that there aren't lots of other weird incest-y motifs in the Superman Family.  Can we talk about the wedding of Jimmy and Lois?  Well, maybe on another thread."

It always seemed to me that the entire Superman Family was either falling in love, trying to get loved, trying to get married or avoiding getting married!

Makes you wonder how the Man of Steel found the time for any heroics!

It even affected his enemies! Both Luthor and Bizarro had wives! Even Brainiac had a couple of kids!

Wasn't there a married couple in the Phantom Zone?

Yes, Supergirl had some wacky suitors, but I think Jimmy tops her in that department. And Lois wasn't far behind! 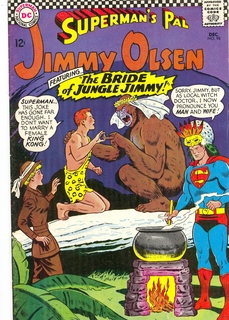 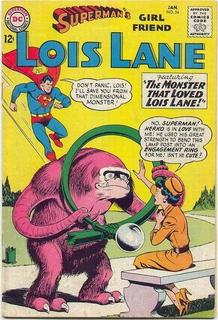 I meant to say "but I kind of like those comics."  I figure everyone could figure that out, but just to be safe.  :-)

A lot of people seem to hate the Weisinger era with all the craziness, but I kind of those comics.  To me they're a lot more fun than the current Superman comics - I'm not much of a fan of anything from Byrne's revamp on, to be honest.

Supergirl and Super Horse - hm, I'm not sure!  Depending on how the transformation works, the only problem I guess is for the poor bastard who has to follow that act!

I like the old comics better.  Heck, my favorite part of the latest movie was seeing the fragments of Wegthor hanging in the Kryptonian sky!

I've never made up my mind if the concept of a teenage girl with a pet horse who periodically morphs into a handsome man she can date is either the most brilliant idea for a comic presumably aimed at pre-teen girls, or the squinkiest idea ever aimed at anybody.

The Weisinger era Superman was the one I grew up with too, because even though it was before my time these were all the ones my dad had saved (he wasn't a collector, they were just kept in an old suitcase; he also had stuff like Sgt. Rock and G.I. Combat but it was mostly Superman). So it's partly nostalgia but partly I just think they were a lot more fun in those days.  I loved how Superman could just casually "pierce the time barrier" and visit the 30th century and that kind of thing.  The idea of Superman and of costumed heroes is inherently ridiculous, so why not have fun with it?

I love the Weisinger era! Mostly that's nostalgia, I'm sure -- it was the Superman I grew up with.

And in support of my thesis, I'll note that a recurring theme in Weisinger books was a threat to the status quo. Covers would showcase these unthinkable changes in the rules, and draw us in: Lois doesn't love Superman any more! Jimmy's marrying someone (or a gorilla)! Someone gets super-powers! Someone loses super-powers! Supergirl betrays Superman! Superman betrays Lois! Lois betrays everybody!

And, of course, at the end the status quo would reassert itself -- and reassure us little rugrats that here was one place where the rules would never change, and the whole family would be together and safe and unchanging forever.

Wasn't there a married couple in the Phantom Zone?

There was.  Doctor Xadu and his wife, Erndine.  They escaped from the Zone in Superboy # 100 (Oct., 1962) and set the Boy of Steel up for a deathtrap by posing as a mentally afflicted Jonathan and Martha Kent.  However, Superboy tumbled to their scheme and, instead, lured them to the planet Exon, which had a red sun.

Exon had no sentient life, but natural resources to provide food and water and shelter.  Superboy marooned Xadu and Erndine there to fend for themselves.

The Jimmy Olsen story I mentioned in the OP confirms what the Captain says.  Granting that Jimmy's younger at the time-- I think it was issue #15-- he acts like a very small child when a series of silly circumstances convince him that his best pal's girlfriend Lois wants to marry him.  He doesn't really seem to understand what marriage entails-- though in that he would be of a piece with *some* members of the target audience.

I really loved the mythology building in the Weisinger-era Super-verse, where a steady stream of fun ideas would be introduced and then developed throughout the various titles.  Admittedly, some of the ideas were more on the goofy side of fun, but there were enough of them that it usually worked out for the better.  Nowadays, between the increasingly frequent reboots, it seems like everything changes with each new creative team, and fun ideas like Lois & Clark being the adoptive parents of Zod's 10 year old son, which would have been good of decades of story ideas back in the "good old days" get brought in and tossed out in a story arc or two (more if you count "Chris Kent"'s return as Nightwing, having magically aged to be indistinguishable from Kon-El/Connor Kent, right down to the tactile telekinesis...)  Why even bother?

This reminds me of a recent question I had on another thread. I can't seem to find it, but the question was:

In the Kirk Alyn Superman serials there was something called "The Empty Doom" which was supposed to be an inspiration for The Phantom Zone. I haven't seen the Superman serials except in the form of clips. Does anyone who has seen them have thoughts on this. What do the two things have in common?

When I first watched Atom Man vs. Superman, I thought that Luthor's "Empty Doom" trap looked a lot more like the Phantom Zone I knew from the comics than the odd "CD cases" the represented the Phantom Zone in the Donner movies.  Basically, Lex had built an arch that could transport whoever was under it into a strange grey (sure, it's a black & white movie, but still, this seemed especially grey) emptiness, where they existed in a phantasmal state.

Thus setting things up for Jimmy Olsen level wackiness as Supergirl keeps trying to find ways to get out, horribly embarrasses the Man of Steel since she knows nothing about Earth culture, and him stuffing her back in until the next time the writer decided to have her sneak out and embarrass him.

But then Jimmy might have complained she was stealing his shtick. "But Supes, I was supposed to drink that and turn into a giant glow in the dark wombat in my sleep!"
Commander Benson said:

A regular non-super-powered one is bad enough, let alone one who could destroy a small mountain range every time she goes into a crying jag because the cute boy in math class won't give her a second look.

Cousin or not, I'd have zapped her into the bottled city faster than she could say "It's not fair!"

In the Silver Age, did they ever show Kara as a rebellious teenager, or would that have been considered a bad example for the readers?

No, she was never shown to be a rebellious teen-ager.  She was always properly obedient to her elder cousin.  But I was looking at it from a more realistic standpoint.  Even the best behaved teen-agers have their pain-in-the-ass moments---hormones and lack of maturity short-circuit their brains constantly.  And, yes, that goes for teen-age boys as well as girls, but if one is a male, the melodrama and overreactions of a teen girl seem worse.

Oh, yeah, if it'd been me, Kara would have been in Kandor as fast as I could teach her how to use a parachute.

She did show up in an awfully short skirt. And her mother made it like that on purpose for her first meeting with Superman? Tsk tsk. Good thing they turned out to be related, or she probably would have chased him around like Bat-Girl Betty Kane chased Robin. Lois would have absolutely hated her. I remember there was a story where he told her she could never reveal her existance, because he never knew when he might need her to be his ace in the hole, and she couldn't be if people knew about her. I've forgotten why she wanted to be known, but I believe she had to give up something she really wanted to stay a secret for him. Superman must have had severe self image problems at the time, thinking the most powerful being in the universe needed a secret helper. Or did he just like to mess with her, like he'd leave Jimmy in his Fortress of Solitude and hope he'd pick up or drink something or other so the Man of Steel could get a good laugh? Like when he convinced Lois he was Batman and Bruce Wayne was Superman. Hm. Maybe the Legion pulled those jokes on him because their records showed he was an incorrigible practical joker himself.

One thing I've always wondered is why Superman's name is Kal-El, just picking up his father's last name, while Supergirl's name was Kara-Zor-El, taking her father's entire name. Were Kryptonians sexist? Was Kara expected to change her name to her husband's full name if she ever got married?

The Kryptonian name thing wasn't always consistent, but it seems like married woman had no last name at all--Lara & Allura were never called "Lara-El or Allura Zor-El".  Oddly, I don't recall any of them being addressed as either "Mrs. El" or "Mrs. Jor-El", not that there ever seemed to be a Kryptonian honorific that didn't signify some sort of academic or military status (Doctor, Professor, General) rather than just gender (Mister, Miss) or marital status.

Richard Willis replied to Steve W's discussion A Cover a Day
"Was this one posted already?  "
1 hour ago

Richard Willis replied to Wandering Sensei: Moderator Man's discussion What Comic Books Have You Read Today?
"The Phantom Stranger stories are included. There are also a few appearances of Deadman in issues…"
2 hours ago

Rob Staeger (Grodd Mod) replied to Wandering Sensei: Moderator Man's discussion What Comic Books Have You Read Today?
"Actually, I just looked at the story itself, and it DOES start with the old man's suicide…"
2 hours ago

Jeff of Earth-J replied to Wandering Sensei: Moderator Man's discussion What Comic Books Have You Read Today?
"I think those tpbs are missing Forever People #9-10 as well, which are officially considered…"
5 hours ago

The Baron replied to Jeff of Earth-J's discussion Swamp Thing
"Yeah, 'cause we never break the flow of threads on this board!"
5 hours ago