The Teen Titans Project (2007): Changing of the Guard By 2007, the Teen Titans had been involved in DC’s company-wide story for about a year and half.  With Infinite Crisis now out of the way, the Titans were able to return to their own story.  However, that didn’t mean 2007 was any more settled than the previous years.  It also didn’t preclude the Titans from experiencing the occasional disruption from crossovers originating outside of the title.

The new year began with a single issue story focusing on newer Titan, Kid Devil (#42, Feb. ’07).  Guest artist Peter Snejberg drew the story, giving it the feel of a “Times Past” tale from Starman.  Regular writer Geoff Johns recounted Kid Devil’s origin, introducing us to a film studio gopher named Eddie who idolizes stuntman/superhero Blue Devil and eventually becomes his sidekick.  Johns also reveals a couple of secrets that add layers of depth behind Kid Devil’s sunny disposition.  For one thing, Eddie and the Blue Devil had a falling out and his daily phone calls to the big guy have been a charade.  For another, Eddie had made a bet with Neron for better powers but he lost the bet and will become Neron’s slave when he turns 21.  The Kid Devil spotlight was a solid story with several surprising turns and a strong friendship between Eddie and Zatara.  It wasn’t great, but it was a nice chance of pace.  It also helped solidify Kid Devil as a fully fleshed out Titan.

The first big story of the year featured the new Teen Titans East.  The Titans had toyed around with an east-west rivalry since the 1970s but Johns added a couple of twists.  First, Johns’ Titans were headquartered in San Francisco making the west squad the main team (a concept borrowed from the Teen Titans cartoon).  Second, and more significantly, Johns crafted the east squad as antagonists instead of substitutes.  Deathstroke gathered a team of dissatisfied, deluded and dangerous teens to take down the Titans.  The team was chosen for their contrasting powers or maximum emotional impact: the Cassandra Cain Batgirl, the Crusader (previously seen in a Titans’ recruiting drive), Inertia (who pretended to be a resurrected Bart Allen), the Joker’s Daughter, Match (a Bizarro version of Superboy), the Riddler’s Daughter, Risk (a former Titan) and Sun Girl. The running battle between the two teams lasted four issues (#43-#46, Mar.-June ’07).  There were cool one-on-one battles: Ravager vs. Batgirl, Robin vs. Deathstroke, and an emotionally distraught Wonder Girl vs. Match.  The new Titans were tested with new rivals: Kid Devil vs. The Crusader and Miss Martian vs. Sun Girl.  There were great twists along the way, such as Batgirl shaking off her programming and joining the heroes against Deathstroke.  There were memorable covers, including an homage to the classic two-teams-rushing-at-each-other pose.  There bold strokes, such as Tim’s decision to reject Deathstroke’s terms for the battle and call in every ally he could for an all-out assault.  It all built up to a big family showdown as Deathstroke took on his children, Jericho and Ravager.  There was even an extra twist at the end.  After escaping the final battle, Slade Wilson revealed that he achieved his goal despite his defeat- he was now satisfied the Titans would treat and protect his children as their own.

The main thing that kept “Teen Titans East” from becoming an all-time great story is that it turned out to be a transitional arc.  The creative team of Geoff Johns and Tony Daniel departed halfway through the epic, replaced by Adam Beechen and Al Barrionuevo.  Barrionuevo was less polished than Daniel.  Plus, despite using less detail, he was paired with a heavy inker, going by the single name of Bit.  The result was like a bad coloring book.  Adam Beechen is a good writer but the drop-off from Johns was noticeable as well.  Beechen’s dialogue didn’t capture the same emotional nuance and depth- not entirely surprising for a new writer, but still disappointing.  The result was that the ending of “Teen Titans East” wasn’t as good as the beginning. Issue #47 (July ’07) was a coda to the “Teen Titans East” epic.  It was also a sign that the larger DC Universe was about to intrude on the series again.  The main story concerned Jericho, who had possessed Match’s body during the previous fight.  However, Jericho couldn’t let go of Match or the Titans would be forced to fight the Bizarro-Superboy yet again.  The decision to keep Match contained took Jericho out of the Titans (and temporarily out of the title).  In two smaller stories, the Titans dealt with ramifications from the broader DCU.  They attended a funeral for Duela Dent, the Joker’s Daughter, who had been killed in the pages of Countdown.  Plus, Nightwing and Robin squared off with current Red Hood and former Robin, Jason Todd.  I enjoyed Chris Batista as a guest penciller but the story itself- Beechen’s first solo tale after previously scripting over Johns’ plots- struck me as a little light.

Next up, the Titans became embroiled in the “Amazons Attack” crossover, spilling out of Wonder Woman (#48-49, Aug.-Sept. ’07).  It is possible to craft a good tie-in story for a crappy crossover- and make no mistake: “Amazons Attack” was an awful story- but that didn’t happen here.  Beechen’s tie-in was riddled with the same clumsy characterization and ham-handed motivation that plagued the main tale.  As the worst example, Supergirl and Wonder Girl decided to attack Air Force One and kidnap the president to force peace talks.  Yeah, that happened but I think we can all agree to pretend it didn’t. However, there were a couple of silver linings attached to the dark cloud of Amazons Attack.  For one thing, Supergirl joined the Titans (or re-joined, I’m not sure if this is the same Supergirl who was part of the Arsenal-led team in the ‘90s).  For another, Wonder Girl received her own mini-series (Wonder Girl #1-6, Nov. ’07-Apr. ’08).  Written by J. Torres and drawn by Sanfored Greene, it was a light-hearted adventure romp co-starring Hercules, and Cassie’s former Young Justice teammates Arrowett and Empress against the Female Furies of Apokolips.  Greene’s depiction of the teenaged Cassie was a little too sexualized at the outset but the art became more age-appropriate as the series progressed.  J. Torres scripted a quick, fun story that’s worth reading.  It was also a sign that the Titans were starting to flex their muscles as a franchise again, despite the creative changes on the main title.

Speaking of the main title, the extra-sized anniversary issue #50 (Oct. ’07) welcomed a new creative team as well as several old ones.  Sean McKeever started his stint as the Titans’ regular writer with a story drawn by Randy Green in which Robin tried to settle on a new line-up of Titans.  The older Titans begged off due to other various commitments (Beast Boy, for example, had rejoined the Doom Patrol) so, for the first time, the Teen Titans were comprised entirely of the younger generation: Kid Devil, Miss Martian, Ravager, Robin, Supergirl, Wonder Girl, and, finally, as a part-time ally and teammate, the new Blue Beetle.

Meanwhile, classic creative teams Geoff Johns & Mike McKone, Marv Wolfman & George Perez, and Todd DeZago & Todd Nauck provided flashback tales focusing on the Flashes.  Johns and McKone presented a fun little tale with Bart Allen as Kid Flash learning to fly the Batplane.  Wolfman and Perez told a story in which Wally West wrote a letter to his mentor, Barry Allen, about his experiences with Titans.  It was a nice shout-out to the classic New Teen Titans #20 (1982) which also used a letter from Wally to his parents as a storytelling device.  Finally, DeZago and Nauck provided a quick Young Justice tale about Bart’s foibles as Impulse.

Looking back, it was a great anniversary issue, nodding to the past while pointing to the future.   It was also my last issue as a regular reader.  I loved the Johns-McKone era but had grown tired of the frequent shifts in the creative team.  I also found each successive team to be a step down.  The anniversary issue- with its fun flashback tales- helped me realize that I didn’t enjoy the Titans as much as I used to.  I was also in the midst of interviewing for a new job and then moving across the continent and I lost track of several titles around this time.  However, I didn’t quit the Teen Titans entirely.  I would continue to keep abreast of the series and pick up sporadic issues (and eventually fill in the gaps for this project). 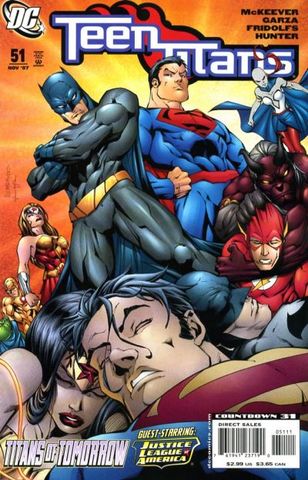 Sean McKeever closed out the year with an epic of his own- “The Titans of Tomorrow” (#51-54, Nov. ’07-Feb. ’08).  It was a definite nod to the excellent “Titans Tomorrow” story from Johns and McKone’s second year on the title (2005).  McKeever brought the villainous future Titans into the present as the current Titans went into battle against Starro the Conqueror.  The current team wrestled again with their fears that they would turn evil, while the future team pestered and hindered them in their fight against Starro.  McKeever expanded nicely on Johns’ earlier story and themes, introducing evil versions of Miss Martian and Kid Devil that played off of their own fears about the evil within.  It was a powerful story with riveting moments.  I was especially impressed with the eye-catching designs for the future Miss Martian and Kid Devil.

The series did have a little trouble settling on an artist as Ale Garza (#51) and Jamal Igle (#52) took turns before Eddy Barrows came aboard as the new full-time guy (#53-54).  However, Garza, Igle and Barrows are all solid, competent professionals.  Each provided a memorable scene or two and the artistic shifts weren’t as disruptive as they could have been.  Barrows had recently been one of the rotating artists on 52 and he was adept at handling epic stories and a large cast.  He was a good fit on the title and a good partner for McKeever. In retrospect, I didn’t give incoming writer Sean McKeever much of a chance.  I had been burned by Beechen and jumped ship before seeing what McKeever could do.  But McKeever’s first full arc was amazing- even better than the Johns future-Titans story that inspired it.  It had strong characterization, a tight yet twisting plot and epic action.  It’s everything I want in the Titans, and I feel a little bad about missing it when it first came out.

In any case, 2007 marked the changing of the guard for the Titans both for the line-up as the last of the adult Titans departed and for the creative team as Johns and Daniel made way for Beechen and Barrionuevo and then McKeever and Barrows.

And don't forget to check out my previous articles about the Teen Titans in 2005 and 2006: Infinite Crisis and One Year Later

You know, reading this entry reminds me of how much I regret that DC, even more than Marvel, became so reliant on events and crossovers.

Amidst all the noise and the deluge of challenges to follow the full storylines or miss them, there are some nice stories being published.  It is too bad that I would rather not be blackmailed into hunting for them among so many expensive titles subject to so much editorial interference.

Too many characters on the covers.