I haven't seen these in about 40 years, so, effectively, I'm seeing them as for the first time.

Yeah, even if his name wasn't on it, you'd guess this was an Irwin Allen show about a minute into it.

Whit Bissell as the General. Always good to see our Whit.

Cripes, they've got Altair IV down there! And they're gonna shut this huge place down, just because one senator says so?

I'd forgotten that Tony went back alone first.

Fun facts: Anthony Newman was born in 1938, and is from the year 1968. so, the show was set two years in what was then the future.

Andrew was right - Newman immediately tries to change history. "We're Americans, by God! None of this 'worrying about damaging the web of time' for us!"

The great Michael Rennie as the Captain of the Titanic.

Well, the special effects are alot better than Doctor Who of the same time period, and they haven't aged too badly.

Interesting that out of all of human history, they land someplace historically significant on their first try.

All in all, I enjoyed this alot. The disk set has an unaired expanded version of the pilot, I shall take a look at that next, to see what they left out of the aired version. Doug and Tony seem like reasonably likable 60's Americans TV heroes so far.

One wonders what the plan was for using the time tunnel once it was perfected - historical and archaeological research, of course - and perhaps a little judicious nudging of world history into directions more favorable to the USA? Hmmm?

I love a good sword fight.

And the timestick arrives where they were...

I like villains that are evil, just 'cause they're evil - old-school, cackling "I'll show them who's in charge here" baddies.

I knew she was a rat, instantly - the actress overplayed it a touch.

"What is it?" "Horses! King's men!" "They've come to put Humpty Dumpty back together again!"

"Phosphine oxide" "Just a little home-made nerve gas." Note to self: Do not get Doug mad at me.

I love the way Doug looks at Tuck, when Tuck hits the guy with his belly.

I also like how Doug and Tony are obviously getting a kick out of witnessing the signing of the Magna Carta.

And they disappear while still wearing their period clothes again.

Hey, it's one of the huts from Gilligan's Island! Man, if one of the Japanese ends up being played by Vito Scotti, that would kick @$$!

Another fun episode - it butchers history, but by this point, I'm not worrying so much about it.

Doug gets caught by a guy with a stick...

That's not exactly kendo, but close enough, I guess, with the materials they have at hand.

I think this is the angriest we've seen Doug.

I half expect to see Rory Calhoun come through, chasing Bob Denver.

So, some guy from the Japanese Consulate gets to see the Time Tunnel? The list of people that know abouit this is lengthening...

Sure, make the guy's dad watch this...

Great, the last grenade is a dud!

No Vito Scotti, but otherwise an OK episode, with some nice interplay between the various characters.

Permalink Reply by Jeff of Earth-J on October 13, 2009 at 9:26am
Did Michael Ansara ever guest star on The Rifleman? I think I saw him on The Rifleman.

Speaking of that eleventh impossible thing you’re expected to believe before breakfast, try Googling HAL’s Legacy: 2001’s Computer as Dream and Reality. We may be closer to a “universal translator” than you think (certainly closer than we are to time travel). It's been a while since I read it, but it's a fascinating book.

Another interesting analysis, Commander. I think Bob’s right: we seem to be putting a lot more though into the mechanics of the show than its writers seemed to!

The Death Trap: Many of the comic book stories seemed to be loosely based around people and events already covered in the television series: Abraham Lincoln, General Custer, mission to Mars, etc. They’re not strict adaptations, but you’d thing Tony and Doug would have commented, “What, again!?”

I’m looking forward to the next episode (The Alamo), but we’ll be out of town for the next several days and won’t get to it until this weekend at the earliest.

Permalink Reply by Commander Benson on October 13, 2009 at 11:20am
"Did Michael Ansara ever guest star on The Rifleman? I think I saw him on The Rifleman."


Good eye, Jeff. Michael Ansara guest-starred on The Rifleman twice, in the 17 February 1959 episode "The Indian" and in the 09 June 1959 episode "The Raid". Both times he played U.S. Marshal Sam Buckhart. They were back-door pilots for Ansara's show The Law of the Plainsman.


I haven't caught up with those episodes yet, Baron, so I withhold comment until I do. However, I had to insert a sidebar here, at your mention of Mako.

I had the good fortune of meeting the man and spending a few days with him. It's a long story that comes dangerously close to sounding like I am self-aggrandising---I'll minimise both as best I can.

First, I've always enjoyed Mako's performances, whether as a good guy or a bad guy or somewhere in between. Besides his acting skill, he had that charisma that just makes you want to watch him.

As for how I got to spend time with him, to explain that I have to admit to the fact that I am good friends, very good friends, with the actress Angel Tompkins (regular supporting character on the 1973 programme Search, and veteran of a host of movies---a couple of A's, mostly B's, and a few grade C, D, and Z stinkers in there, too). How that happened is another 'way-too-long story, but back in '03 she was invited to attend one of those film and television conventions being held in Asheville, North Carolina, which is about two hours from where I live.

Since we live on opposite sides of the country, we rarely get a chance to see each other in person, so when Angel got the invitation, she insisted to the convention promoters that I be given V.I.P. status and permitted to mingle with her and the other invitees, especially during the activities planned just for them. The other guests were Kathy Garver, BarBara Luna, Don Pedro Colley, Ruth Buzzi, Anne Lockhart---and Mako.

Feeling quite self-conscious at that status, I tried to remain invisible to most of the group, spending my time with Angel. But of course, when the convention got into full swing, I couldn't monopolise her time---she had to see to the paying attendees. So during that time, I tried to make myself useful to the promoters by doing some of the grunt work, or by just staying out of the way. During one of those times when I was trying to stay out of the way, I was sitting off to one side when I happened to overhear a discussion between Mako and Don Pedro Colley. One of them was trying to recall some bit of movie minutia, the name of an actor or some such thing. I knew the answer and couldn't resist offering it, and that brought me into the conversation. The next thing I knew, I was part of the group as a whole.

(I've had much success getting to know people in that industry; I insist it's not because I'm likeable---that's debatable---but because [1] I don't want anything from them; and [2] believe me, as much as I've seen of Los Angeles and its denizens, I'm probably one of the few normal people they ever meet.)

Talking to Mako over those three days, I can tell you, whenever you saw him play a good guy in a show (such as when he played private eye Tami Okada on Mannix), that was his own personality: engaging, personable, and a dry wit. There was one instance I'll never forget. The group of "stars" was being treated to lunch during their tour of Biltmore House. Being North Carolina, the menu was heavy on barbecue, and Mako ordered the barbecued spare ribs.

When the waiter returned with our orders, he sets this heaping plate of ribs, swimming in barbecue sauce, in front of Mako. Without missing a beat, and looking a serious as a judge, Mako looks at the waiter and asks:

"Do you have any chopsticks?"


And for the record, for those reading this who are interested in such things:

Kathy Garver---intelligent, friendly, a natural personality who didn't have to be "on" for the attendees when they approached her

BarBara Luna---a surprise; incredibly nice and open to conversation, nothing at all like the brittleness of most of the characters she plays

Ruth Buzzi---I never thought she was that funny on Laugh-In or anything else on television, but she is fantastically funny in person and had me---and everyone else---in stitches

Don Pedro Colley---probably best known for his rôle as one of mutants in Beneath the Planet of the Apes; this man is a true polymath, incredibly knowledgeable in many fields and very well spoken. I had the best conversations with him.

Anne Lockhart---she was polite and nice to everyone, but it had the feel of a stage personality; I got the impression that she would rather have been any place else. But then the event might have caught her on a bad week.


I now return you to the Time Tunnel discussion, already in progress.

Permalink Reply by The Baron on October 13, 2009 at 1:44pm
Angel Tompkins..if it's the person I'm thinking of, I'm sure I must've seen her in a dozen things on TV over the years. She also had a small part in a favorite picture of mine, Amazon Women on the Moon, possibly not a picture she would list at the top of her curriculum vitae, but one that I've always found quite amusing.

Angel Tompkins..if it's the person I'm thinking of, I'm sure I must've seen her in a dozen things on TV over the years. She also had a small part in a favorite picture of mine, Amazon Women on the Moon, possibly not a picture she would list at the top of her curriculum vitae, but one that I've always found quite amusing.

Yep, that's her. And she rather got a kick out of doing that bit in Amazon Women on the Moon.

Anyway, here she is when I first ever heard of Angel Tompkins---from her time on Search 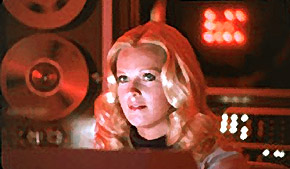 This is pretty much the way she looked the first time I met her in person, back in '97: 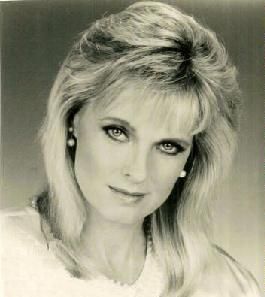 And this is her now: 
It was your mention of "U.S. Marshal Sam Bucktoe" that sparked my memory. I knew that wasn't the name of the character he played on The Rifleman, but it was close enough to remind me of the show I was thinking of. Thanks!