In the 1940s and ‘50s, many preachers, parents and politicians railed against comic books as the cause of juvenile delinquency, tossing around phrases like “seduction of the innocent” and “horror in the nursery.” Thanks to a new book, I finally agree with them. I have now read comic book stories that are more horrible than any horror comics, more disturbing than any adventure stories.

The source of this plague? Romance comics. 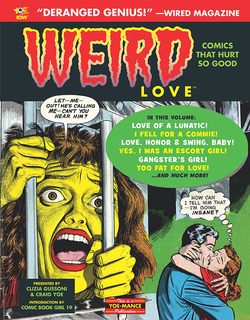 Created (more or less) by Joe Simon and Jack Kirby with Young Romance #1 (1947), romance comics were aimed at girls, but more than a few boys bought them, too. (Cynics suggest one reason boys bought romance comics was for the so-called “lingerie shots,” in which young women were depicted bathing, dressing, undressing, etc., while tearfully fretting over their latest romantic obstacle. That was pretty racy in the ‘40s and ‘50s, I suppose.) Young Romance #1 sold an astounding 92 percent of its press run, and romance comics were some of the best-selling comics in America in the early 1950s.

Some of these romance comics were pretty good, especially those at Crestwood’s Prize Publications and St. John Publishing, depicting more or less realistic problems, and strong-minded women with the agency to solve them. But a great many of them were astonishingly bad, with some of the stupidest women (and men) ever depicted in fiction. Worse, in many of them the moral of the story was for the woman to give up all independence and simply do what she’s told by a man. In mindless servitude, the story fairly shouts, lies happiness.

Worse still are the ones that attempted real-world romantic complications – like insanity or drug addiction – and come off so cartoonish that it’s clear the writers had no clear understanding of those issues. Or stories where clueless, middle-aged, male writers would attempt to depict “rock and roll” teens of the 1950s, hippies of the ‘60s and women’s libbers of the ‘70s. These stories are so dehumanizing, I submit, that they represent the true horror comics of their times.

As evidence, I need only present“Weird Love Vol. 1 (IDW, $29.99), collected by Clizia Gussoni and Craig Yoe. Yoe has made a career out of reprinting public domain comics, mostly horror books, but with Weird Love he has hit the motherlode.

Subtitled You Know You Want It!, the book offers such non-universal tales as “I Fell for a Commie!”, “Love of a Lunatic!”, “You Also Snore, Darling!” and “Yes, I Was an Escort Girl!” Laughably bad stories address free love with “Love, Honor and Swing, Baby!”, or ask whether a girl can be “Too Fat for Love!” Can love survive if your girl is your boss and whispers those three little words, “You’re Fired, Darling!”?  And “Weep, Clown, Weep!” addresses the classic dilemma of a girl disapproving of her beau’s profession, which in this case involves rubber noses and floppy shoes.

American parents should be aware of the threats these stories present to our young girls (and lingerie-loving boys)! Every home should have a copy of Weird Love. Not only are its lessons invaluable for today’s complicated world, but let’s face facts: You know you want it.

One corrective for Weird Love might be a book with the unlikely title Rat Queens. Set in a sword-and-sorcery milieu familiar to readers of Conan the Barbarian, the girls of the title are four mercenaries for hire against threats both mundane and mystic. In a sort of cross between Lena Dunham’s Girls and Dungeons and Dragons, the four are not only best friends but also fantasy archetypes: One is a human cleric with a Lovecraftian background; another an elven mage; a third a beard-growing, sort-of dwarf; and the fourth is a Hobbit-like “Smidgen.” Their mix of combat styles and tools make them the most formidable force in the city of Palisade, which is chockablock with other mercenary groups, such as The Daves (all of them are named Dave) and The Peaches (they all wear peach). 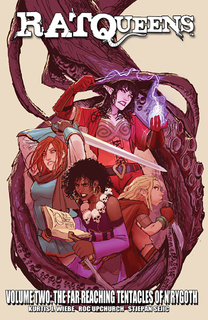 But, while the adventuring and goblin-slaying and whatnot is a lot of fun, the real selling point of Rat Queens are the personalities of the four. Each is distinct and three-dimensional, with specific and relatable backgrounds. One, for example, has rejected the religion of her cult-like tribe. Another runs away from home because she’s expected to act girly and take a back seat to her brother. All of these damaged creatures find acceptance with each other that they couldn’t find at home. It’s grrrl-power, of course, but it’s also as realistic as those four girls you knew who hung out behind the gym together in high school.

Another plus is the Queens all have realistic body types. None are unattractive by any means, but you’re not going to see the pneumatic pin-up queens you see in a lot of other comics, nor are you going to be subjected to gratuitous T&A shots. These girls wake up with bad hair; they belch and pass gas; they act badly when they’re drunk. They live a naturalistic Medieval lifestyle, which isn’t often pretty or hygienic (but is often funny).

Speaking of realism, this book ain’t for the kids. The Queens engage in unrestrained, casual sex; they guzzle booze and drugs shamelessly; they curse worse than sailors; they work out their frustrations by slicing up bad guys. They are also a pretty diverse group – one is gay, another black, a third has horns and there are many, many tattoos. It’s like a Millennial party, except for the horns. (Well, maybe.)

This collection comprises material from the first six issues on the bimonthly Weird Love comic book (plus one additional story, IIRC). I love Yoe’s anthology comics Weird Love and Haunted Horror, but wanted to point out you don’t have to spring for the $30 HC right off the bat if you don’t want to.

The Weird Love and Haunted Horror comic books are both published bimonthly, but they’re staggered so you get a healthy dose of cheesy pre- and post-code horror or romance every month. These are among the best-selling comics on Earth-J. I recommend them for your Earth as well.

On my world, comics are made of pizza. After you read them, you eat them. Then in the morning, like Thor's goats, they're whole and ready to go again.

I'm partial to Last Kiss, the sporadically published spoof of romance comics published by comics writer John Lustig. He bought the rights to Charlton's First Kiss at a fire sale, and puts new, goofy dialogue on the art.

...Thank you for confirming that they add one " bonus story " , Jeff --- Though I like both WL and Craig's other " Horrifying Horror "-type " Fifties " reprint title , I stopped buying both the funnybooks of those when that marketing plan became apparent .

Perhaps I will buy both the book collections one day . Perhaps .

Do you think a " cool " - or rather odd - library might accession both books ?

JD DeLuzio replied to Steve W's discussion A Cover a Day
"Another great "Kids and Gothic Tropes" cover:"
3 hours ago

Randy Jackson replied to Randy Jackson's discussion League of Extraordinary Gentlemen reboot
"They could throw out everything from that lousy movie. Such a disappointment, and a departure from…"
3 hours ago

Richard Willis replied to Randy Jackson's discussion League of Extraordinary Gentlemen reboot
"Presumably, the first thing that will differ would be no Tom Sawyer, unless he's 80-plus years…"
11 hours ago

Richard Willis replied to Jeff of Earth-J's discussion Swamp Thing
"This story arc (25-27) was very impressive. I was never a big fan of Etrigan but he works well as a…"
11 hours ago

The Baron replied to The Baron's discussion Pro Wrestling
"I don't know that it's been confirmed anywhere."
18 hours ago

Philip Portelli replied to The Baron's discussion Pro Wrestling
"Which would be odd since Steamboat had health issues during his last run with WWE."
19 hours ago