The Unwritten: Tommy Taylor and the Ship That Sank Twice 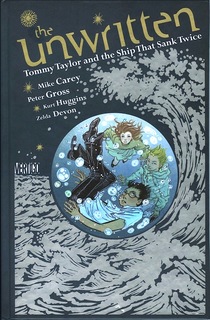 The Unwritten: Tommy Taylor and the Ship That Sank Twice

This is Tommy Taylor's origin story, which Vertigo describes as a prequel to the series The Unwritten. It came out over a year ago, but just came out in paperback, so I'm catching up to it in a somewhat timely way. Technically it really is a prequel: it tells the story of how writer Wilson Taylor hatched a master plan to conceive a son and a literary character simultaneously. This has been hinted at and revealed in bits and pieces in the main series, but the whole thing is laid out here. Parallel stories depict the adventures of child wizard Tommy Taylor (in Wilson Taylor's first book Tommy Taylor and the Ship That Sank Twice) and the birth and early childhood of Tom Taylor, including the family's role in the marketing of the series of books that became an immediate sensation.

The story opens with Wilson trying out approaches to the series. He understands the power of literary templates, and sets out deliberately to tap into the "boy wizard" archetype that has been popular in recent stories (hard to avoid thinking of Harry Potter here, but Taylor mentions Narnia, Lord of the Rings, Superman, and "all their bastard offspring.") Wilson meets with a publisher when he has some finished chapters. He's convinced that his story can attract a far broader audience than the niche fantasy market.

The completed chapters at this point have already set up the core of the boy wizard story. His parents, wizards Sebastian and Leona Taylor, have set their infant child adrift to save him from a shipwreck. He arrives on land safely via the giant whale Leviathan, and is placed in the care of the master of the Tulkinghorn Magic Academy. Tommy grows up working in the kitchen, unaware of his background. But when the ancient vampire Count Ambrosio arrives--after the wizards have raised the ship that sank with the Taylors aboard--who he is becomes the key not only to his destiny, but to the salvation of the town and the entire magical community.

Meanwhile Wilson has sent Tom's mother away (complete with a separation agreement that bars her from seeing him again) and taken up with the boy's governess. He knows what he's doing to his son is monstrous, and can only hope for understanding (and perhaps forgiveness) one day. Which does not stop him from using the boy to promote the books, right from early infancy.

So all of the questions about Tommy's parentage and early life are definitively answered. But the bulk of the story is the part telling the fictional origin of the boy wizard. It's far more entertaining. But at the very end the appearance of the winged cat Mingus calls the division between fiction and reality into question.

Finally, a word about the art. Co-Creator Peter Gross is credited with Layouts for the whole book. He and six other artists did finishes, and five artists get credit for colors. Sounds like it could be a visual patchwork, but in fact it looks quite consistent. Judging by the sample process page in the back, Gross's layouts were detailed enough to guide the storytelling despite the many hands involved.