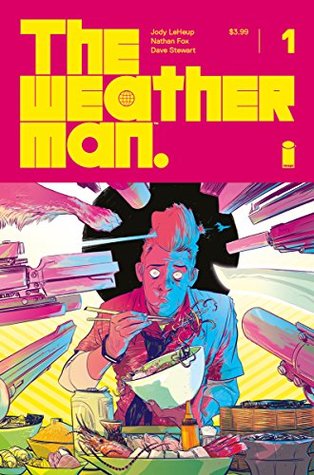 The year is 2770, and Nathan Bright is the titular weatherman. He is a huge television star on terraformed Mars, beloved for his outrageous behavior and irreverent attitude. The Martian citizens need the diversion, because they have a lot to forget: a terrorist attack has wiped out nearly the entire population of the Earth, which leaves almost everyone in mourning. While on a second date with his "girlfriend" Amanda everything changes. He finds himself under an armed attack, with a second armed force (including Amanda) defending him. They survive the attack, but then Amanda points a gun at his head and informs him "You're under arrest for the murder of eighteen billion men, women and children."

Turns out that both groups are convinced that Nathan is really the U.S. soldier/mercenary Ian Black. Black supplied the terrorist group Sword of God with the weapon used to destroy Earth, then had most of his memories removed by a fringe neuroscientist who had developed an experimental procedure that allowed her to remove and replace memories. The Martian security forces Amanda represents want to get Nathan's memories restored so he can help prevent the destruction of the rest of humanity promised by the Sword. The other side is just looking at the money to be made by taking public revenge on him.

And the chase is on, a breathless nonstop action romp very reminiscent of Rick Remender's science fiction series Black Science and Low.  This opening arc concludes with a return to the scene of the crime: Nathan sees the Earth through a spaceship window. The collection also includes a large set of alternate covers by Marcos Martín (who contributed several) and others.

It's a strong start for the series, although I wonder if the nonstop action can continue. Fox's art is wonderfully kinetic, and he excels at expressive facial expressions. Stewart's coloring is bold, avoiding the drab palette sometimes found in a story like this.