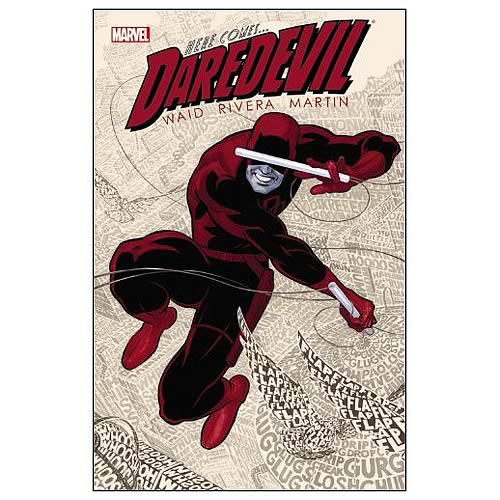 When a hero has been around for 50 years, there are bound to be various interpretations.  When I started reading Daredevil in the late 70s / early 80s, Frank Miller was first the artist and later the writer and artist on the title.  He put a stamp on the character that resonates to this day.  It did so well then that the title was boosted from bi-monthly to monthly status.  It was great storytelling, but upbeat it was not.

Many creators have emulated Miller's approach while telling their own stories.  But it often feels like there are no happy endings for Matt Murdock and any love interest is a dead woman walking.  The series that kicked off in 2011 strived to be different.  Writer Mark Waid wanted to give readers a Daredevil that "doesn't drive you to drink afterwards".  Safe to say he, along with artists Paolo Rivera, Marcos Martin, Chris Samnee, and the other creators who have worked on this title have succeeded.  Not only is this one of Marvel's best and highly entertaining series, Waid and company deliver a Daredevil with humor and fun, while staying true to the character.

We will be discussing Volume 1, which encompasses #1-6 of this series.  Let's begin!

Mark Waid's pitch for this series, from the letter column of Daredevil #1:

My read on Daredevil is that - mostly as a mental survival skill thanks to all the personal hells he endured - he's the only Marvel hero who lives totally in the moment.

He doesn't worry about what happens next, nor does he allow himself to be haunted unendingly by his past.  He's been through enough agony to have confidence nothing will break him and (more importantly) that no pain lasts forever.

He's the Man Without Fear not just because he'll dive off a skyscraper, but because he genuinely believes after all he's been through, there's nothing unimaginable left.

Nothing out there that could frighten him that he hasn't already weathered.  And he's right.

Daredevil #1 begins with a nice little recap of DD's origin.  A good feature, as any #1 issue will be someone's intro to the character.  The story opens with DD crashing a mob wedding, because he's heard a rumor there was going to be a hit.  Instead, it's a kidnapping attempt by old Spider-foe, the Spot.  During this sequence we see a full range of Matt's powers on display.  A tip of the hat to Waid and Rivera for being imaginative with DD's radar sense.  All too often over the years it's been portrayed as just a substitute for actual sight, working the same way.  The way Matt "sees" is vastly different from the rest of us.  His other senses aren't just slightly enhanced, they are enhanced to an incredible degree - smell, touch, and hearing all used cleverly here.  DD saves the day and takes his reward, a deep kiss from the blushing bride, signalling from the outset this will be a fun series.  Fun is not a word usually associated with Daredevil, but it's a breath of fresh air as far as I'm concerned.

From there, we move on to Waid addressing Matt being publicly outed as DD in the Bendis era.  Matt states it was just a blip in the 24 hour news cycle and now everyone has moved on to other things. Waid's solution seems like a good one but the reader soon realizes Matt is just trying to convince himself the problem has gone away.  The coffee vendor thinks he's DD, other lawyers think he's DD.  The new Assistant D.A. thinks he's DD and as she says "My nephew knows it, and he still believes in Santa".  The general public seems OK with it, but it presents a problem in court.  Matt is representing a man named Mr. Jobrani, who says he was the victim of police brutality, and Matt states the guy is telling the truth and has conclusive evidence to back it up.  "A straight-up cakewalk", in Matt's words, except the opposing lawyer makes the case all about Matt being DD.  It's going so badly that the judge grants a continuance that Matt and Fogey didn't even request.  They pledge to their client they will make it right.  Matt learns from Assistant D.A. Kirsten McDuffie that no other lawyer in town would take Mr. Jobrani's case, despite it being a solid one.  He decides to find out why.

In a beautiful sequence, Matt leaps off the rooftop and changes to DD in mid-air, throwing his clothes into his office window.  He's off to investigate but detects a figure in the distance.  A gun is fired, and confetti falls all around Matt.  His radar sense is totally disrupted.  He knows this will be followed by something, and it is.  Heading for his head is Captain America's shield!

There's a backup story in issue #1 by Waid and artist Marcos Martin.  I'll give it it's own post later.

A great little story with a good cliffhanger.  To see Matt Murdock with a sly sense of humor is wonderful.  Foggy Nelson and the other supporting players are fleshed out quite well.  The Assistant D.A. makes a nice addition to the cast, she has no time for Matt's "I'm not DD" ruse but she isn't going to make his life miserable over it either.  Will she be a new love interest?  Wait and see.

What can you say about the art?  It's lush, detailed, and vibrant.  Kudos to the colorist too, as this reader is sick to death of murky.  The sequence with the Spot, DD kissing the mob bride, and Matt's mid-air change to DD are all brilliant.

So what do the rest of you think? I haven't read a new DD tale in ages but after reading these posts I'm intrigued enough to contemplate giving Waid's DD a try next time I pick up any TPBs.

So what do the rest of you think?

What do I think? I missed the first issue of this series and have been kicking myself ever since, that's what I think!

A couple years ago now, Mark Waid did a signing at my LCS. This hardback was the book I took to have him sign. This is the beginning of the next great run on Daredevil--a successor to Frank Miller's run, if you ask me.

...A question about Matt Murdock's parentage (given that I have bought , and reasonably liked ~ Didn't I say that here ? ~ the latest #1) ~ So , Matt's biological mother was a woman who , after giving birth to Matt , became a nun , who is now the Mother Superior of a nunnery (Absolutely grammatically , it is correct to refer to the home of an all-female monastic order as a " monastery " , I believe , but anyway .) in Hell's Kitchen ?

Wikipedia , the last time I looked , did not cover this/have a " fictional character " biography of Matt .

No idea about Matt's mother, ED.  She isn't mentioned in this collection and I think Kevin Smith was the last creator to use her in a story.  That would be about 15 years ago.

I read very, very little of the dark era of Daredevil, so when this storyline came around, I jumped on it, and I adored it. I was a reader of horn head for the first time in my 30+ years of collecting comics

Permalink Reply by Randy Jackson on April 14, 2014 at 1:46pm
It's so nice to see a Daredevil comic that isn't just endlessly rehashing Miller's beats. Over the last 20 years, that's pretty much what we've gotten from the title.

I mentioned before that there was a bonus tale in Daredevil #1.  It was written by Waid, with art by Marcos Martin.  We take a journey from the law offices of Nelson & Murdock through the streets of New York, with a detour to the subway levels, and after a stop at a fruit stand, we end up with Matt and Foggy at the grave of Battlin' Jack Murdock.  That would be Matt's father, and the visit is on his birthday.

Along the way Waid spells out what Matt's enhanced senses allow him to experience, and also clearly what his radar sense is and is not.  The visuals by Martin are brilliant.  Waid had stated in interviews that the city itself would be treated as a supporting character in the series, and that is used to great effect here.  At his father's grave, Matt answers Foggy's unspoken question - why has Matt been acting so uncharacteristic of himself lately?  Matt's answer is that, despite everything, all of the misery, pain, and grief of the past few years, he has chosen to cope by living in the moment, enjoying life to the fullest.  Foggy, no doubt worried about his friend's sanity, is not sure about all of this.

I think this upbeat approach by Waid was a good choice.  There's only so many times you can go to the same well and still get water.  The Miller approach has been used over and over and arguably reached its nadir with Shadowland, which preceded Waid's run.  "Daredevil possessed by a demon" got glossed over in short order.  Waid didn't spend a lot of time dwelling on it, and I can't say I find any fault with that.

It's so nice to see a Daredevil comic that isn't just endlessly rehashing Miller's beats. Over the last 20 years, that's pretty much what we've gotten from the title.

That is something I've read/heard a lot, but I just don't see it. I've read most Daredevil comics in the past 20 years, and just about all of them since Kevin Smith's run back in '98. Sure some stories have gone back to the Miller well, but I would say most of them haven't.


Then again I'm an unabashed DD fan, and I might just be blind (hehheh) to it.


All that being said I absolutely loved this series. I wish I could add a lot more to this discussion, but man these weeks seem to be coming up faster.

Daredevil #1 begins with a nice little recap of DD's origin.  A good feature, as any #1 issue will be someone's intro to the character.

Very true...  although, I guess the days where any issue could be someone's first are long gone.

A tip of the hat to Waid and Rivera for being imaginative with DD's radar sense.

I'm curious, has the Spot generally been portrayed using his powers that well?  The use of the character here is pretty freaky, especially when you see more than two hands popping out.  This is also one of the cases where we don't actually see Daredevil beat the villain, yet it still seems satisfying.

DD saves the day and takes his reward, a deep kiss from the blushing bride, signalling from the outset this will be a fun series.

Not to mention that DD likes to live dangerously in more ways than one.

A great little story with a good cliffhanger.  To see Matt Murdock with a sly sense of humor is wonderful.

I really enjoyed Matt's characterization generally, but I thought the first issue's backup tale crossed the line into obnoxiousness.  It did a fantastic job showcasing his senses, distilling the history, and setting the agenda, but the humor went from entertaining to irritating.  I'm glad it was better balanced throughout the rest of the book.