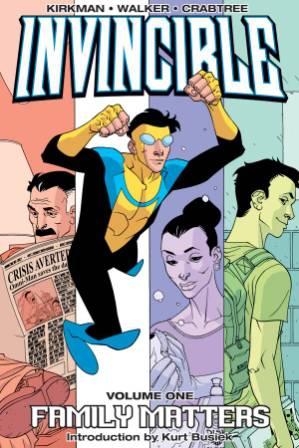 I first heard about Invincible around 2003 or 2004 when I had only been back in comics a few years. I didn't know much about the series and at the time was only interested in Marvel and DC so I didn't pursue it. It wasn't until 2007 that the series was recommended to by my a co-worker at the time. I picked up the first trade and was hooked.

This series starts simple enough. We meet Mark Grayson, an average teenager. The only thing is, his father is the world's greatest hero, Omni Man! Mark has yet to develop powers yet but in the first issue they start to kick in. The rest of the volume we get the typical superhero story. Mark learns how to use his powers, gets a costume, joins a team and must solve a crisis.

The first volume is fun. While nothing particularly earth shattering happens it's still an enjoyable read. What is most successful about this particular entry is that the majority of the supporting cast is established. We get a good example of what each character means to our main character and how they fit into this world.

The art is pretty good but in later volumes Ryan Ottley takes over pencil duties and it becomes a vast improvement.

Something you might notice is that the majority of the volumes are titles after old sitcoms. It's a fun thing and the titles do fit with the content contained within.

You might wonder how this series has remained so popular after reading this first story. Stay tuned, each volume we get the bigger picture and it becomes one wild ride.

So what do you think about this series?

I just bought this on Comixology so I can participate in the discussion.  After I read it today, I'll post some thoughts.

Just in time for our Invincible discussion, Comixology is having an Invincible sale.  The Family Matters tpb is only $2.99!

I read the first issue last night.  I was very impressed with the Kirby-esque splash page and a little disappointed the rest of the issue didn't match that, but the art was overall fairly decent.  I found it reminiscent of Ultimate Spider-Man at times, which is not a bad thing per se, but gave it an almost too familiar feel.  USM had debuted only two years earlier.  There were also elements of Silver Age DC in there - the scenes with the father, and the scientist who designs the costumes evoked that feeling to me.  It feels like there needs to be something unique to it to counter all of the derivative elements, and I'm assuming it did as the series is still going strong a decade later.

No one else besides Jason and I are reading Invincible?

Permalink Reply by Jason Marconnet (Pint sized mod) on April 23, 2014 at 11:46am
Since the schedule got changed they have another week to catch up.

Read issues 2-4 yesterday, so that's the rest of the trade.  As a story, Family Matters is a nice set-up that left me wanting more.  Things seem to be going a little too well for Mark Grayson so far, and I know from reading comments on the net here and there that it doesn't last.

The Comixology sale on Invincible actually ended Monday, so I'm sorry if anyone saw my post after Monday and missed out.  The individual issues are $1.99 (regular price), so for just under 8 bucks you can all four issues that make up this trade.

It was strange going back and rereading the first four issues of Invincible.  I was really struck by how much the tone has changed over the course of the series.  These four issues, like John said, have quite a silver age DC / light teen book feel to them, quite a change from the more Marvel / soap operatic feel of the current crop.  Plus, no over the top gore and violence, (although I think that starts up within the first twelve issues).  Still a good chunk of main characters get setup, and a couple of big recurring villains appear early, (not exactly auspicious beginnings for them, but like Invincible, they'll develop).

Knowing the big twist that's coming, I was on the lookout for some foreshadowing.  While not much seems readily apparent, there was a panel in the third issue that suggests there might be more under the surface.  Otherwise, the protection ball in the second issue looks like a mini Death Star... does that count?  I guess if there was too much foreshadowing, the subverted premise wouldn't have worked quite as well.

I'm usually pretty bad at spotting Easter Eggs, but I did notice a couple of them, plus a couple of cameos for characters that will be introduced later.  Charlie Brown was one of the casualties in the mall, the ultimate Charlie Brown luck, and Bill, (from "Bill and Ted's Excellent Adventure), was a student at Mark's school.  As for cameos, Allen the Alien made a panel appearance in the second issue and Science Dog was on Mark's walls from the beginning.

I finally finished reading these first 4 issues today, and there were a bunch of "oh yeah" moments. Just little things I have forgotten in the years since I read these. Like Mark having a job, his dad being kidnapped, the whole Teen Team thing.

I get what Jason is saying about the art. The wrinkles Walker puts on people are too dark of a line, and are too severe (zig-zag lines). Also, he has lines in weird places on people to. Like a curlicue on someone's nose.

I had quite a bit of fun revisiting this series.