The Weird, the wacky and the wonderful: Three graphic novels to make you say "What th--?"

Sept. 9, 2021 — The Teetering Tower of To-Review is once again in danger of falling over and destroying the city, so let’s pull out some graphic novels to relieve the pressure. Today’s theme: Books that are unusual, even by my standards. 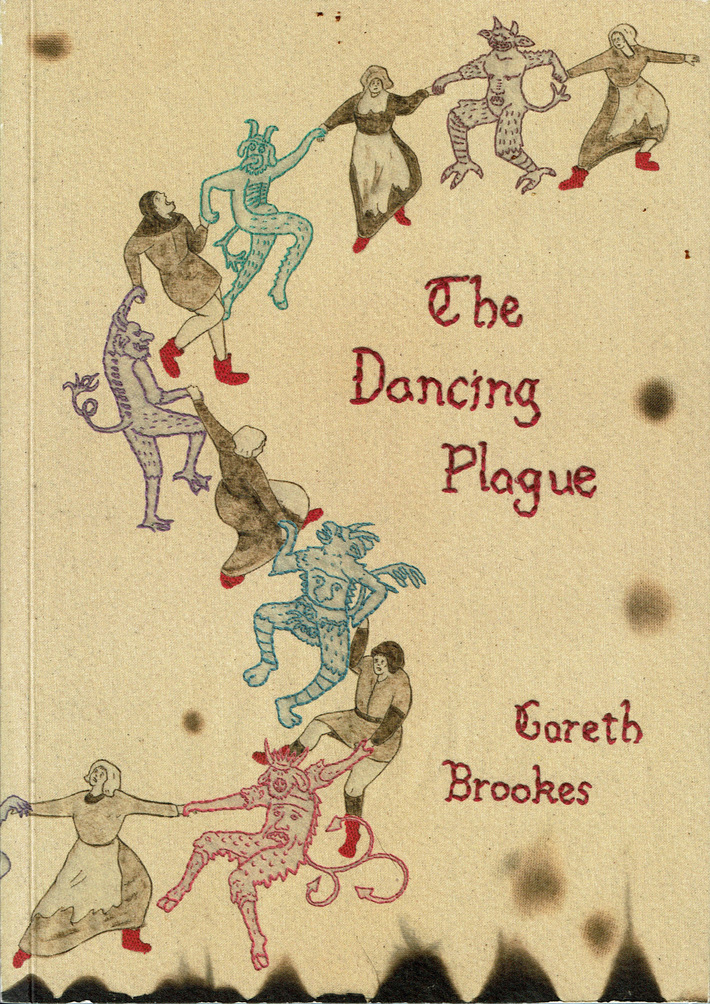 The Dancing Plague tells a story that would probably make a lot more sense to someone 600 years ago. (Cover art Gareth Brookes, copyright SelfMadeHero)

From the description: “Set in 1518, and told from the imagined perspective of Mary, one of the witnesses, The Dancing Plague tells the true story of when hundreds of Strasbourg’s inhabitants were suddenly seized by the strange and unstoppable compulsion to dance. As difficult to interpret now as it was then, the story of the ‘Dancing Plague’ finds suitably extraordinary expression in the utterly unique mixed-media style Gareth Brookes has devised to tell it.”

To which I reply: This is one seriously weird book.

First, Brookes appears to create his comics via pyrography, defined as "a method of making drawings or designs by means of heated implements." The effect is unusual, and middle ages-looking, compounded by flesh-toned, heavy stock paper.

Secondly, Brookes spends most of the book's pages exploring life in medieval times, as opposed to just focusing on the Dancing Plague. And the times, they were a-different. For example, the book opens with a woman hovering over a chamber pot, with her husband urging her to "make haste," as he needs to go as well. The banter between them is cheerfully profane, and when both are finished, they toss the results out the window — where it strikes a passing knight, who has some choice words, as well.

That’s just the first couple of pages. The whole book is a window on a strange world before the Enlightenment, before indoor plumbing, before humans really knew how the world worked.

And since they don’t, they ascribe supernatural explanations for everything at a near constant clip — some based in religion, some in folklore, some in explicable local customs. And this “magical realism,” for lack of a better term, is embraced by the author: Characters freely hallucinate (of severed Christ heads bleeding on the countryside, angels and devils falling in flames from some imagined battle in the sky, rising rivers of blood that no one seems to notice).

The plot also embraces the supernatural; when a man takes his daughter into the woods to kill her (he thinks she’s a witch), she avoids him by hiding underwater. For days. This is left unexplained, unless you simply accept that 600 years ago you could breathe water if you really, really needed to.

Then there’s the language! In addition to the “cheerful profanity” throughout, the characters are constantly blaspheming. And really creatively, too! I can’t really quote any of funniest ones, but can I note for argument’s sake that one characters swears on the foreskin of Christ? The foreword helpfully informs us that this would not be considered blasphemy at the time, as such objects (whether real or not) were widely worshiped relics.

So do I recommend it? I guess, but it depends on your comfort level for the above. I’m pretty thick-skinned, but even so I raised an eyebrow now and then.

Did You Hear What Eddie Gein Done? 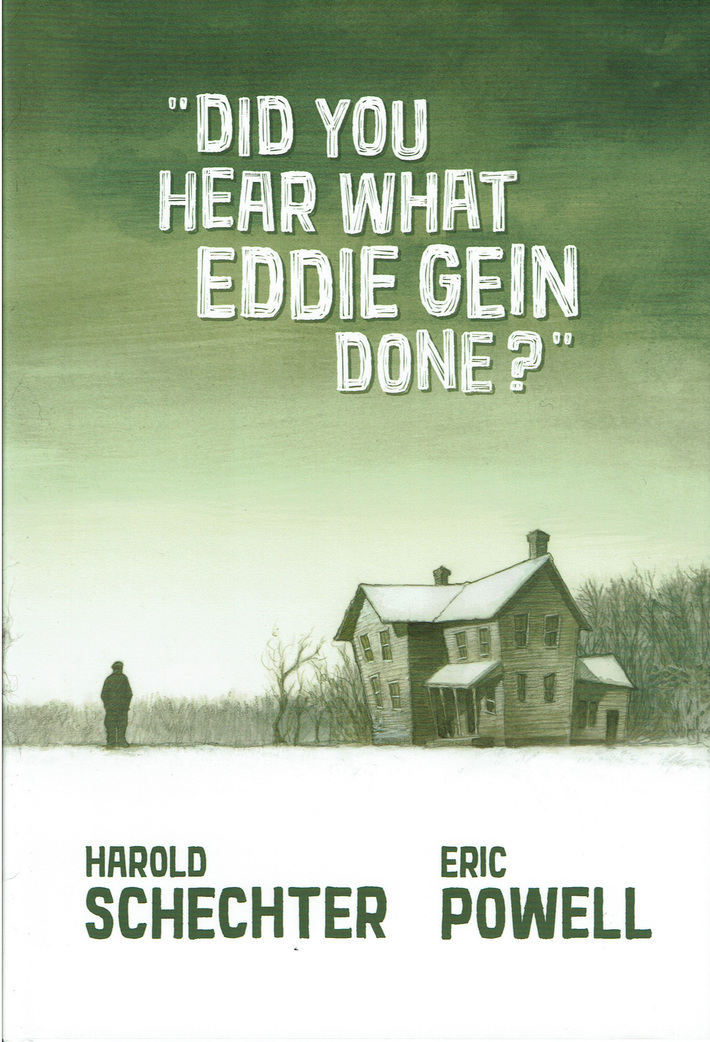 You, too, will sleep more poorly after you hear what Eddie Gein done, from the superstar team of Harold Schechter and Eric Powell. (Cover art by Eric Powell, copyright Albatross Funnybooks)

Not many people have heard of Eddie Gein, but he’s the true-life figure who launched a thousand horror movies. Gein’s deranged behavior and bizarre obsessions in early 20th century Wisconsin gave rise to Alfred Hitchcock’s Psycho, The Texas Chainsaw Massacre, The Silence of the Lambs and God knows how may B- and C-list horror movies and film franchises.

I’m not familiar with Schechter, although he does seem to have done some painstaking research. I am very appreciative of that.

However, I only thought I was familiar with Powell, as I have plenty of his work in the Comics Cave. But formerly I enjoyed his work for what I interpreted as a mid-century MAD vibe from the magazine’s movie and TV parodies. But here in Eddie Gein, I see he is far more than that. Yes, the Mort Drucker and Jack Davis influences are still obvious. But through his superb use of wash, spot-on caricature and superior draftsmanship, Powell leaves the MAD masters in the dust to claim a spot on the cartoonists’ Mt. Rushmore himself. I had no idea he was this good, and am tempted to re-read the book just for the art.

Of course, I have to steel myself to do that. This is a pretty shocking book.

Serial killers are so chockablock in today’s entertainment that I’m almost inured to them; they kill people, sure, and sometimes on screen, but by and large I don’t think much about the fact of what they’re doing as I do to how what they’re doing advances the plot. These emotional calluses have formed from decades of serial-killer movie and TV shows going back to, yes, Psycho, The Texas Chainsaw Massacre and The Silence of the Lambs.

But now here, with Ed Gein, is the real deal. Not only is Gein far worse than any of his cinematic copycats, but his perversity is so extreme and inexplicable as to be almost alien. He wasn't just a killer or a cannibal or a necrophile — yes, he was all those things — but his needs came from a place so perverse that my brain can't make sense of it.

And neither will you, once you heard what Eddie Gein done.

Queen of the Ring: Wrestling Drawings by Jaime Hernandez 1980-2020 HC Artist Jaime Hernandez has been acclaimed for decades as the most talented artist in Los Bros. Hernandez trio of creators, who together have created the wonderful, semi-magical Love and Rockets, an anthology series featuring an ensemble of an instantly recognizable characters from both rural Mexican towns and the urban barrios of Los Angeles.

It’s hard to define what makes Hernandez’ so art so pleasing to the eye. There seems to be some influence from Archie Comics giant Dan DeCarlo, but I just can’t put my finger on it. His figures are cartoony but not cartoonish, well rendered but not over-rendered, pleasant to look at but not Hollywood pretty.

Once again, he is an artist I thought I knew, since I snatch up anything he draws. But little did I know Hernandez has a secret love: 1970s women’s wrestling and lucha libre!

So much so that he has been doodling, and then re-doodling, and then refining and then finally finishing page after page of beautifully rendered scenes of 1970s women’s wrestling. Never intended for publication, they are rendered with casual tools — colored pencils, markers, felt-tip pens, etc.

The art is beautiful. The subject matter is inexplicable.

The question that will nag virtually everyone through this book is, “what is Jaime’s fascination with 1970s women’s wrestling?” It’s not like these women are gorgeous; they are all heavy, middle-aged and with big ‘70s hair. It’s not like what they do is real; no, like all professional wrestling, it’s fake.

Hernandez doesn’t really explain. From the few personal observations he lets slip into the minimal copy — which is mostly concerned with technique and timelines — you get this:

“When I was six or seven, the whole neighborhood, the gang, always watched wrestling and talked about it the next day,” he wrote. “My brothers said, ‘We should watch wrestling, our cousins watch it next door.’ And we used to watch it with them a lot. I was just bugged by the women’s wrestling, not knowing why. The matches — in their holds, tossing each other around — the angles were just freaking me out. I didn’t know why, but they were.”

That’s it, that’s all you get. That, and pages of really beautifully, lovingly created, hand-drawn pages of women wrestlers.