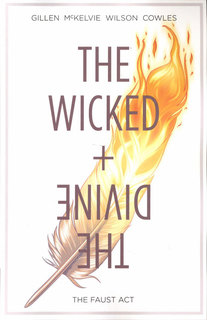 A story about twelve gods who incarnate as humans every ninety years, only to die two years later. They’re young, pretty, and adored: so naturally in our time they’re all pop stars. Something about the tone reminds me a lot of Grant Morrison’s The Invisibles, but there at least some measure of ambiguity about the reality of it was always present, while here it’s clear from the start that the godlike powers actually exist.

So the question is, how do young gods behave, and what do they do with the power? They behave like arrogant beings who have the world at their feet, and think they deserve it. They use their powers sparingly, just enough to bedazzle their fans. The rule is: gods can disagree among each other, but humans are not to be harmed. When Luci (short for Lucifer) seems to step over that line by murdering some gunmen, then a judge while on trial, that compact appears to be broken. The resolution is the core event of this arc, the first five issues of the series.

We first encounter the gods through superfan Laura and a skeptical journalist named Cassandra (likely a reference to the woman given the power of prophecy, but cursed to never be believed). Cassandra is initially completely skeptical about the god-powers, writing them off as posing and special effects. By the end she’s seen enough to be convinced, and Laura seems to be actually experiencing them…

Somehow Gillen and McKelvie keep these essentially unlikeable characters interesting, and the mortals who are close to them help to keep things on a human level. I’m very interested in seeing where the series goes from here. The collection includes a lot of supplemental material: all of the alternate covers, the two-page teaser story, and more.