The Wrath of the Spectre Omnibus

This hefty tome can be broken into three sections (the 1960s, the 1970s and the 1980s), and that's how I'm going to handle it. the introduction by Peter J. Sanderson is dated 2005 and was obviously originally written for an earlier collection of the 1970s material. But it's the 1960s material I'm  most interested in. We have discussed the 1960s era Spectre on this board from time  to time in the past, and I remember some not too kind things being said about it. I was eager to read, though, so some time ago I bought a "DC Showcase Presents" edition just so I'd have it, but I really wanted it in color. I'm glad I waited.

It starts with three tryout issues of Showcase (#60-61 and #64) by Gardner Fox and Murphy Anderson. I'd buy anything by Fox and Anderson, and the first two of these comics I would rank among the best of any DC Silver Age comics. (The third didn't appeal to me as much, but they can't all be winners.) Fox's stories were steeped in science, history and the occult, heady stuff indeed for his presumed audience. Two more tryout issues appeared the next year in The Brave and the Bold, #72, a Flash team-up  by Bob Haney and Carmine Infantino, and #75, a Batman team-up by Bob Haney and Ross Andru.

After that, the Spectre was awarded his own series. What I found to be the oddest thing about this series is that Jim Corrigan and the Spectre are treated as two entirely different characters, but linked (as Rick Jones and Captain Marvel were over at Marvel). I don't know this for certain, but I suspect the reason for this had something to do with the Comics Code Authority. The death angle was downplayed, and whenever it was mentioned, the word "died" was put in quotation marks. "Common knowledge" has it that no one can draw other dimensional planes like Steve Ditko. It may be true that no one else draws them quite the same, but it doesn't mean no one else can draw them at all. I found Jerry Grandenetti's to be similar to Ditko's, yet uniquely his own.

I don't think the stories were any better or worse than other's of DC's Silver Age, but I think I can identify why they are commonly perceived to be of lesser quality. For one thing, the series is bi-monthly and there was very little if any continuity of through storylines. Even more importantly though, there was no consistent creative team. Only twice did the same creative team handle two consecutive issues, and those instances were by two different teams. Here's how it breaks down...

The story in #3 guest-starred Wildcat and read very much like a team-up from The Brave & the Bold. The Adams (solo) issues were just plain weird. Murphy Anderson provided a consistency of inking in issues #6-8. After that, the format changed and the story quality tanked. The Spectre became almost a "host" in his own title as the format changed to several short stories per issue (three in #9, four in #10) of the mystery/suspense variety one would expect to find in anthology titles such as House of Secrets or House of Mystery, but with the Spectre becoming involved at the end.

NEXT: The 1970s Adventure Comics run

Having enjoyed The Spectre Showcase issues, then missing out on the debut issue of his own title, I grabbed Spectre #2 without even looking at the interior pages. I still remember the shock of what was my first exposure to Neal Adams art. Following after the refined, traditionalist approach of Murphy Anderson, Adams art was quite jarring.

I had the opposite reaction, Doc. I liked Anderson's work a lot for its clean lines and detail. But I also found it a bit stiff, managing to make the most outlandish scenes kinda pedestrian instead of exciting. I found him perfect for cerebral, science-based characters like Adam Strange and Hawkman, but not really showy or artsy-fartsy enough for The Spectre.

But in the mid-1960s he was sort of DC's go-to guy for Earth-Two characters, when they appeared solo.

I already had an appreciation for Adams, whose "photo-realism" was a revelation to the young Captain, when I discovered him ... wherever I discovered him. Probably Batman. And I may have read Green Arrow/Green Lantern before Spectre. Anyway I loved Neal "If superheroes existed, they'd look like I draw 'em" Adams on anything, so I loved him on Spectre.

Although even then Adams' reputation for blowing deadlines had permeated the fandom subconscious enough that even I was aware of it down in Elvisland. It came as no surprise that his stint was short, especially since he was writing and drawing. It probably took him six months to do those two bi-monthly books.

I had never been a fan of Jerry Grandenetti, whose work seemed to just be all over the place -- literally, with exaggerated limbs, distorted objects and lots of fog (of the '60s DC variety, which was just opaque cloud shapes). As an adult I've been able to ID some of Grandenetti's swipes, so now at least I know the effects he was trying to create. I think he generally failed, though, and was disappointed to see him on Spectre (as I was disappointed to see him on anything). Your mileage may vary.

And then Sparling? My disgust was complete.

I did enjoy seeing Wildcat get some exposure, although anybody teamed with The Spectre is going to be overshadowed to the extent that he might as well not be there. Still, my reaction was the same as Jeff's, that this was probably originally intended to be a Showcase/Brave and Bold try-out like Dr. Fate/Hourman and Starman/Black Canary, or at least in that vein to test the waters. Adding to this impression, I think Wildcat had a solo back-up story somewhere in this run, too.

I think Spectre actually showed up in some other places after this run but before Adventure. I could be wrong, but I seem to remember a three-parter in Ghosts right around issue #100 (97-99, if memory serves) and a couple of stories as a host in House of Mystery (which I realize now might have been intended for The Spectre #11, if the timing is right). In both cases, the naive young Captain was hoping this was the beginning of a new chapter for the Ghostly Guardian, but in both cases they fizzled out quickly, even before sales reports could have been received. So, again, I'm guessing they were intended for some other platform and just ended up as filler in DC's mystery line.

I don't remember if those stories appeared just after The Spectre was canceled, which would support my theory, or if they were after the Adventure run, which would not.

I always thought that the Spectre should be like a "heroic" Galactus.  He should never have been a regular in the JSA.  He should show up no more often than once every five years or so, and him  showing up should mean that something Apocalyptic ("The Apocalypse of Saint John the Apostle"-type "Apocalyptic") just hove into view.

Actually, Captain, it was Hourman who got a solo story in Spectre #7 with art by Dick Dillin.

And Ghosts #97-99 where the Spectre met Doctor Thirteen, the Ghost-Breaker (who was in for a big comeuppance) happened way after his Adventure run was over! 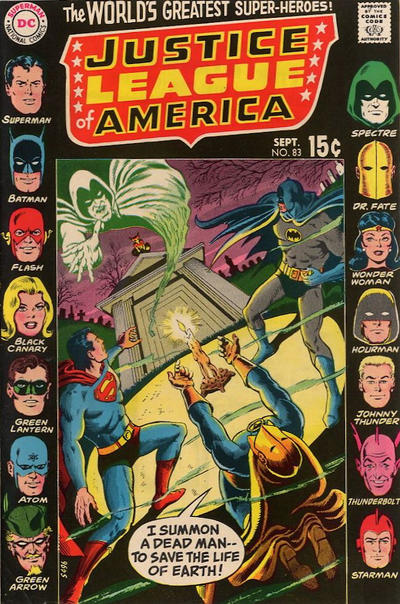 "Note: The reason The Spectre abides in this crypt may not be related now...Rest assured that the story is fearsome indeed!"

Possibly someone like Roy Thomas went back to this scene in one of his fits of retroactive continuity, but I certainly never saw it explained. A letter-writer in JLA #87 commented "if that fearsome story of Spec's entombment could not be related now, that's surely a promise that [it] will be related in the future", but I recall that my immediate reaction on reading that footnote was deeply cynical.  I would have given good odds that there was no reason, except to provide a dramatic cover, and that no-one (least of all author Denny O'Neil) had any idea of the story behind The Spectre's imprisonment.

Not only was the Spectre's imprisonment in that crypt in JLA #83 never explained but the Ghostly Guardian was shown with the Justice Society in #82 with no ritual and no mention of one!

At the end of #83, the Spectre is supposed to be "killed" or set free and he wouldn't reappear until Adventure #431.

Thanks for the correction, Phillip, about the Hourman back-up story in Spectre #7. I was thinking of the second story in Spectre #3, which GCD lists as a Wildcat solo story, although it shares a villain with the lead Spectre story.

And I have looked up the Spectre appearances I mentioned earlier. Phillip already looked up Ghosts #97-99 for me, which occurred after Fleisher's Adventure Comics run. I found two in House of Mystery, which I had read recently in the HoM v2 omnibus. As it turns out, when they appeared isn't even relevant, as both were reprints from The Spectre #9. I don't know if this is a commentary on the quality of those stories or my memory, but I have now read those two stories at least three times, maybe four, and each time I didn't remember I'd read them before.

Also, note to Jeff: The Spectre's Adventure run was canceled with three more stories already written and drawn. DC did  publish them later, in Wrath of The Spectre #4. That was four-issue reprint series, with only the first three actually reprints, of Fleisher's Adventure run.The fourth issue was all new.

"Spec"-ulations on the end of the Spectre's Adventure Comics run: His last issue was #440 (Jl'75) and was replaced as the headliner in #441 (S'75) by Aquaman which kept Jim Aparo on the book.

Not sure if there is a direct correlation but Super Friends was about to return (as repeats) in February 1976 and may have been shown as repeats earlier than that after its initial run ended in August 1974. It might be as simple as higher-ups wanted the Sea King in a more prominent role. Plus The All-New Super Friends Hour was scheduled for September 1977 so it should have been in the planning stages by then.