There was a Blackhawks movie serial?

I spotted this while looking for something else. Anyone ever seen it?

I've not seen it. Kirk Alyn, who played Blackhawk, also played Superman in the Superman serials.

There sure was.  I've got a video-tape copy of it.  It's been a couple of decades since I watched it, but I still recall a few impressions of it.

It's pretty low budget, even for a serial.  Probably because, as you pointed out, by 1952, the age of the serials was dying out and Columbia, which was notorious for its penny-pinching, probably didn't see the point in investing any more bucks into Blackhawk than it had to.

At least the film adhered fairly closely to the premise of the Blackhawk comic series---a band of international aviators, World War II veterans, who operate as a crime-fighting force.  And the costumers got the Blackhawk uniforms spot-on, so there was an easy recognition factor.

There are downchecks aplenty, most of them forced by the low budget.

Forget about Blackhawk Island or any exotic locales.  Everything in the serial seemed to occur in southern California.  Our Heroes operated out of simple hangars with an adjoining office located in some rural, but clearly American, outland.

Contrary to some reviews of the serial, all seven Blackhawks were included in the cast.  However---probably due to both budget and script limitations---most of them got shunted into the background.  Blackhawk and Chuck and Stan carried the principal action.  When the film wanted to show that the squadron had more than three guys, André and Olaf appeared, in group scenes showing the Blackhawks planning their next move and, occasionally, in a major fight scene.

Hendrickson and Chop Chop fared the worst; theirs were little more than bit parts.  They portrayed the Blackhawks' support crew and didn't even get to wear the uniform.  Hendy was the team's mechanic and Chop Chop was, essentially, the office boy and general factotum.

There weren't any spectacular shots of the Blackhawks in flight, either.  I don't recall any scene in which the five aviator Blackhawks flew in separate planes, in formation.  There may have been one or two, but they were so minor that they've eluded my memory.  Usually, the team flew in one or two transports, and when there was more than one plane, they established that by cutting back and forth between the cockpits, rather than showing the planes flying in tandem.

Of course, that's because renting planes and hiring pilots to fly them would have cost big bucks.

There were some casting shortfalls, as well.  For a band of "international" aviators, all of the team spoke plain American English.  In all honesty, I don't remember if Weaver Levy, the actor who portrayed Chop Chop, provided the typical-for-the-time "oriental house boy" exaggeration or played the rôle straight.  But the rest of the team was about as international as Roger Ramjet's American Eagle Squadron.

It also would have been nice if they had hired actors who, at least, conformed in general features and body types to their comic-book analogues.  You can Google several stills from the serial, and except for Blackhawk and Chop Chop, it's impossible to match the movie character with his comic-book counterpart.  Curiously enough, Frank Ellis (Hendrickson) and Weaver Levy (Chop Chop)---the two members who were put on the back bench for the serial---most closely resembled the comic-book versions.

Lastly, in my opinion, Kirk Alyn was miscast as Blackhawk.  Oh, his acting was first rate, as it always was.  But, outside of having wavy black hair, he didn't fit my image of Blackhawk.  Alyn was too refined, too collegiate. It was tough to envision him as a war-experienced, tough-as-nails leader.  The part called for an actor with a little more grit, like Charles McGraw or James Craig (or a couple of others who won't occur to me until long after I post this).

All in all, the serial Blackhawk is a pretty pedestrian work.  As with most serials, the script is padded with illogical detours in order to fill out the requisite fifteen chapters.  That can be made to work in a keenly plotted story (c.f., the Adventures of Captain Marvel serial), but here it was just boring.  The thing I remember best about the serial is it took a forced effort on my part to see it through to the end.

I guess they had a hard time doing comic book adapations even back then.  And no Lady Blackhawk.  Though that is understandable she didn't show up in the comics until 1959, my mind fairly reels with the casting possibilities.

There's a page with information on earlier "Lady Blackhawks" here. Sugar and Sheila wanted to be Blackhawks. I believe each only appeared once, although their stories left open the possibility that they would return. Sugar didn't get to wear a Blackhawk costume. Eve Rice was a photographer who appeared in Military Comics ##34-36. I think she wanted to hang out with the Blackhawks rather than join them. Fear/Madame Fear appeared intermittently in the post-war 40s.

In her Birds of Prey debut I think Zinda was retconed to have been part of the Blackhawks in WW2. 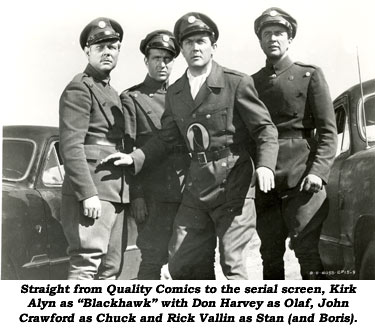 If you Google "Kirk Alyn as Blackhawk," you'll see a few more images.

You can watch the whole thing here: