The first print Marvels arrive since late April, on May 27.

Bleeding Cool posted a press release from Yen Press alerting me to the fact that the publisher was releasing a great many manga on May 26. The list on Bleeding Cool didn’t match the one on the Yen Press website, so I went with the latter. Anyway, there are a great many Yen Press books listed on May 26 — catching up with what didn’t get released during the pandemic, I’d guess.

DC’s Legends of Tomorrow looks like a good one this week, where the cast in trapped in various TV shows — including Star Trek the original series!

Diamond has Superman/Batman Omnibus v1 listed, but Instocktrades doesn't, and Amazon says it will arrive on July 16. I'll be curious to see if it arrives or not.

The Wonder Woman: Tempest Tossed YA OGN is supposed to come out this week, according to all my PR, but neither DCComics.com nor Diamond lists it. Both DCComics and Amazon list it for June 2, which also implies a May 27 ship for comic shops (which receive books six days before Amazon). Dunno what to make of that.

He-Man and the Masters of the Mulitverse #6 (of 6)

The Alchemist Who Survived Now Dreams of a Quiet Life Vol. 3 (light novel, $14): The Labyrinth's subjugation is close at hand, and the city's chemists are more knowledgeable than ever before. All of this could be credited to the efforts of a certain alchemist, puttering around in her little atelier. As Mariela works her magic on the city, those around her begin to confront change: Sieg is honing his combat skills to become an A¯Rank adventurer, while Lynx is starting to come to terms with his feelings for Mariela. And even though no one promised that these carefree days would last forever, Mariela has never once thought to question it, basking in the warmth of her favorite people at Sunlight's Canopy...

The Asterisk War Vol. 13 (light novel, $14): One year has passed since the fierce battles of the Gryps tournament, and now all the schools are preparing for the decisive moment of the Lindvolus, the Festa of Festas. Ayato is taking part to save Haruka's life; all his training has led up to this. Meanwhile, his previous partner, Julis, has her own reasons why losing is not an option. The two parted ways when Julis decided training together would be unwise, and their relationship hasn't yet recovered. With such a strong field of competitors, Madiath Mesa declares this will be the greatest Lindvolus in history...!

Death March to the Parallel World Rhapsody, Vol. 11 (light novel, $14): Though Satou's stay in Labyrinth City got off to a rocky start, he's determined to put Celivera on the road to redemption! Acts of charity, such as founding an orphanage and putting the Plunderer King behind bars, are no big deal for him. But despite his best efforts, mysterious drugs continue to circulate. Incidentally, the noble in green, Sir Poputema, has been acting rather suspicious lately. Could he be linked to the spike in demonic activity...?

Death March to the Parallel World Rhapsody, Vol. 9 (manga, $13): Looking to deliver a letter from the Witch of the Forest of Illusions, Satou and his party decide to visit the village of the forest giants. He soon finds the villagers are still recovering from hydra attacks, including three children who were poisoned by the hydra's toxic breath. As Satou gets to work on brewing an antidote, Karina ponders how she can enlist the giants' assistance in ridding her hometown of the demonic presence that plagues it...

Happy Sugar Life, Vol. 5 ($13): If you love someone you eat candy together…bathe together…hug, kiss, and stay by their side for the rest of your life…Doesn't everyone think so? Experience the next installment of the psychotic romance between Shio and Sato. Life is bitter, but love is sweet.

I've Been Killing Slimes for 300 Years and Maxed Out My Level, Vol. 2 (manga, $13):  After 300 years of a laid-back life, witch Azusa's peace is interrupted by a host of wacky challengers after the word spreads that she actually is ridiculously strong. What sort of adventures and new friends will her rapidly expanding family encounter in the next volume?!

Im: Great Priest Imhotep, Vol. 3 ($15):  The Ennead Priesthood has given Im a new objective: Return to Egypt and use "Damnatio Memoriae" to wipe the record of Prince Djoser clean from the record of the world. But when Djoser suddenly shows up-in the flesh?-the plan is forced to change. How will Im cope with seeing his friend again…when his only option is to kill him…?

Kakegurui Twin, Vol. 6 ($15): Will Mary enter the Full-Bloom Society or will she become Juraku's pet? As Mary struggles with this choice, an unlikely ally appears!

Karneval, Vol. 10 ($20): Yogi reclaims control over his body and returns to Circus's ship, along with his long-lost sister Mieux-Marie, but many difficult choices await the two of them. And Karoku's memories of the time he and his mother spent in the Rainbow Forest after fleeing their hometown of Karasuna provide insight into Nai's origins…

The Melancholy of Suzumiya Haruhi-chan, Vol. 12 ($13): The series is over-but Haruhi-chan's antics will never be! Fueled by her now-legendary melancholy, the absurd adventures of Haruhi-chan continue, utterly unbound by the laws of reality! Cozy up under the kotatsu with Haruhi-chan and the Brigade-for as looong as you like. Take flight with Haruhi the superhero as she swoops in to save the day...on her own terms! Bask in the obligatory swimsuit chapter! All leading up to the final chapter! And the final chapter! And the stunning Final Chapter!!!

A Mysterious Job Called Oda Nobunaga, Vol. 1 (light novel, $15): In this world, on the day that they reach adulthood, everyone visits the temple to receive their life's calling. Many will become warriors or magic users. But when the frail younger brother of a minor feudal lord named Arsrod goes in for his job, he comes out with…Oda Nobunaga?! Not only has that job never been heard of, not a single person can even figure out what it's supposed to mean. But when this young man inherits the experience, tactics, and prowess in war of the great Sengoku strategist Nobunaga, his very destiny will change!

Nightschool: The Weirn Books Collector's Edition, Vol. 1 ($24): Schools may lock up for the night, but class is in session for an entirely different set of students. In the Nightschool, vampires, werewolves, and weirns (a particular breed of witches) learn the fundamentals of everything from calculus to spell casting. Alex is a young weirn whose education has always been handled through homeschooling, but circumstances seem to be drawing her closer to the Nightschool. Will Alex manage to weather the dark forces gathering?

Nyankees, Vol. 6 ($13): Ryuusei's the cat on top after beating Madara, but some news about Gekka takes the wind right out of his sails…The story of street cats wraps up in the final volume of Nyankees!

Overlord, Vol. 12 (manga, $13): At last, Demiurge's schemes in the Kingdom begin to bear fruit. With the appearance of a powerful fighter that skillfully controls insects and the enigmatic Jaldaboath, the beleaguered humans must rely on none other than the Blue Roses!

Strike the Blood, Vol. 15 (light novel, $14): Velesh Aradahl, chairman of the Imperial Assembly of the Warlord's Empire, has made his move. With his vast combat experience and boundless knowledge of primogenitors past, he's shaping up to be one of Kojou's toughest opponents yet! The clock is ticking. Can Kojou defeat his latest adversary before Itogami Island ceases to exist in only twelve short hours?!

Suppose a Kid from the Last Dungeon Boonies Moved to a Starter Town, Vol. 2 (light novel, $15): To prepare for the sorcery tournament, Lloyd works hard to hone his magical abilities, even as he struggles with his super-low self-esteem. But when he pulls out a legendary holy sword as he's picking up some trash, the competition takes an unexpected turns!

Trinity Seven, Vol. 20:  The Seven Magicians ($13): Thanks to Arbariccia's counter-strategy, Arata is trapped in a library of nostalgia. Can he escape that calm and gentle world?!

The official cover for Woof Woof Story: I Told You to Turn Me Into a Pampered Pooch, Not Fenrir!, Vol. 2 published by Yen Press.

Woof Woof Story: I Told You to Turn Me Into a Pampered Pooch, Not Fenrir!, Vol. 2 (manga, $13): After being reincarnated as a pampered pooch, Routa's been living a sedentary life. But when his owner suddenly falls ill, what's a canine to do?

Blackwood Mourning After #3 (of 4)

Batman and the Outsiders #12

He-Man and the Masters of the Mulitverse #6 (of 6)

Revisit the summer of ‘94 with writer/artist Axelle Lenoir! With just two months left before college, Elodie is forced to take a job as a camp counselor. She doesn't know the first thing about nature, or sports, or kids for that matter, and isn't especially interested in learning... but now she's responsible for a foul-mouthed horde of girls who just might win her over. Just as Elodie starts getting used to her new environment, a dark mystery lurking around the camp begins to haunt her dreams.

Join two of the most popular new characters from Sonic's world in this classic odd-couple team-up adventure! Tangle the Lemur's got a problem: there's not enough action in her life! Whisper the Wolf's also got a problem: she's hunting down an incredibly dangerous enemy named Sonic the Hedgehog! Can Tangle and Whisper help solve each other's problems, or will they just make things worse? By Ian Flynn, Evan Stanley, and more!

Bird & Squirrel v6: All or Nothing

Cats Are People Too TPB

Dancing At The Pity Party GN

My Dress Up Darling v1

Not A Place To Visit GN

We Should Improve Society Somewhat TPB

Interesting.  I thought the "final" on this cover meant it was the last one. 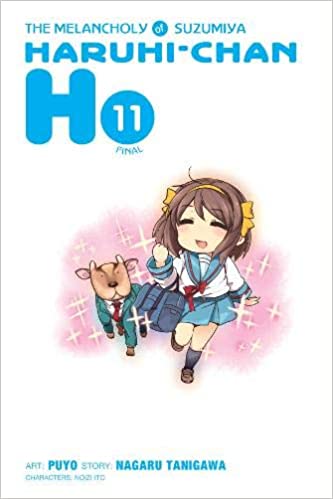